But a high school teacher’s insistence that he reconsider it and watch a documentary called “Tapped” made him rethink the choice. These days Parker is one of the main drivers behind a campus-wide push at William & Mary to encourage the use of tap water and reusable bottles.

“This is something that is so important to me,” Parker said.

He is heavily involved in two groups that are finding ways to make tap water more accessible to anyone looking for it. The W&M Office of Sustainability currently has a plan underway to install at least one water bottle filling station in every high-traffic building on campus, while student group Take Back the Tap is assisting in that effort as part of its overarching work of promoting the drinking of tap water.

Calandra Waters Lake, director of sustainability, said that so many individual requests for Green Fee funds for bottle-filling stations were coming in that a decision was made last spring to consolidate them into a regular part of the funding.

“We realized that we needed to just step in and say we need to be more strategic because clearly there’s a need,” said Waters Lake.

The stations include a bottle-filling apparatus in the back of a regular water fountain, designated by the bottle-shaped outline visible there. When a bottle is placed underneath the stream, the unit fills the bottle quickly and automatically shuts off when the bottle is full.

The stations contain a digital counter that displays how many plastic water bottles have been saved from landfills or recycling by the use of that particular unit.

Under the new plan, the Committee on Sustainability works with Take Back the Tap and facilities management to identify the buildings that need stations, obtain price quotes and prioritize where and when stations will be installed.

Parker and Director of Operations and Maintenance Greg Shipp lead the working group for that project. Currently there are 52 filling stations on the W&M campus and three at W&M’s Virginia Institute of Marine Science, with six stations added last year and four so far this year.

Building specifications for new buildings and major renovations on campus now include a requirement for at least one bottle-filling station, and facilities management has committed to the ongoing upkeep of the stations including changing the filters, according to Waters Lake.

So the group is working to get stations into existing buildings that don’t have them.

Partnering with sustainability is Take Back the Tap, a student group that’s part of the W&M Student Environmental Action Coalition.

W&M Take Back the Tap, a chapter of Food and Water Watch, won the per-capita category of that organization’s Tap-a-Palooza national college campus competition in 2016 and 2017 and received $1,500 each time that was used for two new bottle filling stations. For the contest, college campuses compete against one another to see which one can get the most students to take a pledge to drink only tap water.

Among the reasons for this are elimination of plastic disposable waste, money savings and convenience. 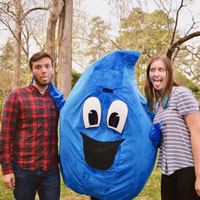 “I’ve always sort of seen using disposable plastic water bottles as an issue,” said Megan Gillen ’20, who has been among the leaders of Take Back the Tap and has explored the water issue since she’s been at W&M.

“I saw it as a simple problem and didn’t understand the complexity behind it. I learned how multi-dimensional and inter-disciplinary it is — really an economic and environmental problem.”

Parker said that Take Back the Tap decided to focus on helping facilitate the installation of additional bottle-filling stations because several student surveys showed that people wanted them.

“People genuinely are much more likely to use reusable bottles with those than just the water fountain,” he said.

The stations serve as a reminder that tap water is easily accessible.

“It helps promote a healthy drinking option, and you see them in a lot of places outside of William & Mary,” Waters Lake said. “They’re popping up in airports and gyms everywhere, and it’s something that’s becoming much more prevalent. As people use them elsewhere, we’ve seen the desire for them on campus rise.

“People want this sustainability feature in their buildings, and we’re working to meet that demand.”