The city of Ife has been significant to the Yoruba people of West Africa for as long as they can remember. It was briefly abandoned in the 19th century, and Gerard Chouin says the Yoruba repopulated the town, likely drawn back to the deserted site because of its cultural and religious significance.

“It’s like Rome,” he explained, “Rome in the medieval period, when the pope was not only the religious head, but also like a king.”

Ife, now known as Ile-Ife, has been the historic seat of the pope-king of the Yoruba. This individual is known as the Ooni, a venerated position that extends back for centuries, Chouin said. There is an incumbent Ooni in Ile-Ife today; he has a web site.

“A lot of things have changed,” Chouin said. “You can meet the Ooni, which you could not do a few centuries ago, even up until the 19th century.”

Chouin is an assistant professor in William & Mary’s Lyon G. Tyler Department of History. He is a member of an international team of scholars and scientists returning to Nigeria in June to probe the mysteries of Ife and an even more enigmatic place known as Sungbo’s Eredo, using a combination of traditional archaeology and scholarship combined with high-tech tools such as drones and DNA analysis. Both sites were large urbanized places in medieval times. Sungbo’s Eredo was abandoned and no one knows why. Chouin hopes to find evidence to support his belief that the bubonic plague was as destructive a force in urban Africa as it was in the cities of Europe. 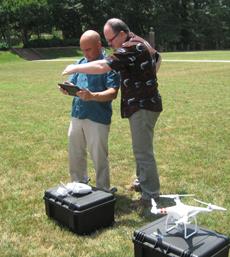 The two locations present a contrast in challenges for scholarship. The once-deserted Ile-Ife now has a population of more than half a million. The name Ile-Ife, Chouin said, hints at the draw the locality has for the Yoruba.

“‘Ile’ means ‘home’ in Yoruba. So it’s home of Ife — the ancient town of Ife,” he explained. Yorubaland has long attracted the interest of European scholars, but Chouin said even urban Ile-Ife has seen very little professional archaeology. He said Europeans were intrigued by the artistic works found in the area. Art objects brought 20th-century scholar-explorers, notably the German Leo Frobenius, to Ile-Ife.

“The art baffled the European world, because when they were discovered, they looked in their minds so much like Greek sculptures. They were not at all like what they were expecting from African sculptures,” Chouin explained. “So for a very long time in the 20th century, there were all these theories about the art of Ife being actually being brought by foreigners — all kind of stories.”

The stories are essentially Eurocentric and often fanciful — Frobenius maintained that he had discovered Atlantis. But Chouin is interested in the real history of Yorubaland, where oral traditions abound. He said that one of the most reliable sources on the land and its people is a compendium written by a Yoruba who shares a name with the great 18th century English lexicographer.

“Samuel Johnson was a Yoruba who was trained as an Anglican pastor. He picked up an interest in gathering and writing down the history of the Yoruba,” Chouin said. Johnson’s British printer misplaced the manuscript, but his brother rewrote the book and A History of the Yorubas from the Earliest Times to the Beginning of the British Protectorate was published in 1921, years after Samuel Johnson’s death.

Centuries of urbanization have made much of modern Ile-Ife inaccessible to archaeologists, but some features still figure in everyday life in the town. The ancient Yoruba had developed a solution to at least one aspect of living in a tropical rain forest.

“The public courtyards were actually covered with pavement. They were paved with potshards, which were placed vertically,” Chouin explained. “The rainy season is long and it’s very ingenious to have this system of pavement, which creates millions of small gutters, because the pottery creates little channels. Basically it was a way to evacuate water and to keep your feet dry.”

Some of the shard-paved courtyards remain, along with other remnants of ancient Ife. One of Chouin’s goals is to map and log these surviving features using GIS technology.

“You can go to Ile-Ife and see nothing, but I know what to look for,” Chouin said. “We will be looking at some of the surviving ditches around the medieval city. We are hoping to uncover in the ditches some material that has been deposited from the time of the construction up to the abandonment of the city.”

Ditches, wells and other diggings are interesting to archaeologists, he explained, because residents of towns invariably use them as dumps, and such diggings consequently become artifact magnets. A broken, discarded tool or other piece of rubbish from centuries past becomes a valued, important artifact to an archaeologist, once it has been recovered.

Sungbo’s Eredo offers a set of mysteries even deeper than those of Ile-Ife. Chouin said that the term describes an ancient and enormous set of earthworks in Ijebu, in southern Nigeria. The earthworks extend over 170 kilometers, encompassing about a thousand square kilometers — an area the size of metropolitan Dallas. Its history and even function have been a matter of speculation.

In fact, Chouin says, not much is known for sure about the earthworks. Such monuments exist in other places in tropical Africa; Chouin himself has investigated similar features in southern Ghana. The working presumption among scholars is that Sungbo’s Eredo dates to the 12th century.

“The Ijebu oral traditions are not very clear about the monument. Its functions and its history seem to have been forgotten,” he said. “Many sections of it are still considered as sacred grounds, but there is no very clear of sense of who, what, where, why, it was made in the oral traditions.”

Chouin will probe the mysteries of Sungbo’s Eredo, using camera-carrying quadcopters to examine stretches of the overgrown earthworks. In the weeks before he left Williamsburg, he had a number of flight-and-software training sessions with Sean Pada, a technology support engineer with William & Mary’s Office of Information Technology. Pada and Chouin put the quadcopters through their paces in sessions above the Sunken Garden and the Dillard Complex, switching software modes as required to get ready for GPS mapping and photography of Sungbo’s Eredo.

Chouin is returning to Ijebu with his own set of hypotheses. He says that this Nigerian version of the Great Wall of China is probably too big to be a strictly defensive feature.

“I always look at this enclosure as serving several functions,” he said. “It could have been a kind of a prestige monument that was built to show other people outside how powerful the people living inside were.”

The first step in cracking the mystery of Sungbo’s Eredo is getting a handle on the chronology. Chouin explained that while the Dallas-sized area inside the earthworks includes several settlements, they aren’t near the walls. As a consequence, he doesn’t expect the earthworks themselves to be artifact-rich.

“In ditches like Ile-Ife, because it’s within an urban settlement, you have some kind of cultural material that ends up in these ditches. They throw their garbage,” he said. “But when you are very far from settlements, you are left with a great big piece of sand and laterite. How do you date this?”

In an attempt to make sense of what is expected to be an artifact-poor site, Chouin’s team will include a geologist, who can evaluate eight centuries of change to the earthworks of Sungbo’s Eredo. The geologist, he explained, would study erosion of the features as well as interpreting anything that the archaeologists dig up.

“You go through it and you might discover some fragments of charcoal,” Chouin said, adding that the geologist will help to put such findings in context. “Is this actually part of a layer that was older and accidentally carried in to build this monument? Or does this charcoal actually date this monument?”

Chouin hopes his work in Nigeria this summer will help to advance his understanding of the process of urbanization of African areas. He also has a hypothesis about the Black Death’s role in what he calls “deurbanization” — the events that led to the depopulation of the area inside Sungbo’s Eredo, and perhaps Ife as well. Scholars working at sites across Africa are working to assemble pieces of similar deurbanization narratives, many of which date to the 14th century.

“We have colleagues working in Ethiopia, others in the Sahara,” he said. “I work in western Africa. Other people are looking also at east Africa. We know about it but the problem is to actually demonstrate it — prove it.”

Chouin points out that there is copious documentation about the bubonic plague’s effects throughout Europe, North Africa and around the Black Sea. Proving that the bubonic plague emptied one or more of the great urbanized areas of Africa requires a different sort of evidence.

“The problem in sub-Saharan Africa is that we have no written sources about the plague,” he said. “That’s 14th century. That’s a period in which there are limited written sources and they often have a religious function, rather than historical.”

When written sources are scarce, he said, “then we are left with archaeology, trying to get a better sense of it.”

Chouin said only a limited number of mass graves have been found so far. Modern test methods will allow Chouin and his colleagues to test human remains for remnants of the plague bacillus. Teeth of individuals dead for 800 years can still contain shreds of plague DNA.

“Basically, the tooth is connected to the bloodstream. And this disease circulates in the bloodstream,” he said. “When an individual dies, the tooth enamel forms a kind of a safe, and encloses this evidence in the pulp. We are able to open the safe and extract the DNA that is inside.”