Daniel Reichwein will graduate from William & Mary on Saturday with a degree in business. He will celebrate with a few relatives and close friends then join his fellow graduates in search of a job that offers the opportunity to build on his rigorous academic preparation.

It’s safe to say that’s where any similarity between Reichwein and the Class of 2015 stops.

"Once every few years, a student comes along who teaches me something about life and about myself that I never expected," said Drew Stelljes, assistant vice president for student engagement and leadership. "Daniel has been a student who has inspired me to try to be a better teacher and mentor … Wise beyond his years, William & Mary is a better place because of Daniel."

Another lifetime ago, Reichwein was the product of a drug-abusing mother and an unknown father — unknown, at least, until Reichwein searched his name on the Internet one night and found the obituary of a man in which he was listed as a surviving family member.

Another lifetime ago, he was a foster child in two homes that were anything but nurturing, where verbal and physical abuse were the order of many days.

Another lifetime ago, he was the recipient of a scholarship that entitled him to attend any university in Indiana free of charge. Interested in professions of idealistic prestige and success — investment banking and law — that now seem very hollow, he tried Indiana University on two separate occasions, dropping out both times.

Another lifetime ago, Reichwein spent a total of three years homeless, disenfranchised, living in shelters, on the streets and in tents. He was arrested and imprisoned four times. [He has no record, as all charges brought against him while he was homeless have been dropped or annulled.]

Another lifetime ago, Reichwein joined the Army Reserve, but stopped showing up for work. His unit sent the local police to his apartment, where he had sullenly wasted away for nine months, foregoing work and school while only leaving once every few weeks to buy food at the nearest convenience store and ignoring family and friends’ attempts to contact him.

The police took Reichwein to a local hospital where he was diagnosed with depression. Through several years of varying mental health treatments and diagnoses, it was later discovered that Reichwein had post-traumatic stress disorder and attachment disorder, which manifested as depressive symptoms. His mental health problems nearly resulted in his suicide and, he said, "ruined" much of his youth.

"I'm still embarrassed about some of the failures I’ve had," he said. "It was failure that drove me to this esteemed institution, where my life was changed from homelessness and failure to community and success."

He is open – and candid – about all aspects of his 32 years of life. No confidences have been violated in the telling of his story.

"She looked beyond the common perception of homeless people," he said. "The main thing she saw in me is that I didn’t belong there. She wanted to make sure I got where I was supposed to be."

That was Germanna Community College.

"One day we were working on a project for [Micah] and he pulled up a Power Point presentation that he had made at the library the night before, complete with blueprints," Holtzberg recalled. "His ability and drive to make something so well thought out and executed was so impressive that it prompted me to meet with him after the group and discuss what his future goals were. He told me he wanted to go back to school but was not sure how he was going to pay for it." 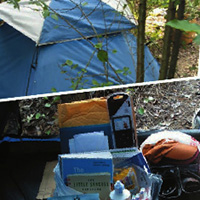 Holtzberg set up an appointment with Germanna’s financial aid and enrollment center then drove him over. In just a year, Reichwein wound up with a two-year associate’s degree and a 3.94 grade point average, despite working 32 hours a week and living part of the time in a tent.

Later in their relationship, in August 2011, she drove him to a job interview she had arranged with friends at a Fredericksburg animal hospital.

"I am not sure I would have made this call for any of my other clients at the time, but I was able to get to know Daniel and felt confident that he would exceed expectations," she said.

Veterinarian Kathy Kallay didn’t find out that Reichwein was homeless until months after he started working for her. Using public transportation, Reichwein often arrived near the hospital several hours before his shift and waited in an eatery.

"He definitely shattered any preconceived notions I had of what a homeless person was like," she said. "It was a joy to watch him go from being homeless, to having a place to live, enrolling in and graduating from community college, thriving at work, being able to purchase a car and finally enrolling at William & Mary.

"So many people who have much easier lives than him make excuses and find reasons to complain. Daniel never did."

The Kallays are attending the graduation of "one of the most impressive people I have ever known. We are so proud of what he has accomplished."

A co-worker at the hospital, Dawn Witter, brought Reichwein into her home when she found out he had nowhere else to go.

"Looking back on it, many people helped me along the path to graduation from William & Mary," Reichwein said. "It would have been much more difficult had it not been for Dawn's kindness."

His homeless experience, Holtzberg’s aid and a weekend in which he helped a fellow homeless man find a job that got him off the streets inspired Reichwein to look differently at life.

"I met veterans, teens that ran away from home. I met a lot of great people, older people, too, who just didn’t have enough money saved up for when some physical ailment hit them. They ended up in the hospital, couldn’t pay their bills and the next thing you know they’re in a shelter," he said. "I thought I had suffered growing up, but that really enabled me to see the suffering that other people had gone through.

"When I really grew up is when I stopped being so concerned about myself and developed a sense of empathy for the world and the people around me."

Since coming to William & Mary in January 2013, Reichwein worked in the Office of Community Engagement. He was selected as a fellow for the D.C. Summer Institute on Leadership and Community Engagement, where he worked in the D.C. Central Kitchen’s Culinary Job Training Program. It was a place that made him feel like he "belonged" and gave him the “family” he never had.

"He emerged as a trusted guide to the other fellows," Stelljes said, "sharing his wisdom while listening intently and expressing his care for their well-being."

Now it’s on to the next chapter. Like many others, Reichwein isn’t sure where that’s going to take him.

For nearly a year, he has worked fulltime for the local United Way’s Re-Entry for Felons program, where he mentors and supervises a small group of former felons who are on the path to reintegration.

"I would like to either protect people or empower them," he said. "Because of my experiences growing up with child abuse and those things, the idea of protecting people is very important to me at heart. I did not listen to that instinct in 2005 when I joined the Army Reserve … But now here I am 10 years later, and I want to pursue the same thing, national security-type jobs. If those don't work out, I’ll look to the non-profit avenue, where I have the chance to empower others."

‘A time of consequence:’ Rice, Gates reflect on public service

W&M students to be commissioned as Army officers