{{youtube:medium:center|OGNKPiUK0d8, Associate Professor Rich Lowry discusses his new book on Lincoln's legacy and the photos that helped create it}}

Having been alerted to the possibility of an assassination attempt, president-elect Abraham Lincoln snuck into Washington, D.C. on Feb. 23, 1861, and began preparing for an inauguration that was anything but certain to take place.

After several days filled with meeting the vice president, potential cabinet members and glad-handing supporters, Lincoln decided – inexplicably, William & Mary Associate Professor of English Richard Lowry would argue, given the perilous times – to have his photograph taken on a Sunday morning.

Lincoln walked into the gallery of the famous Matthew Brady and instead met Brady’s assistant, Alexander Gardner. Thus began a long, unique relationship that Lowry deftly explored in his new book, The Photographer and the President: Abraham Lincoln, Alexander Gardner, and the Images That Made a Presidency.

“Gardner took more photographs of Lincoln than anyone else, more than 38,” Lowry said. “Lincoln himself sat for about 130 photographs, which made him the most photographed man of his generation. Many of those Gardner took are the most iconic.”

It was one of those iconic photos – the “cracked plate portrait,” taken in 1865, little more than a month before the assassination – that moved Lowry to take on this project.

“Back then, negatives were glass,” Lowry said. “The plate had cracked after Gardner took the photograph and he managed to get just one photo before the glass fell apart. 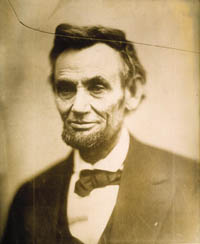 “A number of things are amazing about it. One is how big it is. It’s 20 inches tall by 12 or 13 inches wide. Two, the photo is mesmerizing, astounding, a very non-presidential photograph. There’s no president that would allow someone to take a picture of him looking that wan and worn out. Parts of the photograph are out of focus. It looks like he’s traveling past us.”

Lowry saw two dichotomies that helped him shape the story. The first was the persona of Lincoln as a humble man who often poked fun at himself and his ungainly looks.

The other was the style Gardner chose in his work. He liked to experiment with his craft, becoming more of a portraitist than journalist. But he also took photos following the battles of Antietam and Gettysburg that even today remain the most vivid reminders of the catastrophic loss of human life that occurred.

“Lincoln is sitting for all of these photographs,” Lowry said. “Why? What did expect to get out of them? And I became more interested in Gardner as a portraitist, a man who thought of more inventive ways to take photographs of [the people who sat for him.]

“Brady took the photo that appears on the $5 bill, but Gardner’s have emerged as more compelling, with more personality to them.” 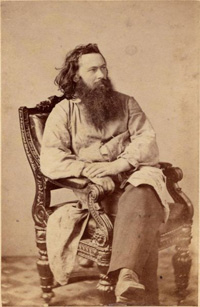 Gardner’s initial photo of Lincoln was influenced by a friend of his who painted portraits. Gardner asked him to help pose Lincoln; instead, the painter saw the president slouched over, staring aimlessly into space, and told Gardner to open the lens.

“Gardner learned something here,” Lowry said. “He saw the difference between what a painter sees and what a photographer sees.

“His next sitting with Lincoln, they did a little experimenting, moving Lincoln around. As they went through their relationship, he keep adjusting poses, just enough to explore what a camera can do with someone else. Lincoln, who was interested in photography and all things mechanical, became drawn to photography, how it worked. He liked to look at the pictures.” 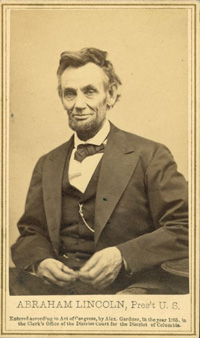 Lowry emphasized that Lincoln had no control over the photos, that there was no White House press staff scrutinizing them or preventing them from being disseminated. Yet those photos helped cement his place as one of the great leaders in American – and maybe world – history.

“For Lincoln, photographs humanized him, they made him look like one of us,” Lowry said. “They made him the face of the nation in a literal way. His face became what the nation wanted to be. The suffering people saw in his face was the expression of the suffering they’d all been going through. The photos represented the same relationship to [the people] he tried to establish in the Gettysburg Address.”

Gardner’s studio was on the top floor of his office. To get there, one had to pass through a gallery in which hung many photos of dead Yankee and Confederate soldiers. 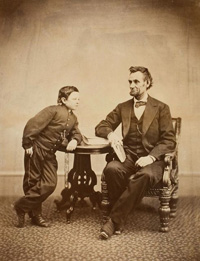 “Lincoln visited Gardner’s gallery twice during 1863, once in summer, once nine days before he went to Gettysburg,” Lowry said. “It’s inconceivable that he wouldn’t have seen those photos from battle, so there may have been something about walking through this room that would have chimed in with what he was trying to do with his Gettysburg Address.”

Gardner’s relationship to Lincoln ended not with the assassination, but with his photos of the execution of the men who helped murder the president.