Daniel Mendoza was the Muhammad Ali of the late 18th century, infinitely more than just the boxing champion of Great Britain. He was one of the sport’s pioneers.

Rather that just stand and slug it out with an opponent, Mendoza essentially invented the bob, the weave, the counter-punch and other essential maneuvers that best serve elite boxers of all levels even today. That alone might have been reason enough to resurrect the long-forgotten biography of a man who ruled his sport from 1789-95.

But William & Mary Associate Professor of History Ronald Schechter advances an already fascinating story by leaps and bounds in Mendoza The Jew: Boxing, Manliness and Nationalism.

Yes, Mendoza was a Jewish pugilist at a time when many Jews tried to use the sport as a way to escape poverty and prejudice. Although just 5-7, 150 pounds, he throttled many heavyweights in flamboyant fashion. Mendoza was so popular that he provided more open-minded segments of British society reason to consider their snobby, elitist attitudes towards minorities.

Because boxing was the sport of sports in Britain and because other countries – most notably France – preferred to settle insults and disputes with widow- and orphan-making duels, Mendoza’s exploits contributed to a growing nationalist feeling. Despite the brutality of the bare-knuckle matches that lasted hours, Brits came to think of themselves as more civilized than the rest of the world.

All of that, and more, come to life in the most unique manner in Schechter's book. Schechter teamed with graphic artist Liz Clarke – a South African that he never met – to create a “graphic history.”

“It looks like a comic book,” Schechter said, “and with Liz’s help, I was able to tell the story in graphic form.

“Sports fans will be interested in the book, but I wanted to take a historical case study and present it to students as a window into all these other aspects of history – Jewish history, British history, the history of gender, manliness and nationalism.”

Schechter fed Clarke massive amounts of material -- images from the 18th century so she would know what the main characters looked like, images of their clothing gleaned from museum websites, images of the architecture of 18th century London.

“We were very careful to get the details right,” Schechter said.

Following Clarke’s artistry, which occupies the first 75 or so pages, Schechter includes an extensive section of historical documents, the actual primary sources he and Clarke used in their interpretation of the Mendoza story. Among them are excerpts from Mendoza’s autobiography, entire newspaper accounts of his matches, even prints made from specific moments in his most notable bouts. 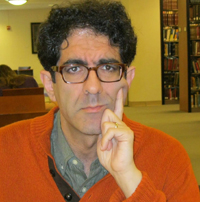 “That makes it possible for (the reader) to compare and get an understanding of how historians actually work,” Schechter explained.

The third and fourth parts of the book are essays penned by Schechter examining how he and Clarke turned their primary information sources into the final product.

Finally, Schechter suggests classroom projects or papers professors could assign their students that would involve them using the book as a research tool itself – “one-stop shopping for professors who want to introduce students to the historian’s craft,” he said.

Schechter does not claim to have invented this unique genre. Quite the opposite. Eighteen months before Mendoza was released, he assigned his class a book entitled Abina and the Important Men, also published by Oxford Press, in which Clarke and author Trevor Getz had collaborated.

“I had already done some research on Mendoza at that point, and already felt that it would be an interesting project to pursue,” he said. “I could picture Mendoza on the page, could picture the drawings by Liz Clarke, and I was lucky. An acquisitions editor at Oxford had already convinced (the company) that this was a worthwhile project.”

Schechter understands the obvious risks in presenting Mendoza’s story in the style he has chosen.

“There are going to be some professors who are going to think that this is ‘dumbing it down’ or that it’s making it too easy for students,” Schechter said.

Stuart Semmel of Yale University’s department of history, who calls the book “grippingly described and boldly illustrated,” doesn’t think so.

“Readers will be drawn in by the taut narrative, which is supported by thoughtful analysis of pugilism, the Jewish community, and national identity during the age of the French Revolution,” Semmel wrote. “The book's generous selection of primary sources lets readers investigate the materials with which Schechter has built his narrative.

“The accompanying essays (and suggested assignments) invite students to think critically about how historians build their historical accounts. Mendoza the Jew will be welcomed by students, professors and readers alike.”