As the country struggles to define what it means to be “American” in the face of increasingly thorny immigration issues, the history of a Chinatown halfway across the globe could hold clues to navigating competing identities.

Han’s inquiry began in 1996, when he arrived in Tokyo with a fresh degree in molecular biology and a plan to teach English.

“I made a day trip to Yokohama and I couldn't help but notice the Yokohama Chinatown,” he said. “This was a bustling, vibrant community, very different from New York's Chinatown. I wondered about the identities of these people. Could they be like Chinese-Americans? How did they reconcile their Chinese and Japanese identities? I presumed they would have some of these dilemmas, and I wondered if the way they would resolve those dilemmas would be similar to the way I understood my own.” 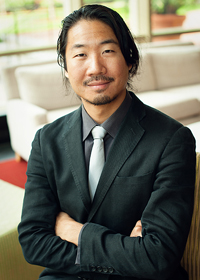 Han said he was fascinated with how Yokohama’s Chinese understood their relationship with Japan.

“I saw in this the possibility of some way to reconcile conflicts, this longstanding rivalry and conflict between China and Japan, because here clearly is a community of Chinese who have made peace with Japan,” he said.

He spent many afternoons with Yokohama’s elderly, combing through archives, brittle newspaper clippings and faded mimeographed newsletters. He also hung around the city’s library, poring over old local newspapers “that wouldn't be archived here in the United States and are of relatively marginal interest even in Japan.”

The line of inquiry ultimately led Han to drift away from the natural sciences into history, as he intermittently spent years in Japan working to resolve the intimate question about how this singular community understood itself.

“If you go through the day-by-day articles, you do start to get a sense of how the town was stitched together by groups of culturally and ethnically different people,” he said. “You do start to see incidents: brawls between Chinese and Japanese, divorces between Chinese and Japanese, descriptions of Chinese food written by Chinese cuisine aficionados in Japan. You start to see the texture of the daily life and the way that national categories don’t really capture the actual connections between people and the lives that were lived during that time.”

The Bao family’s remarkable history illustrates some of the tensions the Chinese community faced in Yokohama.

The patriarch, Bao Tang, moved from China to Yokohama in the 1870s or 1880s, marrying a Japanese woman and setting up a successful restaurant that introduced Cantonese cooking to Japan. The couple had a number of children who, because their father was Chinese, were themselves Chinese citizens.

But that citizenship was tested dramatically during World War II. Two of Bao Tang’s sons joined the Japanese army (as a medic and a translator, respectively), one of them dying in the fighting in China.

And a fourth son, Bao Bogong, remained in Yokohama to run the family restaurant, but was not unaffected. Japanese authorities compelled him to make statements legitimizing Japan’s war in China.

“The Bao family allows me to make two very interesting arguments,” Han said. “On one hand, I want to point to the dilemmas individuals face with these national categories. If your life happens to cross national boundaries and national identities, oftentimes you're asked to make these very difficult decisions. I think this problem has actually become more prevalent today, more than ever.”

The Bao family also illustrates how citizenship requirements based on bloodlines can lead to absurd results, he said. Bao Bogong was half Chinese, but was considered a Chinese citizen under Japan’s nationality law, as his sons would have been.

“This, if nothing more, should give readers the understanding of how artificial national identity really is,” Han said. “You can see that a national identity is more a matter of legal maneuvers and procedures than any actual heritage.”

Weighty stuff, but Han also deals a bit of humor with a light hand, as he includes as the lone appendix Bao Bogong’s recipe for “Bok Choy and Whole Braised Chicken.” 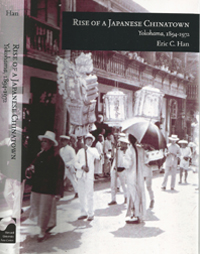 “I spent quite a bit of time discussing the rise of Chinese cuisine in Japan and how those developments influenced the way Japanese people viewed the Chinese,” he explained. “I thought it would be of academic interest – or perhaps culinary interest – to include one of his recipes. And the recipe itself is fascinating. It's extraordinarily labor-intensive and probably typical for recipes from that time period … This was not a recipe designed for the convenience of busy city dwellers.”

Han refers specifically to step three: “Carefully remove the bones from the chicken, retaining the shape of the chicken as much as possible.”

‘Together, with a difference’

Like the Bao family, many of Yokohama’s Chinese tried to sidestep airtight national identities during peace and war both by developing a local identity as “hamakko,” or Yokohama-ite, which allowed them with varying degrees of success to freely form ties with their host country while not denying their “Chinese-ness.”

“Most of these people have come to an understanding of themselves not just as nationals, as Chinese and Japanese, but also as local residents,” he said. “They are able to build an identification with their local community, which then allows them to build solidarities between themselves and people of other nationalities.”

The idea of a Yokohama-specific identity also enabled Japan to tolerate the growth of the Chinese community without seeing it as a threat to its narrative of a homogenous culture.

Han notes a Japanese saying that illustrates this as it pokes at the difference in what it means to be “native” to Tokyo (edokko) versus Yokohama (hamakko): “It takes three generations to be an edokko, three days to be a hamakko.”

“[My study] is looking very seriously at the way that a migrant group can become integrated into a society which does not have the policies, nor the public expectation, that they can naturalize,” Han said. “So this is a story about integration into a non-immigrant-receiving country, and I find that to be fascinating.

“They have created their own space there, but they've largely dodged the question of assimilation into the wider collective. They are together, but with a difference,” he continued. “This is something I think scholars are starting to accept and propagate now, that we don’t have to merge with the collective to be a member of a society.”

"Our lived local communities are authentic identities,” Han said. “We should not be focused entirely on our origins, on our citizenship. The lived local community can be also the object, the locus, of our identities. This is in some senses cosmopolitan and democratic, because these are communities in which all of us – regardless of legal status, regardless of citizenship – are already implicated and are already participating.

“I do believe the type of solidarity that can arise from that can be a useful counterbalance to a lot of the national stereotypes and national conflicts that seem to be so difficult to resolve around the world."