For Matthew Lambert, an opportunistic quest for free pizza in the 1990s culminated last autumn in the publication of his book Privatization and the Public Good: Public Universities in the Balance (Harvard Education Press, 2014).

While an undergrad at William & Mary during those post-recession years, Lambert ‘99, now vice president of University Advancement, was lured by the promise of pizza to the Sadler Center to write letters to legislators supporting higher education funding.

University leaders were on record decrying the drops in funding, but legislators remained silent. Lambert wondered: Did they agree that universities were in crisis? Did they recognize that higher education’s larger public purposes were threatened?

He decided to find out.

More than a decade later he had interviewed almost 150 current and former state legislators, governors, members of Congress and policy-makers, picking their brains on what they know of public higher education and how they feel about it.

“Though I did not endeavor to conduct an anthropological study, at times I fancied myself a sort of Jane Goodall, observing these public officials in their natural habit,” Lambert writes.
Meanwhile, the trend of decreasing public appropriations for higher education continued to intensify. University of Virginia – one of the flagship universities that, along with University of North Carolina-Chapel Hill and University of California, Berkeley, formed the basis of Lambert’s inquiry – saw its state funding drop to less than 6 percent.

William & Mary was not one of the universities Lambert studied for the book, but during the same time, state support that once topped 40 percent of its operating budget dipped to the current 12 percent. 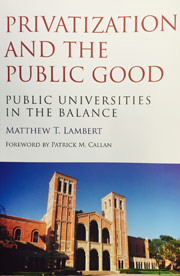 “Rising enrollment and tuition, increasing costs and services and decreasing state funding have led to a crossroads where higher education is being challenged and stretched today, and many are questioning it as a public good,” Lambert writes.

Instead of just surveying politicians and focusing on the finances, Lambert went further, examining the context of public higher education in the three states and the changes and tensions in universities’ relationships with legislatures.

He found that really no university is purely private nor public. Private institutions rely on the federal government for research funding and financial aid, while public schools increasingly rely on philanthropy, tuition and private revenue streams. Each university exists somewhere on a public-private continuum.

Yet the word itself, “privatization,” remains a dirty one politically. One California state senator told Lambert flatly, “The public universities in this state will never, ever be private. Privatization is not part of our vocabulary. Got it?”

Lambert found that, for myriad reasons, legislators on the whole know little about the state of public higher education. Even fewer are advocates.

In an era of diminishing state resources and competing needs, legislators have developed a budgetary pattern of dealing with public universities, Lambert said. “Funding will be cut, universities will raise tuition, legislators will decry how awful this is, how horrible, but there’s also a wink and a nod because they know that this is what institutions have to do.”

In communication, “universities are from Mars, politicians are from Venus,” Lambert writes. Leaders from each camp reflect different values and speak different languages. Legislators are “weary,” while university leaders “appeared to be ready to give up on future state funding rather than continue to make the case for steady or even increased funding.”

The time is now for a “renewed conversation,” Lambert said. Even with less revenue coming from the state, public universities need not ever “go private” in the sense the state senator from California feared.

“When managed with an eye toward clarifying public policy objectives and creating clear expectations for what constitutes an institution’s responsibility for the public good…privatization need not represent a departure from public mission,” Lambert writes.

Or, as UVA President Teresa Sullivan told him, “What makes this institution public is public mission. It is in our DNA.”
Both sides can benefit from understanding the priorities of the other, he said. Public universities generally want greater autonomy over enrollment, flexibility in tuition and freedom to compete in the marketplace.

Lambert believes university leaders need to better communicate the value of public higher education to society as a whole, and to the state in particular.

“College and university leaders may have to bridge the gap, finding new ways to connect with and assist legislators in meeting state goals and priorities,” he says.
The book has not fallen on deaf ears. The policy community is beginning to notice it and faculty is beginning to use it in classes. Inside Higher Ed featured Lambert and the book in December and he’s currently working on an article for higher learning magazine Change.

“Privatization has been knocking at the door for more than two decades and is here to stay,” Lambert writes, “but we must approach and conceive of higher education as a public good and seek to maintain its roles in society as such.

“Democracy depends upon it.”