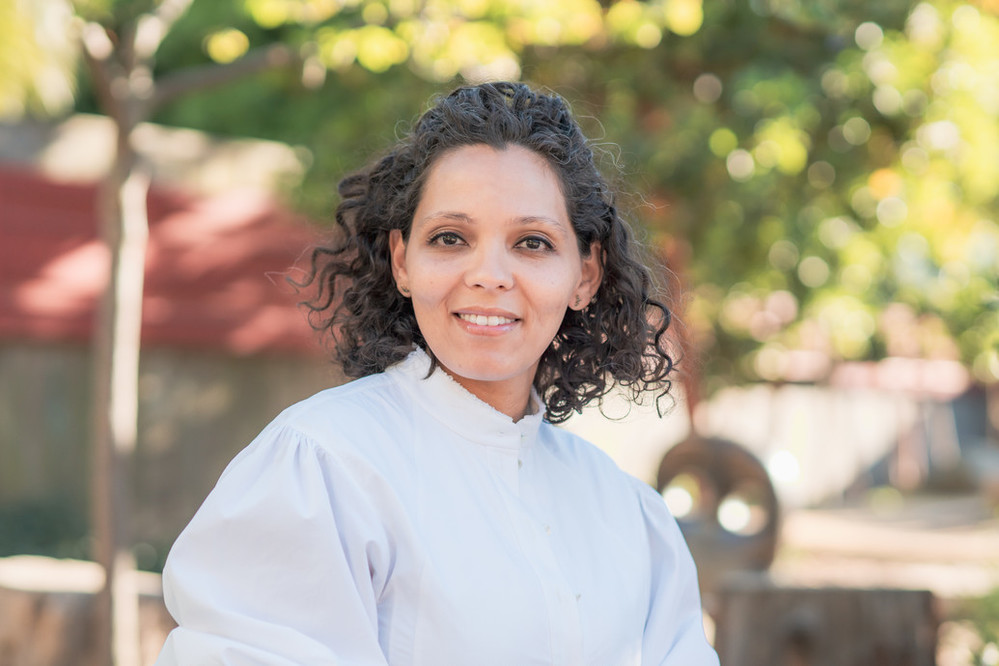 Evolution usually takes its time but, occasionally, sweeping changes can occur in just one generation. Instead of evolving the slow way—with genes gradually mutating until the organism is most fit to survive—nature may opt for a short-cut known as non-genetic inheritance. In this process, parents pass biochemical baggage onto their children in the form of motley RNA molecules and methyl groups, which switch genes on or off without altering the contents of the genetic code itself.

Non-genetic changes may take effect immediately and are sometimes inherited by every subsequent generation. The result is evolution in moments instead of millennia.

Lamia Wahba, the newest addition to The Rockefeller University faculty, discovered a key mechanism of non-genetic inheritance in the nematode C. elegans, and has since launched a deeper investigation into the mysteries of non-genetic inheritance. Wahba will join Rockefeller January 1, 2023, as a tenure-track assistant professor and head of laboratory.

Genetic inheritance is usually a cookbook biochemical process. Double-stranded DNA is transcribed into single-stranded RNA, which leaves the cell nucleus and later gives rise to protein. As a Ph.D. student, Wahba studied what happens when this process goes awry, specifically when DNA and RNA become tangled into three-stranded conglomerates. These RNA:DNA hybrids form in the nucleus when RNA doubles back, binding the DNA from whence it came instead of leaving the nucleus. Wahba’s research clarified how these hybrids contribute to genome instability and showed that their formation depends on a gene called RAD51.

Wahba believed these findings might be of practical significance because CRISPR, a widely-used gene editing tool, involves RNA forming a three-stranded hybrid with DNA. “We figured that overexpressing RAD51 could increase the efficiency of CRISPR,” she says. Indeed, Wahba’s work led to a patent for a new technique that could make CRISPR run more smoothly.

When she later began her postdoc in Andrew Fire’s laboratory at Stanford University, Wahba intended to shift focus and study the mechanisms that cells use to defend themselves from the ill effects of transposons, DNA sequences capable of changing position in the genome and causing both deleterious and beneficial mutations. Fire suggested she focus on piRNA, a class of small RNA molecules that were thought to keep transposons in check.

Supporting this theory was the fact that, without piRNA, mice are born sterile and fruit flies develop defective gonads. Researchers assumed that reproductive cells were left vulnerable to mounting mutations when piRNA wasn’t there to wrangle rogue transposons. The impacts of piRNA loss in C. elegans roundworms, however, had left scientists scratching their heads. Unlike mice and flies, piRNA-deficient worms keep reproducing for ten generations before sterility finally takes hold. Wahba began her research by investigating this roundworm riddle.

But she couldn’t find any of the proposed mutations that would explain why nematodes took longer to feel the absence of piRNA. “There was nothing wrong with the DNA of the organism,” she says. “Instead, we saw a gradual accumulation of another class of small RNA molecules.”

Wahba soon realized that these small RNAs were stepping in to fill the piRNA void and, along the way, silencing genes responsible for producing ribosomal RNA until the sperm cells were unable to do their job. “Every generation gets a little less ribosomal RNA, until you reach a breaking point where you can no longer maintain normal function of the germ line,” she says.

Although this solved a long-standing mystery about nematode reproduction, it also revealed a heretofore unknown example of non-genetic inheritance. Nematodes were passing along a sterilizing defect, not by genetic mutation but by small RNAs silencing specific genes.

“We already know that not every cancer can be explained within the context of changes to genetic information, nor can every process in which bacteria acquire resistance to antibiotics,” Wahba says. Many diseases may in fact stem not from non-genetic factors that influence gene expression. “Understanding the contribution of non-genetic inheritance to evolution could help us understand similar types of evolution when they crop up in disease and drug resistance.”

Rick Lifton, the university’s president, notes that the faculty search committee was unanimous in their enthusiasm for the creativity, originality, and execution of Wahba’s research. “Lamia will be an outstanding addition to our faculty,” he says. “Her work reveals a surprisingly chaotic germ cell in which siRNAs directed against essential host RNAs are kept in check by another layer of RNA-targeted degradation. It provides opportunities to understand non-traditional modes of inheritance as well as avenues for greater understanding of the function of piRNAs.”

Wahba grew up in Egypt and Saudi Arabia surrounded by science—both of her parents are doctors—but did not become interested in pursuing a career in research until she was introduced to the discipline in a freshman course at the College of William and Mary. Wahba also picked up rowing in college, a hobby that she still enjoys. She went on to earn her Ph.D. from Johns Hopkins University and completed her postdoctoral training at Stanford University.