‘This was really a different approach’

Comments began rolling in even before the first listening session was held in support of President Katherine A. Rowe’s strategic listening initiative, in September.

With a fresh website, “Thinking Forward,”  devoted to gathering the opinions of the William & Mary community on the university’s role in the future of knowledge, future of work and future of service, the university received a steady stream of online comments from the first announcement of the initiative.

“One of the pieces that surprised people was that overall, this was a really different approach to even listening sessions than we’ve done in the past,” said Jeremy Martin Ph.D. ’12, M.B.A. ’17, associate provost and assistant to the president, who devised the president’s office strategy for organizing the comments once they were received and presenting them to Rowe for consideration. As of the beginning of December, the university had gathered more than 700 data points from community participation.

The first listening session, devoted to the future of knowledge, started in a traditional way, Martin explained, in that it featured a set-up of two microphones and an invitation to the participants to stand and deliver comments in response to prompts.

But everyone in attendance was also invited by the moderators to write down their ideas on notecards furnished at the session, which were then turned over to the Brafferton. This ensured that people who weren’t necessarily comfortable standing at a microphone still had an opportunity to further the conversation, Martin said. 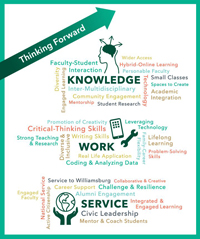 Behind all that data was Martin; Johann Ducharme, a doctoral intern in the Brafferton, and Elizabeth DeBusk-Maslanka ’13, executive communications associate.

For Ducharme, the session feedback provided an opportunity to work with the qualitative research practices he had learned in the School of Education’s Policy, Planning & Leadership program. He began typing up all of the comments – around 150 from that first session – adding them to the online comments and starting to synthesize the comments for common themes.

The next town hall, devoted to the future of work, generated twice again the number of comments as the first, and the process repeated with the future of service. Rowe attended and participated in all three sessions, while Ducharme worked behind the scenes with the data, looking for commonalities.

Still, most of the opinions coming in were from faculty, staff and some alumni, Ducharme said. The push to gather opinion on social media, through Twitter chats and Instagram stories in particular, really added a diversity of viewpoints, including far more current and prospective students and alumni, but also friends of the university, Ducharme said, such as parents and residents of greater Williamsburg. That presented new perspectives that hadn’t yet been expressed and he retooled and expanded the themes again.

As much as the president’s office was pleased with the quantity of comments, administrators were also focused on the quality of the ideas. Rowe especially wanted a chance to examine divergent viewpoints, Ducharme said, including those that clearly have value but don’t necessarily line up with a particular emerging consensus. 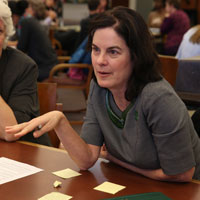 The team then began considering how to package the information for presentation back to the community, especially the three key themes that cut across the categories of knowledge, work and service.

Three overarching ideas evolved during the listening process: deep human connection is a hallmark of William & Mary; the intersection of diverse modes has increasing value in the fields of knowledge, skills in work and integration of service; and sophistication in bridging difference, cultivated in an inclusive community, enriches our lives.

Regarding the Future of Work, the W&M community identified value in preparing for complexity, learning over a lifetime, bridging differences in a sophisticated way, communicating exceptionally well across mediums and developing the ability to analyze data.

Considering the Future of Service, participants recommended acknowledging a shared aspiration to change the world for the better, engaging stakeholders and growing partnerships inside and outside W&M, integrating learning through service and cultivating resilience.

“In our conversations – formal and informal – you have shared your personal values, experiences and hopes for William & Mary, allowing me to get to know our community in a way that is both broad and deep,” Rowe said. “I listened closely to our community – undergraduate and graduate students, faculty, staff, alumni and friends.”

One of the main values for Rowe in the strategic listening initiative is providing transparency to the William & Mary community and to those who participate – explaining how their opinions are being considered and “playing back” the common and divergent themes to the community for verification and refinement.

At the end of November, the first playback session was held on campus, attracting more than 200 people, who worked to affirm the 14 themes, identify what is still missing and provide greater insights. This process of community reflection and refinement is expected to continue until Rowe’s inauguration, Martin said, and the initiative is expected to expand into a more formalized planning phase by the end of the academic year.