“We shape the nation, we shape the world,” Rowe said Tuesday at the Integrated Science Center, opening the first of several planned conversations on the topic of “The Future of Knowledge.”

The event was part of an ongoing effort by the new president to gather feedback from the William & Mary community around three themes: the future of knowledge, the future of work and the future of service. The “Thinking Forward” listening initiative includes both in-person and online events, including a series of questions posed via an Instagram story on Wednesday that has already garnered nearly 80 responses. On Oct. 8, starting at 6 p.m., the conversation will continue with a @williamandmary Twitter chat. Additional events may be found online, and future campus conversations will focus on the other two themes. 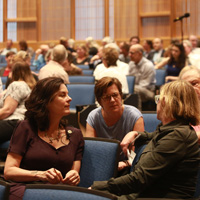 Speaking to more than 100 faculty, staff, students and alumni who gathered at the ISC Tuesday, Rowe said the university is now enrolling a generation of undergraduate and graduate students who are “strongly oriented outward.” It is W&M’s task to prepare them to do something with that commitment, she said.

But how? What has to happen the next 10 to 20 years for that to be achieved? The audience was asked first to reflect on a meaningful teaching or learning experience they have had at W&M.

Moderated by Vivian Hamilton, professor of law, and Dan Cristol, chancellor professor of biology and director of undergraduate research, the overriding sentiment during the forum was that while the university wants to embrace today’s amazing technological advances, immediacy and intimacy are at the heart of the W&M education.

Chuck Bailey '89 of Geology pulled a rock out of his knapsack, a souvenir from a voluntary weekend trip to West Virginia with students and faculty. There, a discussion ensued about of the rock’s potential importance, what it could teach them about the past.

“It became the touchstone — literally and figuratively — for what could become 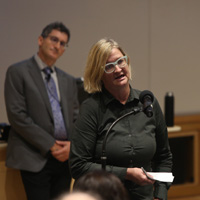 a senior research project,” he said. “That’s the kind of thing that’s happened over and over in my time here. A lot of that is the doing, and doing it with students outside of the classroom.”

For Liz Losh, it was watching Ph.D. students in her American studies class create old-fashioned board games — paper and cardboard — and thinking through ways to evaluate the work they had done, evaluating their audience and “what it means to create an artifact meant to be used by someone else.”

For Professor of English and American studies Bob Skolnik, “the best knowledge comes from engaging serious problems that are applied and practical and being able to develop solutions, especially through teams.”

He urged collaboration, taking advantage of facilities such as NASA Langley and the Jefferson Lab and executing a transformation to embrace the practical, “and really make a difference that way.” 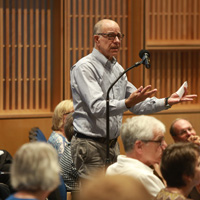 “He knew who I was,” Beringer said. “There was an intimacy of interaction. If we all have online classes and huge classes taught by graduate students, we don’t have that immediacy, that personal relationship with a professor that is so much more impactful on the student.”

True, said Kurt Carlson who came to W&M a year ago to be associate dean for faculty and academic affairs at the Raymond A. Mason School of Business. As an undergraduate senior, he tutored a failing fellow student in econometrics, gradually helping him lift his grade from an F to an A-minus.

“It was a victory for me because the whole way I could see the influence I was having,” he said. “The shame is we can’t do that with every single student.

“I was skeptical about online teaching when I came here, but there are some real advantages to it. You can reach a broad range of people, can track whether or not they’re engaged. There are platforms that allow that. It’s a little impersonal, but maybe I’ll have more effect if I reach 200 people. It’s a tough question.”

The second part of the conversation centered on what steps the university takes in the next two decades and what is changing in the audience’s respective fields of academic interest.

The simple answer, expressed by Arthur Knight, associate chair and professor of English and American studies, was “everything.” 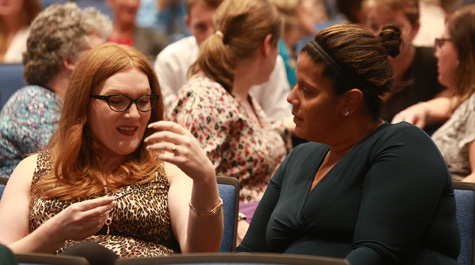 or of Hispanic studies, it’s the lessons he learns from his students, which he said he relished but made him feel “deeply vulnerable.” He cited two examples but said there were many more.

“There is a shift in that faculty members, professors, are not seen — nor do I think we want to be seen — as the sort of experts on the mountain, proclaiming our total understanding of everything,” he said. “I think we’re much more open to the classroom as a communal space, and that space brings with it certain risks and deep vulnerabilities.”

Physics Professor Bill Cooke '72 said when he was in college, students not only had to learn material, they had to remember it. Now, students need only use their devices to look up something. Teaching in such a way that they remember the information without relying on technology is the challenge.

Roxie Patton, associate director of the Center for Student Diversity, sees a “rapid change” in the demographic of W&M students, the number coming with mental health issues, the number coming from different racial and ethnic backgrounds and gender identities. They’re seeking ways to express themselves, she said, and the university must be open to that “vulnerability.”

“We have to get used to the change,” she said. “We’re looking at the opportunity for a cultural revolution here that we haven’t seen since the 1960s.”