William & Mary Professor George Greenia has been awarded the Judith Krug Medal in recognition of extraordinary service to the Phi Beta Kappa Society as a national organization.

“George has a deep well of wisdom and of humane feeling, blended with a personal style of great warmth and transparent sincerity,” said PBK President Kate Soule, presenting the honor to the Hispanic studies professor earlier this month at the National PBK Triennial in Denver. “Two of the stars on the Phi Beta Kappa key stand for literature and morality. The third is for George – friendship.”

Greenia was elected to the PBK’s national executive committee in 2009 after more than 30 years’ involvement with William & Mary’s Alpha Chapter, the “mother chapter.” He was originally inducted into the Zeta Chapter of Wisconsin at Marquette.

“We are extremely proud to count George Greenia as a member of Alpha Chapter,” said Matthew Allar, Alpha Chapter vice president and Class of 1955 Associate Professor of Theatre. “His resume of contributions to Phi Beta Kappa at William & Mary and to the national organization is exemplary, and a model to which we all can aspire. We are thrilled that George’s magnanimous service to the society has been recognized by this prestigious award.”

It was as an ambassador for PBK among its 286 chapters, plus universities applying for charters, that Greenia really shone. As he’s traveled personally and professionally over the past six years, he’s made it a point to visit “daughter” chapters to help them with best practices, raising their profiles on campus, recrafting their ceremonies and coaching them on screening student applicants.

“There are a lot of small chapters where there are few members and they’re working hard to keep their chapter going,” Greenia said. “The work always falls on just a few faculty members, as everywhere. They deserve some validation, celebration, support and acknowledgment. If somebody shows up from the national office and Alpha Chapter, it’s a big deal for them. I’m introduced to the dean and the provost and the president, and we have receptions.

Jewel in the crown

PBK was founded by undergraduate students at William & Mary in 1776 as the first academic honor society in the country.

“We have the original minutes that are held in Special Collections in Swem Library,” Greenia said. “They went down to the Raleigh Tavern, to the Apollo Room … I think we still have the bar tab, too.”

Because PBK is more than 200 years old here, it’s easy to lose sight of how significant it is for a university to gain a charter, Greenia said. The process is much more rigorous nowadays than heading to the local colonial tavern.

“We’re sort of the final accreditation that any university can gain,” Greenia said. “For the liberal arts and sciences, this is the jewel in the crown.”

The University of Oklahoma-Stillwater, for example, worked 33 years to secure the charter it was granted in 2012.

“It was lovely to go to Stillwater, Oklahoma, into this big, fancy auditorium, and see an image of the Wren Building projected on the auditorium screen hearkening back to the foundation of Phi Beta Kappa,” Greenia said.

“The presence of Alpha Chapter is always recognized by other chapters with near reverence, frankly. You show up on campus, and if I’m representing the Alpha Chapter, people start to get up from where they are sitting …”

The power to affirm

Greenia himself is near reverent in his enthusiasm for PBK, making it easy to see why the national organization recognized him as an “ambassador extraordinaire.”

At the same triennial conference in which he was awarded, he gave a talk on raising chapter profiles on campus, comparing PBK chapters to young superheroes who aren’t yet familiar with their superpowers.

“Your superpower is the power to affirm,” he recalled. “That’s PBK’s character and charisma. We can recognize and affirm accomplishment in the liberal arts and sciences – those who are doing it well, with faithfulness, dedication, understanding, wisdom, guiding a future generation. That’s our superpower. We can make people, in a world that doesn’t usually acknowledge this sort of thing, feel good about being really dedicated to the liberal arts and sciences.” 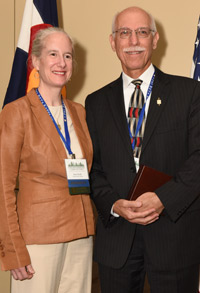 The Judith Krug Medal was created in 2009 to be presented to the recipient of the Phi Beta Kappa President’s Award. The award is given only periodically “in recognition of truly outstanding and extraordinary service to Phi Beta Kappa as a national organization,” according to PBK’s website. Greenia is the second person to whom it’s been awarded. The first time it was awarded was in 2012, and this year, PBK bestowed two of them: one to Greenia and one to another member.

“These are people I’ve worked closely with for six years,” Greenia said. “When people know you, but still like you? Oh, my God, who knew? It was lovely.”

In addition to the PBK award, Greenia received another accolade in October. W&M’s Institute for Pilgrimage Studies decided to name a new faculty research award in his honor.

Formerly a Franciscan brother, Greenia has worked at the William and Mary for 34 years and specializes in the Spanish Middle Ages. He was the founding director of W&M’s Medieval and Renaissance Studies program, and for years has spent summers guiding students along the Camino de Santiago in northern Spain.

Greenia is editor-at-large of the journal La corónica, which is devoted to medieval Iberia, as well as editor of the journal American Pilgrim and author of the textbook Generaciones: Composición y conversación en español. He also co-edited an encyclopedia of Castilian writers.

Greenia was honored with the Distinguished Editor Award by the Council of Editors of Learned Journals in 2007. That same year, he received the Cross of the Order of Elizabeth the Catholic by order of King of Spain Juan Carlos I for his interpretation and promotion of Spanish culture.