With two prestigious, competitive grants in hand, Associate Professor of Hispanic Studies Regina Root is continuing her research on what is known as the “Tillett Tapestry,” an embroidery chronicling the conquest of the Aztecs.

Root has been awarded $50,400 by the National Endowment for the Humanities and another $15,000 from the Center for Craft, Creativity and Design to continue the project.

With the funds, Root will study and photograph the tapestry, a 104-foot-long embroidery depicting the Spanish conquest of the Aztecs from the points of view of both the victors and the vanquished. The tapestry features 231 scenes, including almost 1,500 human figures, using more than 55 million stitches.

“When I received a call from Sen. Mark Warner’s office, I was so excited to learn that my project, ‘The Tillett Tapestry and Post-Revolutionary Mexico,’ had been chosen for funding by the National Endowment for the Humanities,” Root said. “What a tremendously thoughtful and meaningful gesture that was for this humanities scholar!”

Root, an expert in the material and environmental culture of the Americas, was intrigued when in 2011 the Cooper Hewitt Smithsonian Design Museum in New York called to ask if she’d be interested in researching the tapestry.

Cooper Hewitt’s Associate Textiles Curator Susan Brown said that shortly after she saw the Tillett Tapestry for the first time, she met Root. 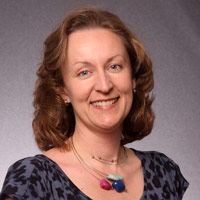 “I knew she was the perfect person to interpret this remarkable object,” she said. “The tapestry tells a complex tale of creative exchange in post-revolutionary Mexico, encompassing design practice, political history and the creation of cultural narratives – precisely the territory where Regina’s research interests and expertise lie.

“I think the tapestry is a forgotten American treasure, so I was so happy to introduce it to someone I believe will tell its story in a deeply intelligent and compelling way.”

The tapestry is actually an embroidery, a classification that reveals part of its uniqueness: The embroidery represents a chronology of the conquest of Mexico in a linear sequence, much like the 11th-century Bayeux tapestry (also an embroidery) depicts England’s conquest by the Normans.

The genesis for the tapestry stemmed from conversations between Leslie Tillett and Mexican muralist Diego Rivera. In the mid-1960s, Leslie Tillett started the hundreds of drawings and lithographs that formed the basis of the embroidery’s sweeping chronology.The work of art is the masterpiece of renowned textile designer Leslie Tillett. Born in England in 1915, Leslie Tillett arrived in Mexico with his brother James in 1940, planning to work with Spanish Civil War refugees. Shifts in the Mexican cultural realm meant that the Tilletts joined a thriving artistic community.

Over the next 12 years, Leslie Tillett, then living in New York, carried the tapestry across the U.S.-Mexican border to collaborate with embroiderers who hand-stitched the detailed scenes. He engaged hundreds of artisans and seamstresses in Mexico, Haiti and Queens, New York, before finishing the tapestry in 1977.

“Leslie Tillett referred to his embroidery as ‘El Tapiz’ – The Tapestry,” Root said. “He researched its many details with precision and impeccable care. Over decades, he documented in stitches what was to become a work representing the conquest of Mexico from all viewpoints, both indigenous and Spanish.

“El Tapiz offers us a unique opportunity to wrestle with what it means to be conquered or the conqueror and to understand the terms of cultural heritage and historic memory."

Root’s book will contain detailed, large-scale photography and the first scholarly treatment of the tapestry and its history. She hopes a traveling exhibit follows in 2019, 500 years after the conquest. 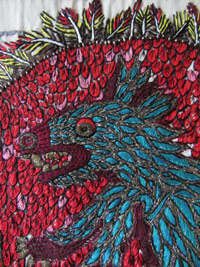 “Reading Root’s work has given me an academic appreciation for the study of fashion as a durable record of human activity,” said Dennis Manos, William & Mary vice provost for research and graduate professional studies, “starting with weaving and tanning as primary tools to satisfy basic human needs; through coloring, decoration and arrangement as artistic expressions of subliminal drives; and most importantly, to seeing customs of dress as powerful mirrors containing nonverbal statements of the political, religious and cultural content of societies.

“But really, I love reading Professor Root’s work for the fun of being surprised by her connections and insights. I expect her very deep-dive on the Tillett Tapestry will be the best yet. I can’t wait to see it.”

Root’s project will involve archival research and interviews to explain the tapestry’s significance. The Craft Research Fund Project Grant is helping with the photography and travel to archives, while the NEH grant will allow Root to examine and write about artifacts and materials that help translate its meaning.

“A lot of detective work goes into the projects I choose,” she explained. “Worthwhile scholarship is not instantaneous. Archival research can be tedious, although there are wonderful moments when one exclaims, ‘Eureka!’ Especially when finding an amazing piece of information sure to unlock the next piece of the puzzle.”

She hopes to involve students when she gets a little further along in her research and expects that it will inform some of her classes in the future.

“There will be the opportunity for undergraduate and graduate students to get involved,” she said. “That would be a wonderful thing. I can see using this work of art as a jump-off point to read the texts that influenced post-revolutionary culture quite profoundly.”