While the rest of William & Mary was wrapping up winter break in January with family and friends, two professors and nine undergraduate students were immersed in the hard work of immigration field research at the United States-Mexico border. And throughout the spring semester, they sought to turn that research into projects that would bring the lessons of the border back to Williamsburg.

The group spent a week in Tucson, Arizona, visiting the border town of Douglas, Arizona, and crossing into Agua Prieta on the Mexico side in the biennial border trip led this year by Associate Anthropology Professor Bill Fisher and Associate Hispanic Studies Professor Jonathan Arries.

“It was much more multi-faceted than what I had read about and heard about in the news,” said Quinn Monette ’17. “The common representation of this process is a group of people – typically darker-skinned Mexican men – hopping from one side of the fence to the other. And that’s not at all what’s going on. I was surprised by the diversity of experiences; this wasn’t a single, homogenous group. This was people from Guatemala, from Mexico, from all of Central America – men, women and children who all had their own valid reasons for trying to come to the United States and who all had stories to tell us. There are complex, deep-seated reasons immigration happens.”

The students met and worked with a dizzying number of churches, nonprofits, humanitarian organizations, agencies and individuals on both sides of the border, including Department of Homeland Security and Immigration & Customs Enforcement, the Sierra Club, immigration lawyers, public defenders and medical care providers.

And they met people toiling endlessly to prevent the hundreds of annual deaths of migrants in the Sonoran Desert – sometimes by doing nothing more difficult than providing fresh water – including well-off Tucson retirees (Tucson Samaritans) and members of the Tohono O’odham Nation. They walked miles on the migrant trail, in sagebrush tragically close to suburban American backyards, and visited memorials to the anonymous migrants who had lost their lives trying to cross.

Teaching on the border is “really a high-wire act,” Fisher said. “No one can control what students will learn or the conclusions they will draw about their experience.” 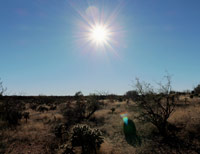 “This was not a relaxing end to the winter break,” said Joanna Hernandez ’16 with considerable understatement. She went to the border expecting that it would be clear who was doing good work and who was part of the problem. Instead, she found well-meaning organizations that had problematic aspects and Border Patrol agents that were sympathetic. “It’s a lot easier to picture people in those realms as surreal and just really not human, not relatable.”

At one point, seeing two graves of unknown migrants, one a teenage male, she said she had to step away. Her grief was compounded by her relationship with Mexico – her father is Mexican and she spent much of her childhood there.

“If my parents thought we could not survive if we stayed in our home countries, in a heartbeat – law be damned – we would have crossed,” she said. “I know my life is worth that to my parents. By whatever movement of the universe, that’s not me, but it could have been. And no one can offer a solution. No one can say, ‘Do this and immigration is solved.’”

‘We were there to sort out all the different strands’

The students were not set adrift to sort these encounters out alone. They were prepped for the trip with a week-long course that involved readings, exercises and discussions to introduce them to the borderlands and to the geopolitical circumstances that gave rise to it.

“There are two components when I think about the term ‘borderlands,’” Arries said. “There’s of course the physical border, but also there’s a psychological and cultural construct. The borderlands isn’t just Arizona, Texas, New Mexico, California. The border extends all the way to Williamsburg, Virginia, because there are people from the border here now.”

The goal of the class is in its title, Field Research in the Borderlands. “We were really interested in making this a research course,” Arries said. “This isn’t just a class, or a field trip. The idea is to train students in field research.”

To that end, Mary Ellen Garrett ’17 documented the entire trip through photographs and video.

“Looking through the lens while I was there, I started to see how powerful this story was and how little I knew about it,” she said. “It became real to me … when I saw how top-down border policy affects people every day. I’m from D.C. originally, so I’m very used to the idea of distant policymaking, creating policy that happens far away from you, and that didn’t seem very problematic to me. But I saw that what seems obvious on a policy level is farcical once you get on the ground. It doesn’t make sense.”

At their international host center, BorderLinks, in Tucson, the students and professors would talk in nightly reflection meetings about what they had experienced throughout the day and relate it back to field research and their respective disciplines.

“The objective is to engage intellectually with whatever was uncomfortable during that day’s encounters,” Arries said. “Students refer to their field notes to share comments and reactions, but the co-directors also ask questions that enable the students to move beyond a simple debriefing and to link what they saw and felt to systematic explanations that lead to deep learning.”

Garrett said that Fisher especially pressed students to think not only about what they saw, but also the conditions they weren’t seeing that contributed to the situation, be they related to drug gangs, to trade deals, to U.S. immigration policy and enforcement, etc.

“It’s a complicated, twisting picture, but we were there to sort out all the different strands to see how they came together to create this situation,” Fisher said.

‘Whenever I’d heard about the border, it was on TV’

The nightly talks also helped students process ideas of what they might be able to do to help, despite the complexities. Because their work didn’t end when they flew back to Williamsburg; they still had to complete research projects this spring.

“We think of research typically as a lone-wolf enterprise. It’s one scholar with a pile of books,” Arries said. “The nice thing about this course is there are teams of students working on projects, and that camaraderie is not typically what we think of in terms of research.”

One of the first things the students collectively realized is that the human story of the borderlands is not being told throughout America. “Whenever I’d heard about the border, it was on TV. Whatever I saw on TV was about violence and drugs, and deserts and walls,” Garrett said. “And when I got there, it’s about people. And there’s a Walmart a stone’s throw from the border on the American side. It’s got this strange familiarity to it, and yet it’s got this really tangible bizarreness to it.”

Garrett’s photos and videos were to feature heavily in a project when students created a presentation about immigration and delivered it to an Advanced Placement Spanish class at Bruton High School in York County.

“Simply educating people about what was going on, even if we couldn’t necessarily change the political atmosphere around it, we could at least expose some people to the material realities of the situation,” Monette said. “Maybe that would change the collective attitude, which is one vehicle of political change.”

“It is a human problem in which human dignity is at stake,” agreed Hernandez. “It’s so easy to take the individual out of it. We look at policy, and what big move the government or the president needs to do, and that’s great. I want change in policy – don’t get me wrong. However, let us not forget … humans are dying, families are being torn apart, and they are just as real of a family as yours or mine.”

Garrett said she felt the importance of education couldn’t be overstated. “When we learn about people and address the injustices people face, it is our victory as well as theirs,” she said. “When we create a culture that doesn’t tolerate people being dehumanized on a systemic scale, it’s everyone’s victory, not just people on the border. That was a totally new concept to me.”

The second project furthers Café Justo locally. Café Justo is a cooperative formed by small-scale farmers in the Mexican state of Chiapas to sell their coffee directly to U.S. consumers, making agriculture viable in that region. The student group has surveyed fair trade initiatives on campus and is negotiating with food vendor Sodexo to begin carrying Café Justo on campus.

Both projects tie back to what the students said they learned specifically about making an impact in the face of overwhelming challenges.

“As activists, sometimes we can take this really large, helicopter-type view of a social problem, and never engage in the very tangible problems,” Hernandez said. “That’s a problem I’ve seen working in religious organizations; it’s easy to fix problems without giving solutions for tangible things. People need work. People need money. It’s great to talk about these concepts of justice and freedom, but at the end of the day, people need money. So what tangible things can we do to address those issues?”

Hernandez said she was overcome at the trailside grave, questioning later how activists can face those realities every day without becoming paralyzed. “That was a difficult day,” she said. “And I asked, ‘How do you feel the weight of these types of social problems without letting it ruin you? How do you get up in the morning if you’re also feeling the pain of the work that you’re doing?’”

Their BorderLinks hosts helped the students navigate those kinds of questions. One shared her own experiences and advised Hernandez to “be a sifter.” That is, to witness and feel everything that comes at her, but not hold onto it unduly, especially things that Hernandez can’t do anything about. Instead, she was told to focus on where she can help.

Garrett said another BorderLinks trip leader emphasized “celebrad” – to celebrate. “When we have a really tough, overwhelming day, that we still have fun together eating dinner around the table, and that that’s something worth putting effort into,” she said. “That was something totally new, because being involved in issues of justice and human rights, I think I had adopted a certain sense of stoicism. These are serious topics and they deserve serious attention. But a certain sense of thankfulness for each other isn’t going to take away from that.”