As students begin departing for their winter holiday break, R. Benedito Ferrão will spend his new year in Goa, employing the power of art and remembrance to actualize a modified understanding of the region’s cultural identity.

“I think art is so important because it literally illustrates the kinds of things that get forgotten,” said Ferrão, enthusiastically explaining the significance of one octogenarian artist — Vamona Navelcar — who represents the complexity of a hidden culture and serves as the subject of Ferrão’s research initiative. 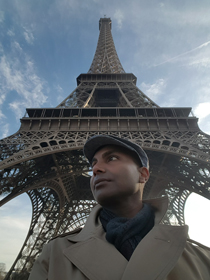 Ferrão, an assistant professor of English and Asian & Pacific Islander American studies at William & Mary, will be presenting an exhibition in Goa from Dec. 12, 2017, to Jan. 12, 2018. Titled “Goa/Portugal/Mozambique: The Many Lives of Vamona Navelcar,” the event will feature and celebrate Navelcar’s artistic work, complex story and cultural legacy.

Ferrão emphasized that Vamona Navelcar’s story embodies the multiplicity of experiences and cultures that constitute the Goan identity. Having become indirectly “embroiled” in the historical and cultural consequences of decolonization, Navelcar “speaks to a forgotten time and place in the world.”

Before fully addressing the value of Navelcar’s story, Ferrão articulated the importance of understanding the world Navelcar inhabited as a Goan artist during the period of decolonization.

Navelcar grew up in Goa, what Ferrão termed “a very tiny part of the world” that was colonized by the Portuguese in 1510. In 1961, India invaded Goa, seizing control from the Portuguese. Shortly before this claim to power, Ferrão explained that the young artist, Navelcar, became unexpectedly enmeshed in the region’s political affairs. He received a scholarship from the then-Portuguese-dictator to travel to Portugal and practice his art.

“I think the dictator was doing a little bit of ‘PR’ here,” said Ferrão with a laugh. “These are the waning days of colonialism. British India has already disbanded. The Portuguese are holding on as steadfastly as they can to these few dominions they have left around the world.” 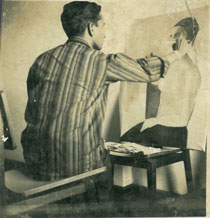 Following Navelcar’s travel to Portugal and the 1961 Indian takeover of Goa, Navelcar found himself in a precarious situation: “He is a Portuguese citizen of Goan origin, but now Goa is no longer Portuguese,” Ferrão said. Instead of returning home, Navelcar traveled to Mozambique, where the newly decolonized government places him, among other artists, into a hard labor camp. When he is freed, Ferrão said, “He’s so heartbroken from what happened to him that he decides to leave and return to Portugal. He gets to [Portugal], but his suitcase doesn’t. In one fell swoop, he loses everything. His suitcase is never found.”

In a few years, when the artist returns to Goa, then under Indian control, he finds “the aesthetic, the way of thinking about art, does not include him.” The artistic mores of India, having “communicated themselves to Goa,” had developed into the “dominant strain of culture and heritage,” Ferrão explained.

“There’s a push towards the fixity of Goan identity as it must only mirror Indian identity — I call it a push because that’s not what Goan identity is, it is these multiple things,” he said. 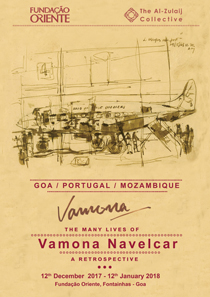 At the time, Ferrão said, Navelcar’s art doesn’t “fit into the larger imaginary of the way in which India thinks of itself and the world thinks of India,” which had become intertwined with the global understanding of Goa. As a result, Navelcar’s art, which embodies a distinct cultural complexity of his own life, and the Goan experience, becomes largely unappreciated.

When Ferrão first learned of Navelcar’s story while residing in Goa, he was captivated. He recognized an overlap with his own personal history, his mother having been born and raised in East Africa, and his father having lived in Portuguese Goa.

“These stories were not foreign to my own existence, but they seemed to be rapidly forgotten in the contemporary moment,” he said. “Here is a man from that past who is still living, but yet seemed to be forgotten. To this day, he continues to produce art that speaks to these multiple strands of Goan history, and also world history at the same time.” 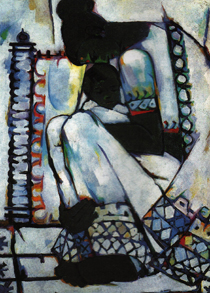 Today, Ferrão is encouraging more people to stand up and pay attention. As a member of the Al-Zulaij Collective, working in conjunction with the Fundação Oriente to host the event in Goa, Ferrão is offering the exhibition to “resurface not only [Vamona Navelcar,] but a kind of heritage that’s still living.”

Asked to articulate the implications of the exhibition for the Goan, and global, community, Ferrão explained, “There’s a Portuguese word, saudade, which means loss, yearning and nostalgia. Even in saying that, there’s no direct equivalent in English. The condition of saudade could be taken to mean ‘loss,’ but the word is both ‘loss’ and ‘nostalgia.’ There’s that small space in this strange word that tells us just because something is not seen, it doesn’t mean it goes away.

“Navelcar’s very presence, his art and life story are a reminder that even though the politics of place or the dominant heritage of a place might represent one thing, there are several things on the margin that don’t go away. By not paying attention to them, we’re doing them a huge disservice.”

Ferrão’s month-long exhibition will tell a story about Goa that corrects this disservice by connecting the region to multiple paths of the world, addressing the intricacies of Goan identity, and bringing back to life that which has been forgotten, but will never go away.