Just a few weeks—and a few feet of soil—can reveal a different perspective and experience.

This year’s Archaeological Field School session one students arrived at the Brafferton site to find a disrupted mix of eighteenth-century and twentieth-century soils due to years of human influence.

“Students had to look at what they were finding and try to interpret it through a historical perspective while noting modern-day influences like the addition of landscaping and utility lines,” says Mark Kostro, a Ph.D. Anthropology student who is leading the dig. “With mixed soils, it is hard to associate an artifact with a particular timeframe.” 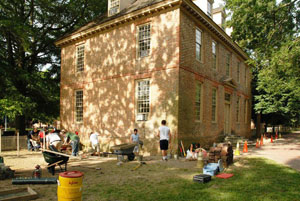 When the session two students arrived four weeks later, most of the mixed layers of soil had been removed, and the freshly exposed features were clearly from the eighteenth century. Because they knew the context of their findings, the perspective changed.

“It’s easy to look at something as simple and everyday as dirt and make certain assumptions,” says Kostro. “Archeology is about looking at things in a different way, from different angles and perspectives. The field school gives students an opportunity to gain new technical skills and, just as importantly, new thinking skills.”

Students in both sessions learned excavation techniques and recording, as well as the identification of common eighteenth-century artifacts. They were introduced to archaeology’s specialties, including artifact 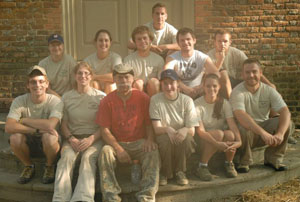 conservation, public archaeology, and zooarchaeology, through lectures and required reading.

Although the classwork was essentially the same, each session involved different applications on the ground. In session two, more of the lab work included working with the actual items the students found. Session two students also had the opportunity to visit the Pamunkey Indian Reservation in King William County and learn more about one of the Indian tribes who sent students to the Brafferton in the eighteenth century.

Toward the end of the third week of session two, a brick structure was uncovered that turned out to be a late-1700s 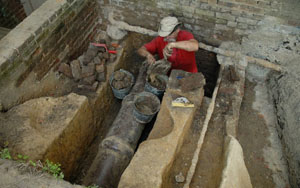 sump built below the Brafferton basement floor to drain water. Within the abandoned structure was four feet of 18th-century debris, including three cannonballs, creamware plates, a pewter spoon, and a black basalt stoneware teapot and sugar bowl, among other items. It was quite a find.

“We had to ask ourselves, why are we finding these things here? What are they telling us?” says Kostro.

“The students add a lot of value to the work, because they ask questions I wouldn’t have thought of. They also ask routine questions that force me to relook at my routine answer to see if it still holds true. The students are constantly thinking and talking about how to interpret what they are seeing. It keeps things moving along, and it keeps me on my toes.”

The field school ended August 5, but the work at the Brafferton will continue until mid-September to give the field staff time to finish the excavations and finalize the documentation of the summer’s findings. 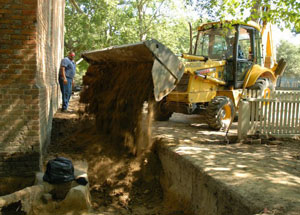 With a basement foundation under only half the Brafferton structure, the shallow-set foundation on the other half of the building posed a concern if left exposed for too long. The open excavation trenches will be backfilled with the same dirt the students previously removed. The site will then be covered with loose hay to help avoid runoff. To ensure that the unexplored portions of the site are not disturbed during the upcoming Brafferton renovation and waterproofing, a map delineating the extent of archaeological excavations will serve as an important planning guide for engineers and renovation contractors.

Finally, in September, once all the archaeological fieldwork is complete, a tobacco offering collected at a ceremony before the start of the archaeological fieldwork will be interred respectfully at the Brafferton.  The pre-excavation ceremony was organized with the assistance of the Brafferton Legacy Group, an advisory group of W&M alumni who are members of federal and state Indian tribes that have historical links to the eighteenth-century school. The tobacco is symbolic of participants’ wishes for the Brafferton and for the renewal project.

“Working the Brafferton this summer was a tremendous opportunity,” says Kostro. “The Brafferton’s renovation and the archaeological fieldwork done this summer in advance of the renovation work serves as a point of departure to renew the longstanding ties that many Native peoples have to William and Mary. Likewise, it has also been a great opportunity to teach students about the origins of their own campus, in addition to the nuts and bolts of archaeological fieldwork.”