The year is 2035. You and your crewmates on Ares III are exploring a plain on the surface of Mars. Suddenly, a strong sandstorm forces the crew to abort the mission. During evacuation, you, the mission’s botanist, are struck by debris and you disappear into a cloud of dust.

Your fellow astronauts leave you for dead, but you’re still very much alive, alone and stuck on Mars. To survive, you improvise a potato farm on Martian soil.

“So that’s basically the plot of ‘The Martian,” said Jon Kay, describing the 2015 film starring Matt Damon. Kay, a visiting assistant professor of geology at William & Mary, is using the hypothetical situation Damon’s character finds himself in — being stranded on Mars and forced to grow his own food — as a real research question for students in his new COLL 150 class Science and Science Fiction.

“I thought it would be fun if we tried to replicate his little experiment,” Kay said. 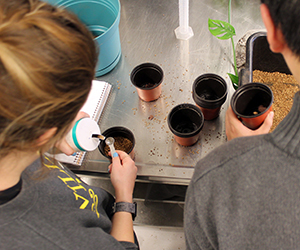 Kay supplied the 16 freshmen in his class with the makings of Martian soil for their own little Martian potato farm. There’s salt to simulate the planet’s high level of perchlorates. There’s iron-rich clay to simulate regolith, the rocky material that covers the surface of Mars and other extraterrestrial bodies. And then there’s potting soil, which Kay concedes would have to be hauled up from Earth.

“As far as we know, the soil on Mars doesn’t have any organisms or micronutrients. It's just sort of like substrate,” Kay explained. “We know we’d probably need to bring some soil from Earth, but we’re trying to figure out the minimum amount of extra material we’d need to bring in order to grow some sort of food we could eat.”

There’s also the problem of hauling up water, which has yet to be found in plentiful liquid form on Mars. In “The Martian,” Damon’s character, astronaut Mark Watney, produces water by burning leftover rocket fuel and extracts the hydrogen from the resulting chemical reaction.

“I made the executive decision to skip that part of his process,” Kay said. “First, it’s not safe. Also, rocket fuel wasn’t really in the budget.”

The course is designed to play up the intersection between science and science fiction, Kay says. There is the plausible science (using rocket fuel as a source for water) and the downright impossible fiction (Mars sandstorms are not strong enough to cause damage. They’re more like gentle breezes.).

So while the overall Martian scenario may be fictional, the science in COLL 150 is very real. Kay explained that the students are tasked with collecting data on every part of the potato-growing process. They must water their potatoes and keep track of how much water they administer and how often. 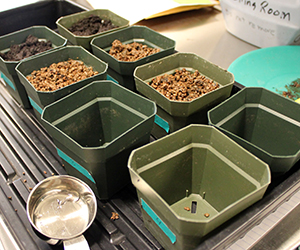 Hypothetically, the Mars potatoes would be grown in a closed-loop system, like a greenhouse, so whatever water they use would have to be collected after evaporation and reused throughout the entire lifecycle of the plants.

Water is just one of a series of elements the students are tracking. Each student team selected varying ratios of Mars soil to potting soil, with the goal producing a potato grown in the highest percentage of Mars soil possible.

Kay has controls for either end of the spectrum, with one potato planted in 100 percent Mars soil and another in 100 percent potting soil. The students are planting within the full range in between, and some are even going off the range entirely.

“Originally we were just going to do potting soil-to-Mars-soil mixes, but some students wanted to expand the experiment,” Kay said. For example, one group of amateur astrobiologists decided to forego the potting soil and add fertilizer to the Martian soil.

Another group is adding salt to the mix to see if it works as a fertilizer. Another group ground up the Mars soil to see if smaller particles would make it easier on the potato. Kay even special ordered a five-pound bag of wet clay for a group that wanted to test if the absorption rate was better than dry clay.

“We’re going to test how well wet clay holds water,” said Evin Connolly ’23, as he meticulously added teaspoon-sized lumps of clay to his planters. “We wanted to test wet clay along with all the other variables, which is actually more complicated than I thought — but that’s science.”