Oysters once dominated the ecosystem of the Chesapeake Bay, and it would be difficult, if not impossible, for the Bay to return to full ecological health without restoring Crassotrea virginica to its glory days of the Chesapeake’s apex filterer.

Rowan Lockwood and Roger Mann believe that you have to go back to the fossil record to get your head around the idea of a fully oystered Chesapeake. Their paper, “A conservation palaeobiological perspective on Chesapeake Bay oysters,” appears in a special issue of Philosophical Transactions B, titled “‘The past is a foreign country: how much can the fossil record actually inform conservation?’.

Lockwood is a professor in William & Mary’s Department of Geology, which she chairs. Mann is a professor in the Department of Fisheries Science at the university’s Virginia Institute of Marine Science. Their collaboration melds Lockwood’s examination of long-dead oysters in the Chesapeake with Mann’s expertise in the state of oysters today.

Their paper looks at 900 fossil oysters from three Pleistocene reefs and compares them to oysters today. Lockwood and Mann employ conservation paleontology methods to create a model of how the Chesapeake Bay looked and functioned long before humans.

The paper cites a three-pronged challenge faced by oyster-based ecosystems and those who want to restore them to the Chesapeake and elsewhere: overharvesting, disease and coastal degradation.

The Bay’s oyster population is about one percent of its historical level. The paper cites population densities that range from 1,500 oysters per square meter to zero. Centuries of oyster harvest can explain the crash in abundance, but a knottier problem is size — the oysters are running smaller. Modern oysters are around 30 percent smaller than their remote ancestors.

“There is a fundamental and poorly understood problem with longevity and terminal size in extant oyster populations,” Mann said. “Over the past 20 or so years, our stock assessment program has measured over 2 million oysters in the Virginia Chesapeake Bay and large oysters of the size commonly found in fossil population are exceedingly rare.” 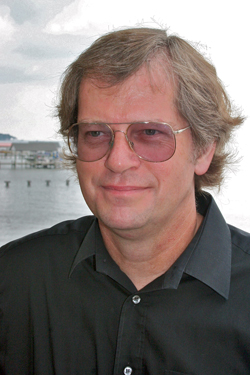 Mann points out that the growth rate of James River oysters today are comparable to the shells recovered from the well at Jamestown Island, a good proxy for the very first oystering by European colonists.

Lockwood adds that the Chesapeake oysters have shown the same growth rate since the Pleistocene, “which means that the oysters are growing just as well today as they always have,” she said.

She added that researchers have found some rare pockets of Pleistocene-sized oysters in areas where there has been no harvesting and poaching. Lockwood points out that the reason that oysters are running smaller is simply that they’re not living as long.

“So what could the problem be? We can start with two now endemic diseases — MSX and Dermo — that slowly kill oysters,” Mann said. “Even though there is mounting evidence of tolerance —not resistance — to these diseases, they remain present with both substantial prevalence and intensity.”

Mann added that another issue stems from the overall decline in water quality, a result of heavy human development up through the entire Chesapeake watershed.

“Oysters are tolerant,” he said, “but we should not be at all surprised by the challenging growing conditions resulting in earlier mortality in extant populations.”

Lockwood points to overharvesting as the third challenge to Chesapeake oysters. She believes it’s the main driver in the suppression of oyster size and abundance. Bigger oysters are more fecund and more resistant to disease, in addition to being better filters.

But oysters are the object of a long-standing and efficient fishery. Current oystering techniques can scoop up the shellfish before they can even get near their maximum size. And an oyster on a plate or in a stew has filtered its last gulp of the Chesapeake.

Mann explained that oysters are instrumental drivers in an ecological process known as benthic-pelagic coupling. Put simply, the term refers to the nutrient exchange between the benthic (bottom) layer and the pelagic (top) layer of the water column.

Examination of fossil oysters by Lockwood and other scientists produced a record that oysters ruled the Chesapeake and other mid-Atlantic estuaries for three million years. They hung tough through times in which sea levels rose and fell, the spat migrating up and down the Bay to form new reefs in new territory. 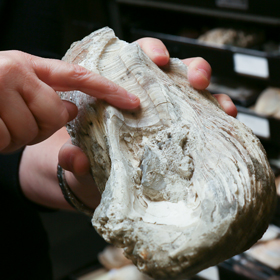 Human harvest of oysters was probably sustainable until the colonial period, but the invention of the oyster dredge increased the take by a couple of orders of magnitude. There are now limits on dredging in both Maryland and Virginia. And there have been mitigation efforts, mainly aimed at maintaining the fishery, Mann says.

Mann also points out that there is more to the problem than the role of the oyster fishery. He noted that the estimated population of the Chesapeake watershed was below one million in pre-colonial times.

“That number is now around 14 million, and we all have high-impact footprints,” he said. “All of this translates into Bay water impact. It is not just about fishing, it is about the 14 million.”

Lockwood concurs: “It's a delicate balance, weighing the needs of the people, cultures, and ecosystems that rely on the Bay. I'd love to see us take a longer-term perspective to Bay restoration, one that is informed by evolution and ecology.”