A William & Mary student used a Charles Center grant to spend the summer studying a little-known population of turtles on the York River. She will soon present her research at a symposium of conservation experts.

Abigail Belvin '20 conducted an ecological study on the diamondback terrapins that live on the Catlett Islands in the York River. The Catlett Islands are a string of small islands about 35 km upriver from the Chesapeake Bay.

Her research advisor, Biology Professor and Director of the Keck Lab Randy Chambers, said the population of the islands’ terrapins was uncertain, as no one had studied it before.

“We knew there were terrapins out there, but we didn’t know how large the population was,” Chambers said. 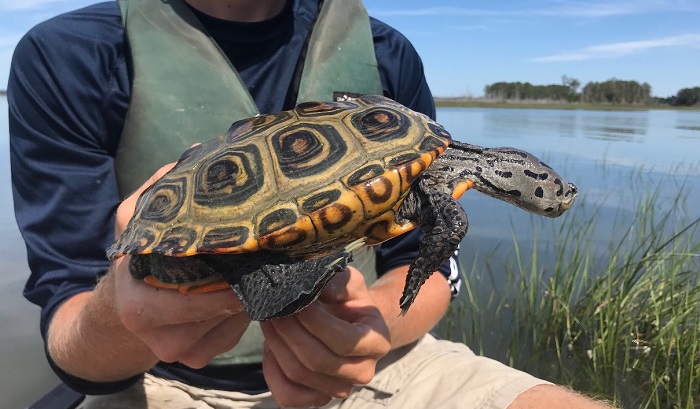 Terrapins play a vital role in the area’s ecosystem, as the small turtles feed on snails and crabs and are in turn preyed upon by raccoons and birds. A healthy terrapin population could thus be an indicator of a healthy ecosystem.

Belvin visited the islands several times per week, checking crab pots she and her research partner set and baited in order to capture and track terrapins. Lured by the bait, the terrapins swam into the traps. The next day, Belvin marked and released them to avoid counting them twice if they fell for the bait again.

The researchers counted 78 terrapins throughout the seven-week project, and zero recaptures — which Chambers said likely indicates the population was larger than expected. After all, capturing the same few turtles again and again would indicate a very small number of terrapins living in the area.

Belvin will present her research project at the Eighth Symposium on the Ecology Conservation and Status of the Diamondback Terrapin in Wilmington, North Carolina, this month. Participants include members of scientific, regulatory and academic institutions to discuss conservation and management strategies for the species.

“For my future career, I actually want to be a researcher or professor, so being able to do this research here has been an amazing opportunity for me," Belvin said. "Not only am I getting experience and help with my resume, but I also just really enjoy it.”

Belvin received a $3,000 Charles Center Summer Research Grant to help fund her summer research. She said the funds were spent on bait for the traps, equipment and gasoline for their canoe’s motor. The funding also helped her afford living expenses and, thus, dedicate her time and attention to her research project.

“It allowed me to focus on my research and focus on what I want to do for the future, as opposed to having to be worried about working multiple jobs,” Belvin said. “I just wouldn’t have had the money out of pocket to be able to do this project without some sort of outside funding."

Chambers said research projects like Belvin’s are critical for species conservation and management, but funding from state or federal agencies can be tough to come by.

“It’s always the case that having that funding is absolutely critical. A lot of the research projects I do are exploratory — they’re really good opportunities for students to get involved in research at an introductory level,” Chambers said. “It’s key to have funding for a student like Abigail to go out and conduct research.”