The region around the Mississippi River town of Galena, Illinois, ran on lead for the better part of a century.

The town took its name from the local abundance of the natural mineral form of lead. By the middle of the 19th century, the Galena area was mining and refining 80 percent of the lead produced in the United States. Galena lead ended up in everything from stained glass windows to bullets.

Evidence of Galena’s lead production has showed up nearly 200 years later and some 800 miles away in what may seem like an unlikely place: Lake Matoaka on the campus of William & Mary.

But it turns out that Lake Matoaka is a geologically ideal repository of atmospheric particulates. A team of William & Mary geologists led by Jim Kaste and Nick Balascio has mined the time-capsule sediment of Lake Matoaka to find evidence that traces the development of the Industrial Revolution and the Age of the Automobile. Their data offer up insights about climate change and even sheds light on some blank spaces in the local historical record.

It used to be Archer’s Hope Swamp

“Matoaka is kind of an interesting specimen in that it has a really early date of formation, which we think is around 1700,” Balascio said. The impoundment was originally known as Ludwell’s Mill Pond, created by the damming of a wetland complex known as Archer’s Hope Swamp. Balascio, an assistant professor in the Department of Geology, added that in addition to the age, the peculiar geology of the area makes Lake Matoaka a geoarchaeological gold mine, figuratively speaking.

“It's also within the coastal plain, which means easily eroded bedrock. So the sedimentation rates in Matoaka are really quite high,” Balascio said. “That allows us to resolve past environmental changes and pollution history at a really high resolution.” 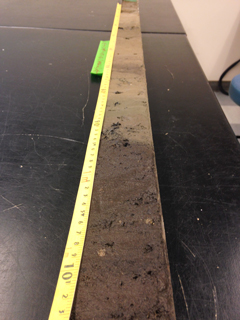 Their Matoaka corings have recorded a great deal more than the lead smeltings of Galena, offering no less than a sedimental journey through the eastern North American anthropocene. They published their geoarchaeological findings in the journal Anthropocene with an all-William & Mary slate of co-authors: Keck Lab Director Randy Chambers, Meredith Meyer, a research and lab specialist at VIMS; and students Madison Renshaw ’18 and Kassandra Smith ’17.

The Anthropocene paper is by no means the last word on the subject. The Matoaka coring is an ongoing project and has provided a stream of topics for students in the Department of Geology.

“We’ve had students pick through the sediment centimeter by centimeter,” Kaste said.

“We've done four or five undergraduate theses on the sediment of Lake Matoaka,” Balascio added. “Each student has looked at one individual measurement and we've kind of integrated them over the years.”

SPCs: A relic of coal fires

One of those undergraduates is Kayla Cahoon ’18, who gave a presentation at a luncheon gathering of faculty and students associated with William & Mary’s Environmental Science & Policy program. Her individual measurement was teeny bits known as spheroidal carbonaceous particles, or SPCs.

“They come from burning coal. When you burn coal there two main things that happen. There is the stuff that's left in the bottom of the furnace; that's called coal ash,” Cahoon explained. “And then there are the particles that come up through the flue and into the atmosphere. That's what is known as fly ash.”

She went on to say that SCPs represent five to ten percent of all the fly ash from any burning coal source. Drifting fly ash — and the SCPs it contains — can drift in the atmosphere anywhere from one kilometer to thousands of kilometers from the source, Cahoon said.

Cahoon studied a Lake Matoaka core that reached back to the time when the dam was first built. She prepped her core sample in a series of caustic baths — nitric acid, hydrogen peroxide, hydrofluoric acid and hydrochloric acid.

“I wanted to eat away at all the dirt and mud and stuff to leave behind only these carbon particles,” she said. “Then I mounted those on slides and spent hours point counting. Up and down and up and down for each slide.”

SPCs are, on average, between 20 and 30 microns in size. Cahoon examined her slides on a scanning electron microscope in William & Mary’s Integrated Science Center, but her workhorse instrument was a binocular reflective microscope.

Comparing the peaks and declines with historical records

Cahoon and her fellow geoarchaeological researchers count those bits of pollution so that they can compare relative abundance of the particulates from the cores with historical records. In Cahoon’s case she saw a peak in the SCPs that corresponded to the beginning of the American Civil War in 1861. There was an even bigger peak from around 1914 in 1918, corresponding to World War I.

And there were decreases. Cahoon said the first national carbon emission legislation came into effect in 1973, recorded in the sediment of Lake Matoaka as a drop in SCPs. Another SCP drop was recorded in 1993, when the carbon particles at coal-burning power plants started being caught in flue vent scrubbers and deposited in landfills.

All of those peaks and valleys show up in other studies of sediment cores, but Cahoon said she found something closer to home. Something that she hadn't seen in her extensive review of the literature.

“I found a peak in the late 1700s, which is consistent with the Revolutionary War and also with the growth of Williamsburg,” she said. “Nobody else had this in the literature. Nobody else had any kind of SCP particle collection prior to 1830 or thereabouts.”

“I started really digging into the historical aspect of this. I found some things that we all know,” Cahoon said. “In 1699, Williamsburg became the capital of Virginia and it was here until 1780.

“But it wasn't just the political capital, it was also the industrial capital,” she continued. “There was a large amount of industry happening here in Williamsburg. The primary one was the James Anderson Armory.”

The James Anderson Armory, or a recreated version of it, is in operation in Colonial Williamsburg. Cahoon interviewed Ken Schwartz, master blacksmith at the facility, and also took samples from their forge fires and flues. The Anderson Armory of the early 18th century was a place of considerable activity.

“We know that from 1765 to 1780, he was running eight forges a day for 18 hours a day,” she said. “All burning coal. So what we realized is that we have a really unique story of fossil-fuel use well before the onset of the Industrial Revolution. Before all the factories. Before all the trains arrived.”

The pollutants of the past are the data points of the present. The archival sediment of Lake Matoaka has recorded more than SCPs. Kaste is an associate professor in the geology department and currently serves as director of William & Mary’s Environmental Science & Policy Program. He explained that lead and mercury are additional byproducts of coal combustion.

“So where you have SCPs, you can expect to have those heavy metal contaminants — it’s amazing how closely those data match SCP data,” he said.

But, mercury gets into the environment from other sources than burning coal. One student project looked at mercury and Kaste said they found a mercury peak right before 1900. It was a relic of the era’s coinage.

“There was a lot of silver mining in the United States in 1880 to 1890, he said. “When you mine for silver or lead, you mine for mercury accidentally, because they're associated with the same rock type. So when you do silver mining, you end up emitting a lot of mercury into the atmosphere.“

The tale-tell chemical signature of lead

Like mercury, lead enters the environment from a number of sources beyond coal fires. Lead particulate is also produced by smelting of lead, of course. Kaste said the sediment cores revealed a consistent rise in the lead concentration from 1700 to 1750, consistent with the industrial growth of Williamsburg in the colonial era.

“What's interesting is it you see a drop-off right after the American Revolution,” he said. “This is consistent with historical records that suggest that Williamsburg kind of fell off after the capital was moved to Richmond.”

Another peak showed up around 1860, consistent with the apex of the Galena lead industry. Kaste explained that they can tell the difference between lead from a smelter and lead from a coal fire or other sources. (Mercury has similar diagnostic chemical signatures.)

“Lead has different isotopic signatures,” he said. “There’s lead 206, 207, 208. Coal, for example, is enriched in lead 207, whereas the weathering of sediments is enriched in another isotope.”

Their sophisticated chemical analysis can also reveal the source of smelted lead ore Kaste said that the lead ore from the Galena region has a very distinctive chemical signature. The upper Midwest ore body that fed the Galena smelters was eventually mined out, and Kaste, Balascio and their students were able to trace the decline of Galena lead in their Matoaka corings. But lead came back.

“We see World War II — a big jump right around 1942,” Kaste said. “That's going to be from lead mining associated with making all the bullets for the war effort. The mining there was mostly out in Idaho.”

Kaste said there was a slight dip after the war, and then America entered an era he called “peak lead.”

“In the 1960s, we use lead in gasoline. Every time you filled up your tank, you put tetraethyl lead in your gas tank,” Kaste said. “And then when you pressed on the accelerator and burned gas, the lead went out your tailpipe and it went up and moved around a couple hundred miles and then came back down whenever it rained.”

And the 1977 enacting of clean air legislation and the advent of unleaded gasoline were duly noted by a rather sudden disappearance of certain lead isotopes in Lake Matoaka sediment.

“When I teach introductory environmental science and policy, I like to use this as an example of legislation that worked,” Kaste said. “You can see this in ice cores, you can see this in lake sediments. Once we made the lead illegal to put in gasoline, the atmosphere got cleaned up pretty quickly.”