The study, called “How China Lends,” was undertaken by a group of researchers from AidData, the Center for Global Development, the Kiel Institute for the World Economy and the Peterson Institute for International Economics. It provides evidence that Chinese loan contracts contain unusual secrecy provisions, collateral requirements and debt renegotiation restrictions. 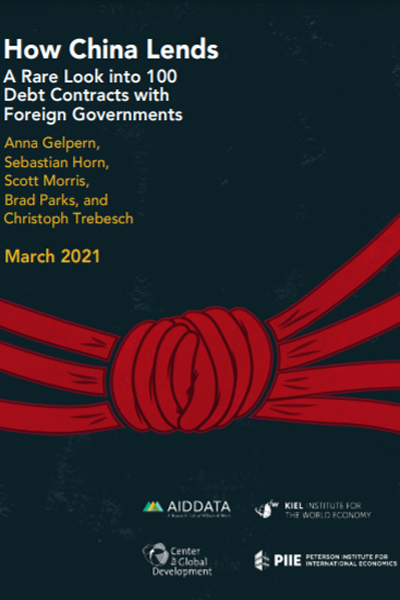 The report is based on the largest source of unredacted loan contracts between Chinese government lenders and developing country borrowers ever assembled, said AidData Executive Director Brad Parks ’03. It has received substantial media coverage around the world and captured the attention of policymakers in Washington, London, Berlin, Tokyo and Beijing.

“We received a request to brief senior U.S. government officials within 72 hours of the report being made public,” Parks said. “Soon after the report was made public, it was circulating within the World Bank, the IMF and G7 finance ministries. We were asked to do White House and Capitol Hill briefings. There's just a huge level of demand for this information because of the scarcity of hard evidence.”

Work for the project was divided up among research teams at AidData, Georgetown Law School and the Kiel Institute for the World Economy in Germany.

The team at AidData, a research lab at W&M's Global Research Institute, was responsible for retrieving the contracts, which involved scouring the debt information management systems, official registers and parliamentary websites of 200 borrower countries.

Over the course of three years, the team at AidData uncovered 100 unredacted Chinese loan contracts issued to 24 borrower countries across Africa, Latin America, Asia-Pacific and Eastern Europe. All of those contracts are now published in a searchable online repository.

“This is a big deal because a lot of people want to know more about the terms and conditions of Chinese lending, but most of these loan agreements are protected by strict confidentiality requirements,” Parks said. “None of the contracts would have been obtained if not for the AidData team at William & Mary. Nearly 100 students, staff and faculty at William & Mary were involved in the retrieval of the contracts.”

Many W&M students, including Jack Mackey ’21, were involved in the three-year project from its early stages.

“It’s amazing once you have it done and you can look back and say, ‘Wow, I was able to document where all of this money went, how it was spent, what was happening in each one of these countries,’” he said.

The process for uncovering the loan contracts was exhaustive – and sometimes exhausting. Researchers scoured the internet for information, and for every find they made, there were hundreds of misses.

There were many challenges, from obscurely designed websites to contracts written in foreign languages that required the skills of multi-lingual research assistants.

“It's almost like a little investigation every time you're trying to find information,” Paige Jacobson ’21 said. “Sometimes it’s a pretty simple project and it's pretty straightforward, but other times it's like you're decoding something. I felt like a detective at times.”

The study received coverage from media outlets in multiple countries, including The Economist, the Financial Times, Bloomberg and the Associated Press.

The secrecy of China’s loan practices was one of the study’s most significant findings. Chinese state-owned lenders have signed more than 2,000 loan agreements with developing countries since 2000, but AidData found only 100 that were made public.

The contracts point to a major policy problem, Parks said. China is lending record amounts of money to foreign governments, but these public debts are shrouded in secrecy.

“Who’s going to repay these loans? It's not going to be the president or the finance minister who signed on the dotted line,” Parks said. “It’s the taxpayers in borrower countries who are ultimately on the hook, so shouldn’t they understand their repayment obligations? Why should public debt not be public?”

Jacobson, an international relations and economics major, started working with the AidData team in 2018 when she was a sophomore. She was looking for ways to get involved and saw an announcement in a student email newsletter about openings at the research lab.

“The team wasn't as well-known at the time, so I was fortunate enough to get a spot and then stayed on,” said Jacobson, who started as an intern and is now working in quality assurance. “It was a great fit for me to get experience in research and gain exposure to international development financing.”

Mackey, an English and Gender, Sexuality & Women’s Studies major, became interested in international policy as a freshman and joined AidData as a research assistant in 2019. He moved up the ranks to his current role in quality assurance.

Some studies take years to have the desired impact. Park says there’s value in students starting research early at W&M to see a payoff for their hard work.

“They get to see multiple stages of the scientific discovery process as well as the policy impact of the research that is produced,” Parks said.

Both Jacobson and Mackey plan to stay on at AidData through the summer to continue work on the project.

This is only the tip of the iceberg of what AidData hopes to accomplish with this project.

“The ‘How China Lends’ project did a deep analysis of 100 contracts. As we look to the future, we’re planning to go deep and wide,” Parks said. “There are thousands of Chinese loan contracts for which we have not yet uncovered the same level of detail, but we’re going after those now.”