Martha Case begins talking about Japanese stilt grass, and your first thought might be that the stuff would be just the ticket for a nice, low-maintenance yard.

“It's actually kind of pretty,” she says. “It’s very bright green. It looks like bamboo grass. It's very lush and thick, and grows in very dense stands. Wooded areas — places that have moderate shade? This thing can tolerate it very well.”

“It’s not an ideal grass at all,” she explained. “The problem is that it’s an annual: It’s going to come up in the spring; it’s going to grow to maturity; it’s going to set flower and seed. And then die.”

Case said that lawn grass species are perennials that develop nice, robust root structures to live through the winter. Annuals put all their energy into a year’s life cycle of growth-flower-seed. Japanese stilt grass is an invasive species that has a modus operandi of choking out everything else during the growing season. Then it dies, leaving the ground barren. Not what you want in a yard.

Case is an associate professor in William & Mary’s Department of Biology and the College Conservator of Botanical Collections. She is one of a group of people who are concerned about the silent green invasion of the campus by Japanese stilt grass.

A group of volunteers joined Case and Linda Morse to clear out the Japanese stilt grass from William & Mary’s Crim Dell. It’s part of a continuing effort to rid Crim Dell of invasive plants and return native species of vegetation to the university landmark.

Morse is a lecturer in the university’s Department of Geology, a Virginia Master Naturalist and the advisor to the Crim Dell Restoration project of the W&M Student Environmental Action Coalition (SEAC). SEAC organizes weekend work days in Crim Dell and musters volunteers from other student organizations and from the community.

“I'm getting Martha more involved in the weekend events because she knows the invasive plants; I don't,” Morse said. “And, we hope to plant more woody plants on the slopes on Saturday, November 9 —depending on the drought. We’ll remove vines, vines, vines. I put a call out for volunteers and they always show up!” 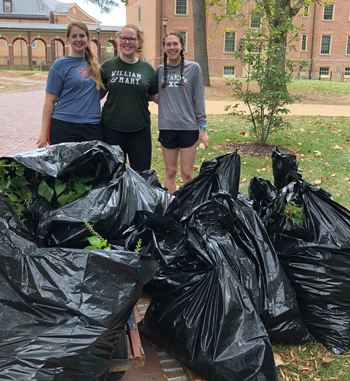 The stilt grass eradication drew a crew of nearly two dozen. In addition to the SEAC members led by restoration co-chairs Danie Barnes ’20 and Madison Powell ’21, there were delegations from the Nu Rho chapter of the co-ed service fraternity Alpha Phi Omega, people from the geology and biology departments, community Master Naturalists and the Williamsburg Plant Rescue Team of the John Clayton Chapter of the Virginia Native Plant Society. “And even the parents of one student,” Case said. (It was Family Weekend.)

Case gave a short talk on the plant. Working with her student assistant Jordan Martin ’20, who also serves as garden and natural areas steward, they flagged areas where the stilt grass was thickest.

“The volunteers searched and destroyed,” Case said. “We found substantial patches that would have likely gone undetected until a massive problem was upon us.”

Case and Martin taught the crew to recognize Japanese stilt grass and were careful to emphasize the invasive plant’s Achilles’ heel — its roots. The same wimpy root structure of stilt grass that makes it especially undesirable because it leaves the land ripe for erosion, also makes the stuff easy to pull up.

The crew filled 17 45-gallon bags, Case said. Most of it was the targeted stilt grass, but other uprooted undesirables went into the bags as well: Japanese honeysuckle, beefsteak plant, English ivy.

The naturalization of Crim Dell is very much a work in progress and is likely to require more work in years to come, Case said. The pond was drained and dredged in May 2018. Last year, goats were brought in to graze down some of the undesirable plants — mostly bamboo. SEAC members and other students put up a 24-hour watch during the time. But Case said bringing back the goats is not a good idea.

“The problem with goats is that they eat everything,” Case explained. “They eat the invasive plants and they eat the native plants that you want to grow. Goats don’t care.”