In a 30-year career at William & Mary that Sharon Zuber said has been filled with joy, one thing has continually afforded her the most gratification and fulfillment.

“Our movement into communication using a variety of modes has brought together my love of working with students in the Writing Resources Center and teaching video and documentary,” Zuber said. “[But] teaching and being able to mentor the students still gives me the most satisfaction.”

That was a sentiment echoed repeatedly by the colleagues and admirers who successfully nominated her for the Thomas Jefferson Award, presented annually at Charter Day to a member of the William & Mary family for significant service through his or her personal activities, influence and leadership. This year’s Charter Day ceremony will take place at 4 p.m. Feb. 10 in Kaplan Arena.

As senior lecturer of English and Director of the Writing Resources Center, it’s hard to keep track of all of the areas where Zuber’s influence has been greatest. However, Suzanne Raitt, Chancellor Professor of English and chair of the Department of English, has a good handle on it.

Being in the spotlight on Charter Day, Zuber said, will not be a comfortable place for her. The Jefferson Award has, she added, made her “humble, reflective and thankful for the honor.”

“I feel better behind the camera when I’m teaching video production, and I like being in a support position, mentoring and facilitating,” she said.

A student once told nominator and Associate Professor of English Monica Potkay that “Professor Zuber spends her energy seeking to help students discover and develop their own insights rather than attracting attention to her own brilliance.”

In 2005, Professor of Biology Daniel Cristol said, a chance meeting with Zuber preceded an experience he never imagined possible, all involving the element mercury.

“Over the next three years this spawned two student-faculty trips to China, the addition of a half-dozen courses to the curriculum, approximately 10 undergraduate research projects, a book on studying mercury (edited by Sharon and Mike Newman from Virginia Institute of Marine Science), an interdisciplinary conference on campus with 300 participants from across the globe, a major exhibit in the Muscarelle Museum of Art and, most importantly, lasting connections between collaborating faculty from English, art, biology, VIMS, sociology and theatre,” Cristol recalled. “All of this was organized by Sharon, with me running along on her coattails trying to catch up.” 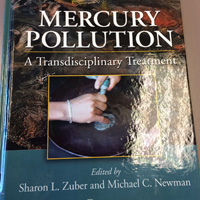 That project is, Zuber said, her fondest memory of life at W&M. Not only did W&M students travel to China, Chinese students came to America. One of them even wound up studying at VIMS and now teaches at the University of Georgia.

“When we had the expo, we had a sociologist, a historian, a VIMS biologist, film studies person and art faculty – all getting excited, sharing their ideas and making it clear how loosening up the boundaries that divided disciplines could really get people thinking in new and exciting ways,” Zuber said. “It represents how what we do here touches lives.”

Zuber’s influence extends beyond just students. She is a well-respected teacher of other faculty members.

“Since 2012, she has worked regularly with librarian Paul Showalter on multiple projects,” Carrie Cooper, dean of university libraries, wrote. “They co-present a May seminar for faculty on strategies for integrating communications and digital literacy into the COLL 100/150 courses.”

During the May seminars, Potkay added, Zuber “trained, supported and, most importantly, inspired scores of instructors teaching Freshman Seminars and COLL 150s. Sharon’s expertise has therefore benefited not just the instructors she’s taught, but through them thousands of students.”

According to her résumé, Zuber has taught 17 courses at William & Mary, several of which she created. One of her most rewarding was Film 306, a video production course never before offered that helped film study students receive some hands-on experience.

“That was really exciting because I developed it with two students who were here at the time,” she said. “One of them, Mike Risen ’01, is a teacher, and the other, Megan Gilbride ’00, is the producer of the documentary ‘Tower’ that will be shown at the Global Film Fest [on Feb. 24 at 5:30 at the Kimball Theater] .... Teaching video production brought together my interest in writing and my interest in film because any kind of production is story-telling. It’s helping students discover what stories are meaningful to them and how to think visually.”

Zuber once taught a course titled Constructing the News. In it, her students looked at the development of news and journalism historically and sociologically – but also connected to what was happening at present.

In 2011, on the anniversary of The Flat Hat’s 100th anniversary, Zuber’s students, in conjunction with Swem Library Special Collections, looked at certain themes pursued by the paper through the years. The final project included a wiki about the publication and, collaborating with Burger Archives Specialist Jennie Davy ’08, a public exhibit of their work that was displayed in the library all that summer.

“Students said, ‘I brought my parents in to see what we did,’” Zuber recalled. “They were so proud of their accomplishment.”

She paused and smiled.

“If we did that course this semester, I’d have to include things like fake news,” she mused. “So much has changed in such a short period of time.”

Through it all, Zuber has displayed a remarkable ability to represent the best William & Mary has to offer.

“She models our community’s ethos of care for our students,” wrote Stephen Sechrist, director of the Office of International Students, Scholars and Programs. “Her concern for the welfare of the individual student is evident in her passionate advocacy on behalf of some of the most vulnerable students. Unbeknownst to many colleagues, she has often worked behind the scenes with our office, the dean of students and other offices to help alleviate concerning situations.”

As Raitt put it: “She has had a profound impact on the lives of hundreds of members of the William & Mary community and on our campus culture.”