The new Stryker Center at the corner of Lafayette and South Boundary streets is hard to miss, but lesser noticed is the role of Ed Pease, William & Mary adjunct instructor in architecture.

Pease and colleague David Stemann make up the two-man architecture firm that designed the new municipal building, which opened this spring. Locally, the pair have also provided some of the early conceptual studies for the Muscarelle Museum of Art's expansion and worked on other projects while employed with Carlton Abbott & Partners, such as Colonial Williamsburg's coach and livestock facility.

The 14,000-square-foot Stryker Center replaced the 1967 municipal building of the same name, which the City of Williamsburg was using for little more than City Council meetings by the time it was demolished.

The new Stryker includes not only City Council chambers, but a council workroom, two other meeting rooms, exhibition space and office space for the Williamsburg Regional Library.

Stemann Pease Architecture won the city’s approval for the project after an almost-year-long bidding process that started out inauspiciously for the firm, Pease said.

“Our idea was to save the old Stryker, so we basically did an addition,” Pease said. “We thought that was our ace; we thought it was brilliant. That was going to win the day. We were going to save them money renovating that building so it looked like a new complex. Once we learned what they needed, I can see how that old building didn’t work. So that’s when we flunked. We failed, we really did.”

But Stemann Pease Architecture and Richmond-based construction firm Daniel & Company bounced back and prevailed in subsequent bidding rounds. They soon began to partner with City Council, former City Manager Jack Tuttle and other library and city officials on designing the new Stryker.

“Council had a series of conversations in which we talked about the concept of the building, what spirit we wanted to evoke through the architecture,” Williamsburg Mayor Paul Freiling ’83 said. “Ed was able to take the Council’s feedback from those conversations and pull them together in a way that met all of our goals.

“What we really wanted Ed to do was help us create a space that was the community’s building and where council would have the privilege of meeting. That’s what he has beautifully executed.”

In talks with the architects, city officials emphasized that they wanted the Stryker Center to send a message of welcoming transparency to the community.

“It was both a metaphor for how Williamsburg sees government and this idea of being connected to the people in town literally, as well as symbolically,” Pease explained. 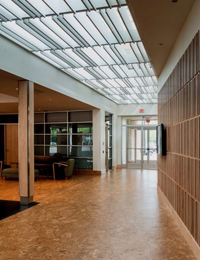 Transparency became the dominant theme in designing Stryker’s interior and exterior spaces, achieved through the materials, layout and the use of natural light in the building.

For a municipal building, Stryker is unusual in how much glass is used on the exterior, Pease said. The council workroom is glass-sided on two sides to face the corner of Lafayette and South Boundary streets. The council chamber has frosted external glass running almost the entire length of the room, mirrored on the other side by an interior glass wall. The art exhibition space, like the workroom, is entirely glass-sided on two walls.

“It’s counterintuitive when you have an exhibition space with a lot of glass because you don’t have walls to hang art on, but everyone felt like that was a minor inconvenience compared to what you see outside,” Pease said. The city purchased portable exhibition partitions to provide hanging space.

Natural light is tricky for a building the size of Stryker because it is difficult to direct it deep into the internal parts of the facility, Pease said. Stryker solves the problem of the scale of the building by use of a clerestory, an interior architectural element that rises above the rooftop to capture sunlight. Stryker’s clerestory story band of windows runs along the entire east- west corridor, allowing natural light in. A similar clerestory was planned for the north-south corridor but was deleted because of cost and technical considerations.

Another unusual aspect of the building is the decision to allow more natural light into the council chamber. Because most meetings of governing bodies are televised and sunlight is hard to control for, most municipalities avoid it. Stemann Pease worked around it by orienting the room so that it only gets direct sunlight in the mornings, when City Council doesn’t meet.

Pease also oriented the internal spaces so that they provide, as much as possible, views out of the building. He points out what few people are likely to notice: from the council chamber on the far east of the building, people can see clear through the building to the parking lot in the west.

“Not that anyone necessarily notices, but we still feel pretty good about that,” Pease said.

Stryker in the classroom

Pease usually assigns at least one semester-long realistic project to his Advanced Architecture class, in addition to shorter-term assignments, so he used the Stryker project as an opportunity for students to explore architectural principles.

The class visited the site and reviewed a scaled-down version of Williamsburg’s guiding documents. Assignments included three-dimensional models that focus only on the use of natural light or only on the way people might move through the different environments of the building, from council chambers to exhibition space to library offices.

“I can always count on my students to come up with some good ideas,” Pease said. “The great thing about them working on something like that is that they’re not well-versed on current architectural trends and what’s hot now. They just do things really honestly. They aren’t paying attention to magazines or blogs or any of that.”

At the end of the semester, Pease invited City Council to come and sit in one evening for the final project critiques. The students presented their models and explained what they were trying to accomplish and how they solved various problems through their architectural designs.

The exercise was surprisingly helpful to Council members, Freiling said.

“It helped all of us on the council be much more open to a variety of approaches on how to pull our objectives together in a concrete, physical structure,” he said. “You can interpret a lot of the design elements in different ways that accomplished our goals.”

For students, the exercise reinforces that the work they do might have real-world implications, Pease said. “It’s a good thing for them. They realize that they’re not doing the work just for me, and some self-respect enters into it. They have to rise to a certain level.”

In addition to City Council, the other big user of the Stryker Center is the Williamsburg Regional Library. The gallery space broadens its ability to showcase art and educational exhibits, while the new offices free up space in the main branch. Pease and the rest of his team worked closely with former Library Director Genevieve Owens throughout the process, even down to the details of the building’s finishes, she said. 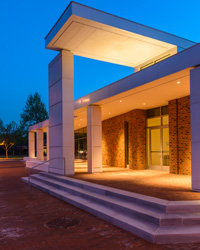 “He eagerly incorporated all of the library’s programmatic needs into the plans while maintaining the clean, open, airy, light-filled aesthetic for which he is so well known,” she said. “He even let me get down in the weeds with him on interior signage. We are thoroughly delighted with the result.”

Not everyone in the community was as supportive though, as evidenced by a number of comments that ran in the local newspaper before the new Stryker opened.

Pease said council members made it clear throughout the process that they preferred a modern architectural style more than a colonial one. Some of the criticism has calmed since the building opened as people visit and see that the materials and design aren’t arbitrary, Pease and Freiling agreed.

“Once you begin to talk about the different areas and why they do what they do, it allows people to think about the building as an experience,” Pease said. “From the beginning, we tried to emphasize that our design was less about what the building looks like and more about how one experiences it. Granted, we do care what the building looks like – I can’t pretend we don’t – but there are reasons it looks the way it does that have to do with its performance and how you use it.”

Freiling said he’s heard from detractors, but counters that there are few examples of great architecture that didn’t generate some criticism.

“One of the challenges of doing something that’s different, innovative and on the edge is that you take some chances, and some people won’t enjoy that,” he said. “In the long term, I believe most people will come around.

“What’s most important in the building is how it serves the functions it was designed to serve,” he said. “What it allows us to do in the quality of our council meetings, the broadcast and the experience of the public who view meetings live, and allows us to do with the gallery space and bringing different types of art and different traveling library exhibitions, and what it does as a community gathering point with all of those meeting rooms – it’s just a great asset.”