William & Mary Art History Professor Charles Palermo about 20 years ago became intrigued with the strange gestures artist Pablo Picasso’s subjects displayed during the Blue and Rose periods and determined to unravel their mystery.

It’s apparent to even a casual observer that Picasso is trying to convey something in what Palermo calls the “inscrutable gestures” of the period, though there is little agreement among art historians about what he was trying to impart.

“I realized that a lot of these paintings had themes drawn more or less directly from traditional Christian iconography,” in some cases mimicking gestures characteristic of paintings from earlier eras, Palermo said.

The revelations form the backbone of his new book, Modernism and Authority: Picasso and His Milieu Around 1900, published in October by University of California Press.

It’s one thing to trace the provenance of the gestures, Palermo said, but another to figure out what Picasso was trying to say in their use. It was even more puzzling given Picasso’s well-known status as a non-believer.

But when Palermo came across the early works of Guillaume Apollinaire, writer and friend to Picasso, insight dawned. In Apollinaire’s short stories from around the same period, particularly in the Heresiarch & Co., Palermo found similar religious themes and treatments.

He found more in other writers and artists of the time – Paul Gauguin, Paul Verlaine, Eugène Carrière, Santiago Rusiñol and Charles Morice. He came to understand the themes as reflective of the time and place in which they were produced – Paris at the turn of the century – and as markers for the advent of a modern sensibility characterized by skepticism toward authority, whether religious or artistic.

Palermo argues that an important but little-remarked fact is that at the turn of the century, Picasso was surrounded by people who, like Apollinaire, were interested in the challenges to authority posed by historical biblical criticism. 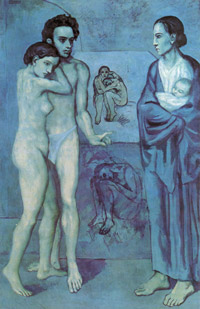 Since the 18th century, critics had questioned the historical authenticity of the Gospels and the miracles recorded in them, he said.

“Because of this, by the middle of the 19th century it was possible to doubt all or most of what was in the Gospels, at least the supernatural content,” he explained. “This understandably shook the foundations of a lot of Protestant thinking.”

By the turn of the 20th century, even the Catholic Church was trying to reconcile the new skepticism with orthodox tradition, Palermo said.

“The people around Picasso were surprisingly interested in this,” he said. “I think Picasso might have been too, non-believer though he was. His early work is another phase in that turn away from an easy relationship to tradition and authority – and therefore also to meaning and conviction – toward something that is more hospitable to a modern mind.

“Modernism is the fall of our shared acceptance of doctrine.”

The gesture is traced back to Christian iconography, Palermo said, most notably to Antonio Allegri da Correggio’s “Noli me tangere,” or “Don’t touch me,” which recounts Christ’s dialogue with Mary Magdalene after the resurrection. The painting, dating to the 1500s, was very much in the tradition of religious artwork depicting biblical stories to inspire devotion among viewers. 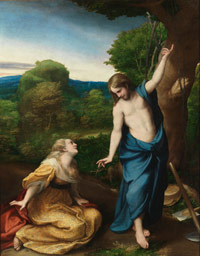 Picasso is doing something else entirely. Unlike Correggio, he is not devoutly depicting Christ’s encounter with Mary Magdalene. After almost 200 years of biblical skepticism, earnestly trying to paint the same kind of biblical scenes would be affected and sentimental, and modern viewers would regard it so, as they came increasingly to view academic painters who continued to produce such traditional imagery.

Recontextualizing the religious gesture in a secular painting places Picasso squarely among the writers and thinkers of his time, who “experienced modernity as a challenge to reflect on a lost or forgotten relation to authority,” Palermo writes.

A modern view of authority

“When one looks at a painting like ‘La Vie,’ one has the feeling of being offered food for reflection,” Palermo writes. “A beholder’s task is to rise to the occasion the painter produces.”

Understanding that thinkers were challenging authority at the turn of the century doesn’t entirely solve the mystery of “La Vie” or the other paintings of Picasso’s Rose and Blue periods, he said.

“None of this adds up to an explanation. None of this tells us what the painting is about,” Palermo said. That’s where the viewer comes in.

Palermo posits that the paintings are designed to invite the viewers to continue the work of interpretation — to keep trying to understand. Picasso points toward tradition with one hand and says, “Don’t trust that,” and points to the viewer with the other, asking, “Do you trust yourself?” Picasso and his compatriots were claiming authority for themselves and questioning that authority at the same time, Palermo said. 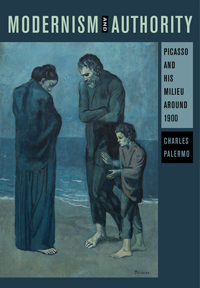 Viewers need not even know that “La Vie’s” gesture originated with a religious painting to still be moved by it, as countless art lovers have been in the 100 years since it was painted.

Palermo likens this to a Protestant who might not trust entirely the historical accuracy of the Gospels, but could still be touched and inspired by their messages.

“This separates the problem of my response to a painting from the historical question of what it’s about or what it represents in something like the way historical biblical criticism led Protestant theology to separate our response to the Gospels from our questions about what they actually mean [historically],” he said.

He explained that art historians tend toward understanding artwork as only fully meaningful within its historical context and the context of its production. Historicism stands in tension with presentism, which allows viewers to assign meaning to the works as they are viewed.

Palermo suggests that beholders need both. A sole reliance on historical context leaves the viewer “somewhat impoverished” in their relationship to art, he said. On the other hand, viewers run the risk of arbitrarily assigning meaning to works if we give them our own meanings.

“I want to find a way – and to discuss this way through my analyses of the works of Picasso, Apollinaire and their associates around the turn of the century – to make both the historical meaning and our response to it reconcilable in a single event of what goes on when I stand in front of that painting,” he said.

By all accounts, he succeeded. As reviewer Lisa Florman, art history professor at Ohio State, stated, “Palermo’s nuanced discussions of individual works reveal a surprising number of parallels with and references to contemporaneous debates within the Catholic Church. If I was initially skeptical of the theological dimension of his project, I have since been converted – such is the marvelous authority of Palermo’s text.”