John Lee’s paintings capture areas of the William & Mary campus that people walk through every day without ever noticing.

A vacant hallway, a shadowy corner, a bathroom door, a couch from the 1970s, an entryway where the sunshine meets industrial lighting all provide inspiration for the art professor, who has done a series of paintings almost exclusively set in Millington and Andrews halls.

“I might just be standing in a little hallway, but I’m looking at how the color moves and takes me along,” he said. “It becomes a whole world of rich color. It’s not something I sat down and said, ‘Well, wouldn’t it be interesting if I were painting some hallways or the doorway to the bathroom?’ This is about something I walk by and just go, ‘Whoa! Look at that,’ and I had to start painting it.”

For that, Lee has gained a reputation among his colleagues for having an eye for the unique.

“John has this remarkable ability to find the luminous in the drabbest of places. Even an old institutional structure can't stop John from unearthing a thriving interior life,” said Elizabeth Mead, chair and Class of 1963 Term Distinguished Associate Professor of Art and Art History.

Lee said that throughout the day, as he winds through the halls to and from his car, he’ll spot dullish shadows that intrigue him. “There’s a luminosity to that I try to get in the paintings, and that’s what draws me in,” he said.

In almost every painting, Lee said, it is a “surprise for color” in the institutional landscape that catches his eye. He’ll often spend weeks on a painting, working to capture an area’s subtle coloration, the texture of its walls and ceilings, its umpteen coats of paint.

He does much of his work in the summer, when there are fewer students and professors in the halls and he has space and privacy enough to paint.

“I think I can find the exotic close to me,” he said. “I would push the cart over to Millington every day with my palette, my easel and so on. So it’s a small journey. I have to fight for it to make some sense. I can’t just be satisfied in one single go. There’s a depth there with the color, and I have to match that with the medium.”

Lee’s portraits of William & Mary were recognized in 2015 by the Charles H. Taylor Arts Center in Hampton when he was awarded Best in Show for the “Artists Who Teach” exhibition.

The art center will host a solo exhibition of his work, “Defeating the Studio,” March 19 through May 1, also including his still life paintings and self-portraits.

Some of his W&M paintings are also included in the Muscarelle Museum of Art's "Faculty Show 13," which runs through Sunday, Jan. 17.

Lee is a second-generation painter and art instructor, sharing his father’s legacy. He originally began at William & Mary in 2008 as a sabbatical replacement, staying to take on a five-year assignment before becoming a full painting professor in 2014. 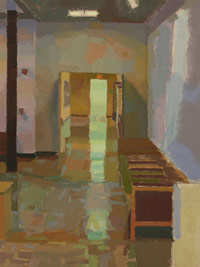 He resists categorizations of his painting style (“I have mixed feeling about the word style, but I know what you mean”) but nods to a colorist tradition.

“[My father] is the one who started me off with a sense of color and seeing the world as a colorist. That’s my first love,” he said. “But I’m also interested in a compositional energy and how the planes move you through the space of the painting. I try to put those two together in my work. But first, it’s always the color that draws me in.”

Planes gained a fair bit of Lee’s attention in the fall of 2015, however, when he curated the “Feast of Planes” exhibition in the Andrews Gallery.

Lee said he’s also part of a group that call themselves perceptual painters.

“It’s an art that’s based on looking,” he said. “What you find when you look, seeing something new in the unexpected, something in the everyday. That corner of the world, that quiet space that gets painted, it’s been looked at for hours and hours, maybe weeks of time. Something is discovered there. You have to put some of that time back into it when you look at it yourself. It’s a nonverbal story – the record of my engagement.

“I hope you look at it and can be excited by some of this color the way I’m excited by it. I want to open people’s eyes to seeing this way. Art, for me, is not about going out and having this grand experience in terms of a storytelling idea. It’s about seeing something that’s already there.”