“Step inside and see the world anew,” promises the silver and weirdly-shaped tiny building behind the Muscarelle Museum of Art at William & Mary.

And it delivers on its promise: a new view of Small Hall, the walkway to Andrews Hall and surrounding landscaping. The structure is a walk-in camera obscura, an ancient phenomenon that presents an image of the world outside.

“What we’re actually doing is standing inside of a camera,” explained Eliot Dudik, visiting assistant professor of photography.

A camera obscura, literally “dark room” in Latin, is simply a dark box or room with a small hole letting in the only light. The light projects an image from the outside world on the opposite wall – upside-down and backward. Anyone who’s used a pinhole camera is familiar with how it works.

For more than a year, Dudik partnered with physics and architecture professors and students on the camera obscura, which celebrates 2015 as the United Nation’s International Year of Light and Light-based Technologies.

The idea germinated during a meeting between Dudik and Associate Physics Professor Irina Novikova on a new COLL 200 optics course Novikova was designing.

“I knew I wanted to have some connection to the arts, and photography is such a natural extension,” she said. “There’s so much optics involved in photography.”

When she mentioned the International Year of Light, Dudik himself lit up, she said.

“The fact it’s a real thing, that’s an unusual motivation for them,” Pease said of his students. “Most of the things they work on are theoretical.”

Dudik visited Pease’s class to explain camera obscura, but it wasn’t until students saw a temporary one he made in an Andrews Hall classroom that they became really excited, Pease said.

Over half of the spring semester, the architecture students went through three or four iterations of their designs, with Dudik coming in to evaluate each round, Pease said.

Among the challenges they had to deal with were the need for ventilation in the light-tight structure and accounting for the heat and humidity of summer.

The finished, hexagonal camera obscura with three apertures and three images is an aggregate of the students’ ideas, particularly owing to two: Grayson Cooke ’15 and Feicen Zhou ’15, Pease said. It was Cooke who came up with the corkscrew entrance, obviating the need for a door, while Zhou envisioned the structure being plated with reflective glass, the precursor to the reflective Mylar on the finished camera obscura.

But first it had to be built. And for that, Dudik turned to Studio Art Technician Michael Draeger, the guy who helps make real the wildest ideas of W&M artists. As such, Draeger is a pragmatist who brought a healthy dose of skepticism to the project. “Everyone’s confidence was probably overinflated,” he admitted. “But the design we went with was manageable. It was the most realistic structure to actually physically build.”

Originally, the group hoped to make the camera obscura portable, so Draeger continually advised on how designs could be broken into sections and which materials would make it portable by hand. It was he who sat down with Dudik to plan the build out, step by step, and to price it.

The Muscarelle Museum of Art, Arts & Sciences,  Film and Media Studies and American Studies programs gave additional support, and the Roy R. Charles Center provided critical funding at the end of the summer. The group rushed to obtain materials and manpower to have the camera obscura ready for Homecoming. 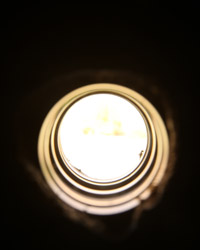 “At first I didn’t think it was going to be possible,” Draeger said. “But Eliot and I sat down one Sunday and knocked out a surprising amount of work in a very short time. After that, we had planned out the steps involved, everything that needed to be built and a chore list for the entire thing.”

They finished the Friday of Homecoming, Dudik said.

Novikova also remained involved throughout the project, helping Dudik to better understand the physics of light and answering questions like what happens if the light from the three apertures intersects in the middle of the room, as it does in the finished project. (Answer: nothing. Light travels in a straight line, so the intersecting paths don’t interfere with one another).

She also helped manage the trade-offs inherent in making a walk-in camera obscura. For a sharp image, the camera obscura would need a small aperture, letting in very little light. Which would mean a long wait time for visitors, who would have to let their eyes adjust.

“One of the things Eliot wanted was to have people walk into the camera obscura and see the images almost immediately,” she explained.

But larger apertures translate to fuzzy images that aren’t as compelling. To resolve the dilemma, Novikova obtained funds from the physics department for three tunable lens assemblies. She fit them into larger apertures but dialed them in so the images remained crisp.

Even before it was finished, Dudik could hear people outside explaining camera obscura to others on campus.

“If it’s the first time somebody’s walked into a camera obscura, I think it’s pretty hard not to be amazed,” he said. “They maintain a place in the world in general because they’re fascinating. It’s an important part of photography education because it opens the students’ mind to what photography is pretty quickly and easily with a simple demonstration. We think of our cameras as very complicated objects, but what’s actually happening in it to create an image is fairly simple and straightforward.”

Novikova said colleagues from the physics department, especially those teaching intro classes, have mentioned taking their classes to see the camera obscura.

“It’s an amazing experience,” she said, “just having something that’s such a merger of science and art, and in some sense, performing art.”

The Muscarelle Museum plans to hold an exhibition in the spring centered around 100 years of photography.