Melissa Commander had a vision for herself and her family that came to fruition when she took the stage at Ewell Hall on Sept. 19.

Commander, a senior at William & Mary majoring in art history and minoring in creative writing, set her sights on winning a Concord Traveling Scholarship during her freshman year. She and her Cuban-born grandmother had long been discussing the older woman’s extraordinary life, something Commander dearly wanted to put to paper. She instinctively concluded that there had to be a way to merge the two.

It happened in May, when Commander learned that she was indeed the recipient of the Concord Traveling Scholarship, which is made possible by a donation from Anne Rivers Gunton ’00 and David L. Gunton ’99. Each spring, Henry Hart, Mildred and J.B. Hickman Professor of English and Humanities, asks for proposals from students who would like to combine summer travel with a writing project. Faculty who teach creative writing evaluate and vote, seeking topics that are well organized and original. All recipients are required to make a presentation based on their travel and writing.

{{youtube:medium:center|sCoU8o-vecU, Melissa Commander in her own words}}

Commander, grandmother Teresa Brandt and six family members traveled to Cuba for 11 days in July, where in large measure they retraced many of the most important steps in the 72-year-old woman’s life. They stayed at the family home of Commander’s great aunt in Guantanamo.

What a story it is. Born into a wealthy family that owned a dairy farm – more like a plantation, Commander said – near Guantanamo, Teresa Salas married a United States Marine when she was 16.

Not long after, two American agents came to her grandmother’s home. They offered her two choices: stay in Cuba and risk losing her life, or immediately get on a bus for Guantanamo Bay Naval Base and fly to the U.S.

“They knew something she didn’t know, that no one in Cuba knew, that the U.S. had broken ties with Cuba,” Commander said. “So it was believed that everything was about to get pretty violent. Because she was married to a U.S. Marine, because her family was wealthy, she was believed to be in danger.”

The Castro government confiscated the dairy farm, which is still in existence today. Commander and her family got close to the property in July, but didn’t step onto it, unsure of the consequences. 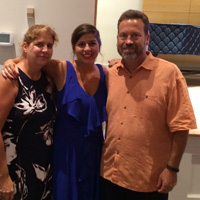 Commander’s grandmother had always shared information about her background, and the trip rekindled memories that enabled her to elaborate on pieces of her life in Cuba.

One day the family drove across a grey, weather-beaten bridge that spanned a dry gulch where the Jaibo River once flowed.

“This is the bridge!” Commander’s grandmother cried out then repeated a story Commander had heard before and had tried to envision.

As children, Salas and her two brothers were attempting to go into the city of Guantanamo one day in 1953 and were using the bridge as a gateway. Soldiers serving in the army under President Fulgencio Batista and guarding the city, seeing them from a distance, somehow mistook them for Castro’s rebels, and opened fire.

“They had to run,” Commander said. “Eventually, the soldiers realized they were just kids and let them pass, and they played in the big river.”

Another time, the family visited the grave of Commander’s great grandmother, who passed away about two years ago. It was the most emotional moment of the trip. 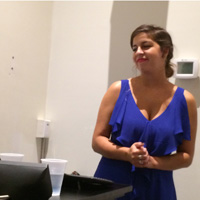 “I think that was the hardest, what touched my grandmother the most, seeing her mother’s grave,” Commander said. “She had been back [to Cuba] a couple of times and seen her, but did not get to see her near the end. That was very emotional.”

Brandt’s life in the United States is testimony to hard work and perseverance. Her marriage ended shortly after she gave birth to her third child. With almost no knowledge of English and desperate to feed her children, she agreed to take on a small sewing job, even though she didn’t know how to thread a needle. Ultimately, she purchased a tailor’s shop and turned it into a highly successful business. Commander made note of it all in her presentation, which she hopes to turn into a book.

“One of the things I've admired and strived for, inspired by my grandmother, is her strength,” Commander said. “She’s an incredibly strong woman. She’s lived through so much and somehow has maintained a level of kindness and generosity that on occasion baffles me. By going there, one thing I saw was how rich a life she had.”

Going there also changed – and enriched – an already close relationship.

“I do feel like we’re a little closer, like we’re two women, I guess,” she said. “She told me some things about her life that she didn’t tell me before, I guess because I was younger and she didn’t want to tell me ... We had conversations that were more two women talking than grandmother-granddaughter talking.”