More than 20 years ago, Hispanic Studies Professor George Greenia discovered a manuscript that a reporter from the Star Tribune in Minneapolis, Minnesota, posited “may be the most significant medieval find in the United States in decades.”

But the bulk of the documents Greenia discovered have remained unstudied since 1994, waiting for qualified scholars to delve into them.

In November, Greenia took two undergraduate Hispanic Studies majors to the Hill Museum & Manuscript Library at St. John’s University in Collegeville, Minnesota, to begin examining some of the more than 50 Spanish manuscripts he and another professor discovered in the 1990s.

The find, quite literally, fell into Greenia’s hands during a 1994 visit to the library, which is generally considered to be the world’s leader in the photographic preservation of manuscripts. While in the rare books vault, Greenia innocently asked about a roll of sheepskin teetering on a top shelf and leapt to bat it down. It turned out to be a legal document relating to a 14th-century Spaniard suing a monastery over a land dispute.

More, it was part of an uncatalogued collection of books and manuscripts dating from the 14th through the 19th centuries pertaining to medieval Iberia and Spain’s possessions in the New World.

Over the next five years, Greenia did some transcribing and publishing of the Steiner Collection, as it’s now known, but much of it has remained uninvestigated.

This semester, he took two students from his class on the Medieval Book to explore the collection. James Sylvester ’17 and Alexandra Wingate ’18 had both obtained Student Research Grants through the Roy R. Charles Center for the trip. 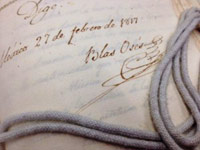 “Students walk away saying, ‘I can actually read this stuff!’” Greenia said.

The class meets in Swem Library’s Special Collections and Greenia uses a wide range of both high-end facsimiles and genuine manuscripts in teaching. In class, students not only read, they write. They practice transcribing the texts themselves, doing three or four exercises over the course of a semester. They make ink from oak galls and cut writing quills from goose feathers. They learn that the best quills come from the left wings of left wings of large birds, because of the way the feathers curve to favor right-handed writers.

Greenia said that William & Mary is rare in teaching undergraduates the skills necessary to read medieval manuscripts. “They can do it,” he said. “You just need somebody to show you how. And you sit there for hours and tease it apart, letter by letter, and you get better.”

Sylvester and Wingate so impressed a senior professor from the University of Colorado Boulder who was also visiting the Hill museum that he later emailed Greenia: “I am totally blown away by the work you have your undergrads doing. Very impressive!”

Sylvester is studying the Leyes de Moros, the law code used to govern Muslim communities in late Reconquest Iberia, as part of his senior honors thesis.

He said he’s long been interested in Islamic culture and has visited Turkey a number of times as well as the Alhambra in Granada during a trip to Spain.

“It was just incredible to see the Islamic influence on Spanish society,” he said. “Even though the Reconquista is seen as [Christians] taking back what was theirs, it’s interesting to me that the Muslim people had been living there for about 800 years before they were united with Christians under this Moorish law code.”

So Sylvester jumped at the chance to study the Leyes de Moros in real life. The copy in Minnesota is one of only three in existence, with the other two in Copenhagen and Stockholm.

The Steiner copy dates back to the late 15th century, when the code was translated into Spanish. Like many Spanish historical documents, however, it was lost sometime in the 1930s during the Spanish Civil War, and remained undiscovered until Greenia found it at the Hill library.

“There’s a lot on marriage,” Sylvester said. “That’s probably about a third of it, including the father’s rule over the household, how others are supposed to treat him and how he’s able to treat others. That part surprised me – just how much there was to it. It was a lot lengthier than I expected.”

Sylvester said most of the Leyes de Moros is in Old Spanish, but also includes words in Latin as well as Arabic. He and Greenia are planning to complete the first-ever English translation.

Wingate, who is a double major in Hispanic studies and linguistics, focused the bulk of her time in the library on a book of miscellany that had been compiled by a certain Blas Osés in the early 1800s. The manuscript is representative of the time when people copied by hand items they wanted to remember and later bound them into books.

Osés’ book is a true miscellany, containing descriptions of war with Apaches, a history of Napoleon, accounts of fires, poems and an ode to Spanish lieutenant general Antonio Gutiérrez de Otero y Santayana after he defeated British Admiral Horatio Nelson at Santa Cruz de Tenerife, among other entries.

Also in Osés’ book is an account of a 1779 voyage from San Blas, Mexico, to points some 5,000 miles up the West Coast to Alaska, with attending descriptions of the native populations. This intrigued Wingate, she said, because of her research interest in colonization and contact linguistics.

Wingate worked on transcribing Osés’ table of contents, even catching a few errors that Greenia had made years before.

“It was my first big-kid, professional research experience,” she said. “I was looking at a manuscript that few scholars have looked at since 1817.”

Outside of Osés’ manuscript, Wingate also gave a cursory review of a nativity play included in the Steiner Collection.

“No one’s every transcribed it,” she said. “We know it’s a nativity play. The description I read was 19th-century. We don’t know who wrote it and we don’t even know what it’s about, other than that it’s about the nativity. The devil is in there, for some reason. So it’s not your standard nativity play.”

Wingate recounted details of the trip on the Student Research Grant blog. She and Sylvester hope to return to Minnesota this summer to continue their work.

“James and I were both super excited to do this,” she said.

The experience has changed the arc of her future plans. She said she originally intended to study general linguistics in graduate school, but now she’s looking for a Hispanic linguistics program that will allow her to pursue her interest in manuscripts.