Being Muslim and Arab American themselves, both Duenya Hassan ’16 and Saif Fiaz ’17 thought they were in for an easy spring semester when they enrolled in “Arabs in America/America in Arabs.”

“I was like, ‘I got this. It’s going to be an easy class,’” said Fiaz, a biology major whose parents are Pakistani. “But I’ve learned a lot. I was surprised.”

Hassan, a government and gender, sexuality and women’s studies major whose parents are Palestinian, echoed Fiaz. “I didn’t think I’d learn as much as I have,” she said. 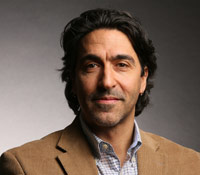 They attribute some of that learning to the style of the class taught by Stephen Sheehi, Sultan Qaboos bin Said Associate Professor of Middle East Studies at William & Mary. In addition to traditional class readings, essays and discussions, students must design and post multimedia blog entries integrating current events and issues with the class materials. The class materials are prescribed, but students can take off in any direction they choose as long as they relate it back to the material.

“They are encouraged to think in terms of multimedia, using written sources, videos, music, to explore what activists – not only intellectuals – are doing,” Sheehi said. “They explore the political conditions affecting the Arab-American experience and how Arab Americans answer those conditions, how they forge their own identities.”

The blog, “Arab American Tribe,” had Hassan and her classmates responding within days to the shooting deaths of a Jordanian couple – both graduate students – and the sister of the wife in Chapel Hill, North Carolina in Feburary. Their post examined the reluctance of the police and media to label the murders as a hate crime, in contrast to Muslims around the world.

“In class we were talking about racial hierarchies within the U.S. and how Arab Americans have had this process, according to Matthew Jacobson, of becoming white,” Hassan said. “The first Christian Arabs were able to assimilate, to integrate, and to receive many of the privileges the majority received. After 9/11, you see this flip. You have discrimination against Arabs, and, at this point, it doesn’t matter if they are Muslim or Christian, because it’s based primarily on physical appearance.

“In looking at this incident, we were trying to understand where Arab Americans fit into this racial hierarchy now, and because the media portrayed this as some lone incident, whether there are sentiments the public has about this issue.” 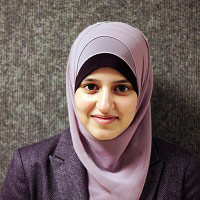 Similarly, Fiaz and his group blogged on the Muslim Blind Trust Experiment, a series of videos in which blindfolded Muslims on city streets challenge passers-by to show trust by hugging them.

The videos are making their rounds on social media, but Fiaz’s group took a more critical look at actual research on social hostilities toward religion as well as government restrictions on religions in different parts of the world. In short, the higher a region’s social hostility toward a particular religion, the higher the likelihood government will move to restrict that religion and its expression.

“It gives us a feel for what’s really happening in the world, as compared to just writing about [the material] or doing a project,” Fiaz said. “Professor Sheehi gave us a lot of creative power and the ability to think bigger than what the class is.”

Fiaz, Hassan and their classmates are also gaining the technical skills needed to run the blog, including collating the information from different members of the group, posting the written material, formatting it and embedding photos, graphs, video and music files.

“I’m a bio science major, so you aren’t usually assigned blogs about organic chemistry,” Fiaz joked. “But it’s very relevant once you leave college. It’s something people expect you to know how to do.”

“I’m used to doing papers all the time,” Hassan said. “This was really different. It helped you think about what you were writing about because you don’t have this structure to rely on where you just plug in the information. You had to think about what you were writing so it made sense in the short amount of space you have. I actually looked up other blogs to see what I should do, because I’ve read a few, but I hadn’t done it before.”

The blog then drives class discussion. Sheehi lectures on Tuesdays. Blog entries have to be posted online Wednesday night before the class talks about them on Thursday, giving presentations and critiquing one another’s work.

“At the core, there are some fundamental skills they are learning,” Sheehi said, “including how to integrate the material they’re learning in looking at the larger picture in the United States. And then how to present it. Technically, you can have great blog material and present it pretty poorly. So how do you present to a class of your peers? How do you synthesize material? How do you unpack the material you wrote?” 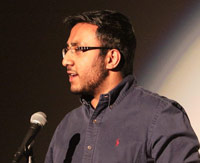 Fiaz said he was surprised at the level of engagement in the class, an Asian and Middle Eastern Studies Program offering. “We have at least 20 people in the class,” he said. “I was expecting maybe 10 or 15. That was one of the most significant things: that our culture – my culture – and the Middle East are more prevalent than I perceived them to be in American culture. We have discussions that go on past the hour and a half we have for class.”

On a personal level, Fiaz said the course has helped affirm his own identity. “I’m surprised how parallel my experiences are with some of the stories we’ve read of first-generation immigrants in class. I like to see that. It makes me feel better about what I’ve gone through, because I feel like I’m not the only one.”

As for Hassan, one of the scholars assigned in the class, Nadine Naber, inspired her to focus her honors thesis on the activism of Palestinian-American women through in-depth profiles.

“I wanted to cover this political landscape, but it was just so broad,” she said. “After reading her piece, it was like, ‘Wow, this piece gets across this bigger issue of Palestinian-American women, their activism in America and how that fits into the global context.’”

In talks with Sheehi, Hassan decided to try to interview either Naber or a Palestinian academic in San Francisco with whom Naber works. Turns out Sheehi knew her and emailed on Hassan’s behalf. The professor agreed to the interview, and now Hassan is trying to procure funds to pursue the project.

“The issues Sheehi brings up, he tries to make you think outside the box,” Hassan said, “just asking those questions that other classes are sometimes afraid to ask or other students are afraid to bring up in another context. When actually you’re in college and this is the best time to raise those questions.”

Sheehi will next teach the course in Washington, D.C., as part of the Washington Office's DC Summer Session. Students will have the opportunity to interact with a number of Arab-American politicians, scholars, artists and activists Sheehi is scheduling. Registration is currently open.