A diverse group of experts from academia, K-12 education, business, government and non-governmental organizations (NGOs) convened for a rare meeting April 11-14 in Williamsburg and charted a course on the national education policy directions needed to address America’s global competence needs for the future.

Two hundred thirty people attended the conference, co-sponsored by William & Mary’s Reves Center for International Studies and the Coalition for International Education. The conference was titled “Internationalization of U.S. Education in the 21st Century: The Future of International and Foreign Language Studies, A Research Conference on National Needs and Policy Implications,” and coincided with the Reves Center’s 25th anniversary. The center promotes study abroad opportunities for students, catalyzes on-campus international, world area and foreign language learning as well as teaching and research on global issues, and supports more than 600 international students and scholars.

The conference was the first comprehensive assessment of education’s role in meeting the nation’s global competence needs since a 2003 conference at Duke University, also sponsored by the Coalition for International Education. The Coalition for International Education is a group of 30 national educational associations that focus on improving U.S. global competence. 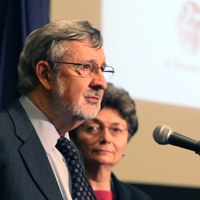 “This isn’t about the budget,” Huntsman continued. “It’s about priorities.”

Stephen E. Hanson, vice provost for international affairs at William & Mary and director of the Reves Center, summarized recommendations from those who attended the conference to formulate policies that would increase the United States’ influence and ability to deal more effectively on international issues.

Most importantly, the participants called for a greater sense of national urgency to the internationalization of education.

The conference discussion outlined the need for increased bipartisanship within the federal government and engaging with foundations for innovation, networking and relationship building. There’s also a need to foster relationships within university and college campuses, including with the professional schools and underrepresented institutions and populations. Allowing K-12 students to experience internationally focused programs early will also be key to developing language fluency and a lifelong interest in culture and world affairs among future generations. Promoting academic areas of study that respond to business needs for international talent would encourage businesses to invest in international education, thus furthering America’s ability to better tackle international issues. 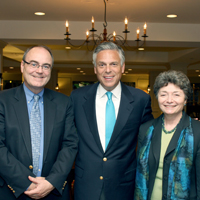 “These collective action problems are formidable,” Hanson said, “but they are not insurmountable.”

In addition to Huntsman, seven other keynote speakers appeared over the weekend. These individuals offered invaluable insight into the global aspects of their industry:

A complete listing of the research papers presented at the conference is available on the Reves Center’s website.

“In order for the United States to remain a leader on the global stage it is critical that our young people have the cultural dexterity to thrive in a world that just grows smaller and smaller and more interconnected,” William & Mary President Taylor Reveley said.