His Royal Highness Prince Turki Al-Faisal of the Kingdom of Saudi Arabia will speak at William & Mary on Tuesday, March 11. 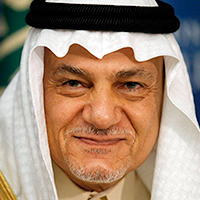 The title of Prince Turki’s open forum will be "Saudi Views on Today's Middle East," which is free and open to the public. Tickets are not required for the event, which takes place in the Sadler Center’s Commonwealth Auditorium from 4 – 5 p.m.

Prince Turki’s visit to the university is part of the 25th anniversary of the founding of the Reves Center for International Studies at William & Mary. The center promotes and supports internationalization and global engagement through study abroad opportunities for students, on-campus learning, teaching and research, and supports more than 600 international students and scholars.

“It is an honor to have Prince Turki Al-Faisal visit our campus and speak with our students, faculty, staff and community,” said Vice Provost for International Affairs and Director of the Reves Center for International Studies Stephen E. Hanson. “Having world class speakers like Prince Turki Al-Faisal helps us to broaden our global understanding, and significantly contributes to the internationalization of our university.”

“We are indeed privileged to host HRH Prince Turki at this critical moment in U.S.-Saudi relations,” said Tamara Sonn, the William R. Kenan, Jr., Distinguished Professor of Humanities and Religious Studies. “We are very much looking forward to hearing Saudi views on developments in the Middle East, particularly on the civil war in Syria and U.S. relations with Iran.”

Prince Turki is a well-known diplomat and commentator on Middle Eastern affairs. He was formerly the director of the Saudi General Intelligence Directorate from 1977 to 2001, was appointed ambassador to the Court of St. James in 2002, and served as ambassador to the U.S. in 2005-2007. He is chairman of the King Faisal Center for Research and Islamic Studies in Riyadh, and co-founder of the King Faisal Foundation. Additionally, the prince is co-chair of the C100 Group, which has been associated with the World Economic Forum for over a decade.