When Jingzhu Zhang ’14 began her Ph.D. program with the Curriculum and Educational Technology (CET) program in the School of Education, she had only a vague idea of the research she would like to conduct, but knew that her experiences as an international student would and should influence her decision.

After speaking with a number of other international students at the School of Education, she realized that many of them struggled with the same three challenges: limited spoken English proficiency, intercultural misunderstandings and social isolation.

A review of existing research confirmed that these are common obstacles for international students studying in the United States.

Zhang reached out to Cortney Cain, coordinator of the Conversation Partner Program, through the Graduate Center, Arts & Sciences. Together they surveyed all international members of the program and the resulting data led to the pilot Virtual Conversation Partners Program (VCPP).

“The VCPP is a peer program that promotes intercultural communicative competence through virtual conversations on Skype,” explained Zhang. “It pairs domestic students from William & Mary with incoming international students. Each pair schedules conversations for one hour per week for three months in the summer, or at least 10 hours of conversation by the end of the summer.” 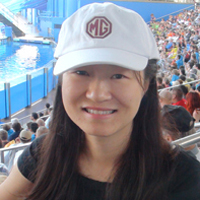 For a variety of William & Mary students, previous experiences living and working abroadled to a desire to participate in the VCPP.

Isra Nikoolkan ’14, a linguistics major at the College, jumped at the chance to participate after a semester studying abroad at Yonsei University, South Korea.

“I had a language exchange partner with whom I had conversations in English while being tutored in Korean,” explained Nikoolkan. “We became great friends over time, learning about each other’s cultures while improving our language abilities. I learned a lot about how to function in South Korea, and she learned much of the life I led in America.”

Similarly, Scott Laws ’13, an international relations major, spent spring 2011 in China and remembered his feelings of disorientation on arrival.

“Luckily while abroad I had some very helpful conversation partners that became some of my best friends,” remarked Laws. “I would like the opportunity to give back.”

Nikoolkan and his partner use their chat sessions to talk about their days, what life is like where each lives and the kinds of things his partner might expect when he arrives in Williamsburg.

“Despite our age differences -- I’m an undergraduate student and he is an incoming graduate student with a wife and child -- we are comfortable talking about many different topics in regards to cultural differences and the observations we may have about each other’s culture,” noted Nikoolkan.

For many of the international students, learning about American culture is just as important as having the opportunity to practice their English language skills.

Amornsri Charuvajana, an incoming Mason School of Business student from Thailand, had already attended an exchange program in America prior to deciding to come to William & Mary. “I have some American and international friends, however I still want to meet new people, get to know them, exchange culture with them and finally become good friends.”

Lori Caruso, an incoming exchange student from Australia, echoed these sentiments. “I hope to gain a bit more insight into American life and culture – especially life as a student at William & Mary.”