Steinberg leads crowd on enthusiastic voyage 'From Plankton to Planet'

The audience put on quite a show during Professor Deborah Steinberg’s Tack Faculty Lecture at the Kimball Theatre in Williamsburg on Tuesday evening.

Donning “anglerfish hats” with glow-in-the-dark “lures,” the capacity crowd of nearly 400 people helped Steinberg recreate the look and feel of bioluminescence in the deep sea, one leg of their virtual voyage “From Plankton to Planet.” They also sampled jellyfish in Chesapeake Bay, dove the sapphire blue waters of the Sargasso Sea, collected lobster larvae from the Amazon plume, and weathered 50-foot waves on their way to Antarctica.

Steinberg’s presentation was the fourth installment of William & Mary’s Tack Faculty Lecture Series, and the first by a professor in W&M’s Virginia Institute of Marine Science. The once-a-semester lectures showcase the work of a W&M scholar or researcher for the rest of the university and the local community. The series is made possible by a generous commitment from Martha '78 and Carl Tack '78, who were in attendance.

After an introduction by Provost Michael Halleran, Steinberg began her lecture with a “plankton primer,” introducing audience members to the drifting plants (phytoplankton) and animals (zooplankton) that play such a key role in ocean food webs and the global carbon cycle.

“There are more copepods than there are mosquitoes in Virginia in the summertime,” said Steinberg, “but most people never see them. I am glad to introduce you to the copepod tonight.”

Steinberg used photos and a video to illustrate the equipment and methods needed to collect copepods and other zooplankton—everything from blue-water SCUBA diving to robotic underwater vehicles and large nets that can be opened and closed electronically at different depths to determine the animals’ distribution.

Steinberg clarified that the science “party” on a research “cruise” actually devotes most of their time to collecting and analyzing samples, noting that she and her students “spend hours sorting plankton—picking little tiny creatures out of buckets. You have to have a lot of patience to do that, because they’re swimming and you’re trying to find them, and the boat is rocking—but we get pretty good at it.” She emphasized that both graduate students from the School of Marine Science at VIMS and undergraduates from the marine science minor and other academic programs at W&M contribute to all aspects of her research. 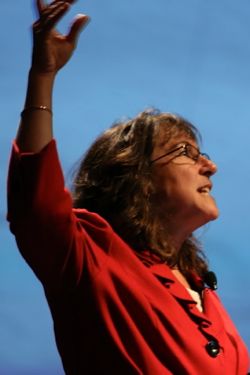 The overall goal of her research, said Steinberg, is to better understand how the activities of countless individual zooplankton—many of them microscopic—can combine to have planetary impacts. She showed satellite images of phytoplankton blooms large enough to be seen from space, and introduced the concept of the “biological pump,” the global process by which zooplankton living in sunlit surface waters transport organic matter to the deep sea.

Steinberg offered two reasons for why it’s important to study how the biological pump operates.

"First," she said, "it’s what feeds the deep sea, where there’s no sunlight, no photosynthesis. All the things that live down there depend on this rain of material that comes from above.” Second, “the pump affects our climate because it ultimately affects the amount of carbon dioxide in the atmosphere. Zooplankton eat the phytoplankton that remove carbon dioxide from the water and air through photosynthesis, and can help transport that carbon into the deep ocean.”

The deeper the carbon goes, Steinberg explained, the longer it takes for it to re-enter the atmosphere as a greenhouse gas—thousands of years for carbon in the deepest waters. But, she also pointed out, only a small amount of surface carbon actually makes it to the bottom, “because there are a lot of hungry mouths waiting to eat it” on the way down and thereby recycle it back into surface waters.

Steinberg’s descriptions of the messier parts of the biological pump touched on topics that any new parent would find familiar — pee, poop, and late-night feedings — drawing ample laughter from the crowd.

“Zooplankton turn some of the organic carbon that was in the phytoplankton back into carbon dioxide,” she explained. “They recycle it through respiration just like we do when we eat a hamburger. They also excrete, or pee. They pee ammonia, which the phytoplankton love. The other thing they do is poop — let’s just get it out in the open—they do. In fact, zooplankton poop is very important in the ocean. Our fancy name for plankton poop is fecal pellet.”

Steinberg’s research shows that fecal pellets from different zooplankton sink at different rates, with important implications for the carbon cycle and climate change. In Antarctica, for instance, krill produce pellets that are small compared to those generated by a type of gelatinous zooplankton called a salp. The krill’s relatively slow-sinking pellets are more likely to be eaten by other creatures, thus recycling their carbon back into surface food webs, while salp pellets can quickly carry carbon away from the atmosphere into deep water.

Since salps prefer the warmer and increasingly ice-free conditions now prevalent along the Antarctic Peninsula where Steinberg works as part of the U.S. Palmer Long-Term Ecological Research Program, their growing numbers will likely prime the biological pump in the region to remove increasing amounts of carbon dioxide from the water and air. That’s the good news. The bad news, said Steinberg, is that salps are “essentially large bags of water” that provide little nutrition. If they replace the ice-dependent and more nutritious krill, ripples could move up the food web, impacting penguins and whales. The peninsula’s population of Adélie penguins, for instance, has decreased by almost 80% since record taking began in the mid 1970s, due to a number of factors related to warming and ice decrease, and possibly a change in their diet.

Steinberg also touched on vertical migration—a global phenomenon in which zooplankton rise to feed in surface waters at night before retreating hundreds of meters to the cover of deeper, perpetually dark waters each morning. She noted that this process can also help speed the transport of carbon, as the downward migration gives fecal pellets a head start on their journey to the abyss.

Despite the rigors of research in the ocean’s far corners—brought home to audience members through videos of the weeklong journey from Virginia to Antarctica and a seasick-marred crossing of the Drake Passage along the way—it was clear to all in attendance that Steinberg loves her job.

In response to one of many questions from audience members following the talk, Steinberg said her passion for all things plankton began in elementary school, when she looked under a microscope and first “saw what was in a drop of water” taken from a nearby creek.

That childhood wonder has now grown into a 25-year career in biological oceanography in which Steinberg has published more than 75 research articles; mentored scores of students at the graduate, undergraduate, and high-school level; earned 18 federal research grants worth more than $6 million; and collectively spent more than a year and a half at sea.

Recognition for her accomplishments includes a Distinguished Professorship from W&M, the Dean’s Prize for Advancement of Women in Marine Science from VIMS, the Sverdrup Award lecture from the Ocean Sciences section of the 62,000-member American Geophysical Union, and numerous leadership positions within scientific societies.

Steinberg’s continuing passion for marine life of all kinds was made clear when she dimmed the lights near the end of her talk and asked audience members to don one of almost 400 handmade anglerfish hats—a fun way to simulate the bioluminescence used by many deep-sea creatures for feeding and reproduction.

Looking out over the sea of bobbing, softly glowing orbs, Steinberg’s enthusiasm was contagious.

“It looks so great from up here!” she exclaimed. “This is amazingly similar to what it actually looks like in the deep sea—where the only source of light is from bioluminescence. Just don’t eat anybody!”

One of Steinberg’s take-home messages was simply that “plankton are amazing.” She stressed that the people she works with are amazing too, and a favorite part of her job.

“These large interdisciplinary cruises are really group efforts. The science party is made up of researchers from around the U.S. and the world. That’s something that’s really a lot of fun about this profession—we get to interact with people from all around the world and go on these exciting research expeditions with them.”

Steinberg will next return to Antarctic waters in December of 2014, with expeditions to other frontiers in the works.