Armed with his tousled wig, bountiful box of donuts and distinctly fervent enthusiasm, Associate Professor of Chemistry Doug Young bore the attire of Buddy the Elf as he claimed his hard-fought victory for the natural and computational sciences at William & Mary’s annual Raft Debate. After a series of spirited presentations from professors, featuring everything from combusting balloons to student-body-guards, the impassioned crowd of Sadler Center’s Commonwealth Auditorium granted Young freedom from his island isolation.

Students, faculty and community members gathered on March 15 to witness the ultimate battle of wits: Three professors, representing their individual disciplines, found themselves stranded on a remote island after an imaginary shipwreck. With only a small escape raft to support one professor’s escape, each competitor had to convince a cheering audience why their discipline merited the surviving slot on the raft.

{{youtube:medium:left|nrIxlkNLBSk, Highlights from the 2018 Raft Debate}}

The Raft Debate, one of William & Mary’s most treasured traditions, was first instituted in the 1960s. After its brief disappearance in the 1980s, the Graduate Center, the Arts & Sciences Office of Graduate Studies and Research and the Arts & Sciences Graduate Student Association collaborated to revive the brutal battle of academic disciplines in 2002. Although historically held in the fall, the event was moved to the spring this year in order to coincide with the Graduate Research Symposium.

The 2018 debate featured a panel of fierce castaway competitors: Associate History Professor Fabricio Prado, representing the humanities; Assistant Professor of Government Jaime Settle, speaking for the social sciences; and Associate Professor of Chemistry Doug Young, championing the natural and computational sciences. Opposing all of the disciplines was Associate Professor of Computer Science Pieter Peers as the Devil’s Advocate. Judge Virginia Torczon, dean of graduate studies and research for Arts & Science, had the challenging task of keeping the competitors in line as the debate got heated – even with actual flames, thanks to Young’s scientific demonstrations.

The brutal opening round

The debate began with seven-minute opening statements from each representative. Clad in dark garb, a black top hat and the goggles of an explorer, Prado commanded the stage with his first words.

“It’s an honor to try to save humanity by saving the humanities,” he remarked.

He began with a demonstration on an electronic synthesizer, illustrating how the sounds of the machine turn into music only with human touch. Throughout his speech, Prado highlighted the pitfalls of his opponents, maintaining that technology can be recreated, but history, identity and culture cannot. 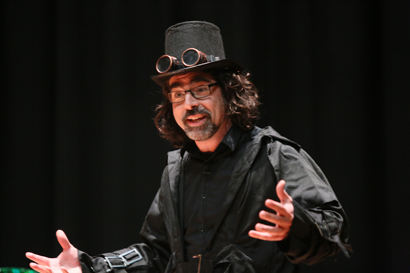 “We have to keep the spirit, we need to keep our ethics, and above all, we need to know where we came from,” he said.

Assuming the persona of a political candidate, accompanied by her earpiece, sunglasses and suit-wearing student bodyguard, Settle began her address by adorning her head with a red cap that read, “Make Data Great Again.” Her argument called attention to the structure of debate; she claimed that the institutional framework of the competition was “democracy in action, an example of channeling the will of the people.” 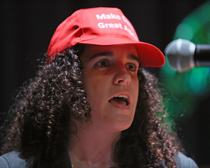 “We as candidates stand here to represent our parties,” she said.

“Or maybe,” she added, “it’s just professors haphazardly selected to represent their disciplines.”

Settle demonstrated the importance of social science by walking through the design of the raft debate and examining the trustworthiness of the system. Students dressed as the Voter Fraud Commission circulated the audience as she attempted to inflate the debate’s democratic qualities.

Whispers from her bodyguard interrupted her.

“OK. So it turns out, the raft debate is entirely about your identity and affiliation,” she said. “Let’s hear it if you’re a social scientist!”

Undeterred by his opponents’ striking presentations, Young stepped forward to begin his resolute defense of the natural and computation sciences. Outfitted in a lab coat and goggles, he started his presentation by igniting a flame and popping a balloon.

“I just created water from fire!” he said. “That is the power of science!” 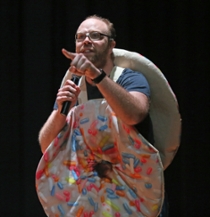 Playing to his young audience, he presented D.J. Khaled’s “major keys” of science’s significance, expressing that science is foundational. Science, he argued, is a necessary basis for partnership with other disciplines and represents the key to civilization.

Young concluded his presentation with his most effective argument: “The best thing that science gave us ... was donuts.”

Sliding into a donut costume, Young opened a box and began throwing bags amongst the ecstatic audience.

After the crowd calmed, Peers was next up in his attempt to encourage the crowd that no discipline deserved a slot on the raft. He demanded that the audience exercise skepticism about the circumstances that placed his three competitors on a stranded island.

“Last time we dumped people who did bad things on an island,” he said, “we ended up with Australia.”

Rebuttals and the vote 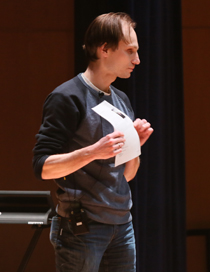 After a close opening round, the heightened stakes of the rebuttal arguments were exhibited with intensified energy and even grander demonstrations.

Prado played the unmusical sounds of his machine, claiming that his opponents’ arguments were mere noise. Settle illustrated the superiority of political sciences by breaking down how each other discipline would fail to tackle an issue like fake news. Young brought his flashiest performance for his final defense of the sciences, employing liquid nitrogen, memes, a Buddy the Elf costume and even more donuts.

Torczon quieted the audience in preparation for the voting procedure. Her explanation was simple, the discipline that received the most screams would win the raft.

After a few ear-piercing minutes and the inevitable loss of voices, the winner was clear. Young jumped in the raft with pride and conviction, claiming a challenging win for the discipline of natural and computational sciences.