“You can read so much from an oral history,” said Bolt. “The inflection in someone’s voice, hearing them get choked up at a certain point in their story, seeing their facial expressions as they react to certain questions or recall certain memories. That alone tells you so much more than a paper document can tell you.”

To learn more about the untold stories of African Americans and women at the university, Bolt has been interviewing W&M alumni, faculty and staff, as well as members of the Williamsburg community. She hopes that people will be encouraged to talk about both the positive and difficult moments they have experienced during their time at the university. 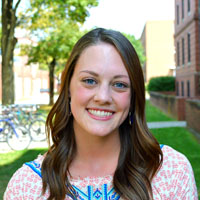 “Sometimes people think that their story isn’t exceptional,” Bolt said, “but everyone’s story is unique. Your story is a piece of the puzzle; it is not complete without your story.”

While uncovering the candid stories of these difficult, darker histories, Bolt still finds herself inspired by the people she interviews. Recalling the story of Sybil Shainwald, a student who came to W&M in the 1940s, Bolt admiringly talked about Shainwald’s contributions and commitment to advancing women’s rights.

“Her time here [at W&M] was not entirely smooth, as she spent her early years frustrated with the segregation she found here,” Bolt acknowledged. “But that experience spurred her to be a force in the world for change. She went on to become an incredibly successful lawyer and won major cases representing women all around the world. To this day, she is still giving speeches and advocating for women’s rights.”

Another of Bolt’s many interviewees was Warren W. Buck III, a W&M alumnus who earned his master’s degree in 1970 and Ph.D. in 1976 in theoretical physics. As a graduate student, Buck was the founding president of the Black Students Organization. In 2013 the university awarded him an honorary Doctor of Science degree, and in 2016 he was appointed to the Board of Visitors.

Buck became involved with the 50th anniversary project as a way to celebrate the three women who became the first African Americans to live on campus, Lynn Briley ‘71, Janet Brown Strafer ‘71 and Karen Ely ’71. Buck arrived the year after them and knew them during those early years.

“It is a critically important project recognizing those three pioneer black women who were the first to live on campus,” Buck said. “I shared with Carmen some memories of what it was like for me being on campus during 1968-70. Calling President Paschal a bigot to his face and years later having reconciliation with each other was one of the memories. I enjoyed sharing the memories - even those that were painful.”

By sharing his memories with Carmen, he hopes that members of the W&M community learn from his experiences.

“Many times it seems that we see the result of a bold effort, but we don’t really know or understand those efforts,” said Buck. “Making the sacrifice of one’s time, energy, and well-being to support others is very noble, yet the underlying reasons for the effort is the least understood.”

Working alongside the digital services team, the oral history program is planning to launch a website to make all oral history projects conducted at W&M easily accessible. Regarding future projects, Bolt said her personal focus is on the stories of marginalized groups who often go unheard. She also emphasized that many oral history projects are ongoing, and she expects to continue the anniversary projects in the years to come.

“Those stories don’t end just because the official anniversaries do,” said Bolt. “The opportunities are endless. There are so many different avenues that oral history can go down.”

In addition to oral history projects, W&M Libraries is planning a number of exhibits to celebrate the anniversaries. Currently, an exhibit featuring oral histories of the first African African-American students in residence is located in Swem Library’s lobby. This exhibit is adjacent to the new mural, “Lemonade: A Picture of America,” installed in August to kick off the anniversary celebrations. An exhibit spotlighting faculty work in the Africana Studies department will also be on display in the Swem lobby in the coming months.

To celebrate the 100th anniversary of co-education in 2018, an exhibit featuring the oral history project will go on display in the Swem lobby next year, followed by an exhibit highlighting the Gender, Sexuality, and Women’s Studies department. The first floor of Swem will also host an exhibit for the 100th in the fall of 2018. Additionally, an exhibit featuring women in athletics will be open for viewing in William & Mary Hall.