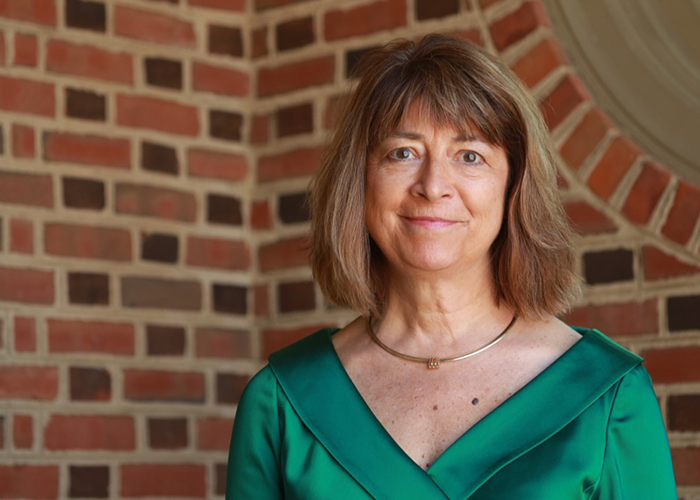 William & Mary announced today it will take a significant step forward in building, sustaining and reinterpreting its historical and cultural resources under a new Office of Strategic Cultural Partnerships, to be led by long-time university community member Ann Marie Stock.

Stock will serve as Presidential Liaison for Strategic Cultural Partnerships and oversee research and various operations of the Williamsburg Bray School initiative, the Muscarelle Museum of Art, William & Mary's Highland, the partnership with the Omohundro Institute of Early American History & Culture and future collaborations with Colonial Williamsburg and other regional and national partners.

“This is really a new strategic direction for the university and I am thrilled about the opportunity to shape and guide an initiative that has so much potential for our institution, our partners in the region and our nation,” said Stock, who most recently served as the university’s Vice Provost for Academic & Faculty Affairs.

Stock joined William & Mary’s faculty in Modern Languages & Literatures in 1993. Since then, she has served in a variety of leadership positions at the university, including acting dean of International Affairs and director of the Reves Center for International Studies, director of programs in Hispanic Studies, Film and Media Studies and Latin American Studies, and director of the New Media Summer Institute in Washington D.C. As the inaugural W&M Libraries Faculty Scholar, she led the creation of the digital humanities Cuba Media Project, an open-access repository, and helped create opportunities for faculty across the institution.

Her teaching and research have earned her recognition as a Fulbright Scholar and a grantee from the MacArthur Foundation, Rockefeller Foundation, and the National Endowment for the Humanities, among others.

“Throughout her entire career, Dr. Stock has explored questions of culture and representation, and has put her findings into practice in collaboration with archivists, artists, educators, and other scholars around the world,” said William & Mary President Katherine A. Rowe. “I know she will be exceptional in leading the university into stronger partnerships with the extraordinary cultural institutions in our region.”

The position will require a broad set of skills as the Office of Strategic Cultural Partnerships will be responsible for fundraising, media relations and other efforts to advance strategic goals, enhance visibility and ensure sustainability of William & Mary’s cultural projects and programs.

“Ann Marie has an extraordinary talent and energy for uniting people and ideas,” said W&M Provost Peggy Agouris. “With her deep ties to our broader communities and her commitment to bringing together a diversity of voices and institutions, this is a natural next step for her.”

In her new role, Stock will work closely with Cliff Fleet, president of The Colonial Williamsburg Foundation who serves as a faculty member at William & Mary’s Mason School of Business, earned his bachelor’s, master’s, M.B.A. and J.D. from William & Mary and is on the board of trustees for the William & Mary Foundation.

“The work of Colonial Williamsburg and that of William & Mary complement each other in many ways,” said Fleet. “We both conduct research, teach and engage the public, and we have much important work to do together over the coming years. I’m so grateful to have Dr. Stock at the helm of this new initiative that will capitalize on our institutions’ individual strengths. She is a connector of people and ideas, and she will find opportunities to move both institutions forward as we develop new ways to engage our audiences and share a more complete story of our nation’s history,”

In the position, Stock will oversee William & Mary’s existing cultural assets and partnerships and work to integrate them into a broader constellation of partner sites and institutions within the region and beyond.

“I see this as a way to get greater visibility for the fantastic programming we already have, and highlight the important teaching, learning and research that’s currently taking place,” said Stock. “We will also work to garner additional resources, so we can do more of this important work and make an even greater impact. A key part of that work is to tell a more complete story of William & Mary's history and the nation's history, a story that encompasses voices and visions that have been left out.”

Currently, the office will oversee The Bray School Initiative, a joint effort with Colonial Williamsburg to understand the history and surviving legacy of an 18th-century building discovered on W&M’s campus that is likely America’s oldest extant schoolhouse for free and enslaved African Americans. The office will also manage the research portfolio at William & Mary’s Highland, the home of W&M alumnus and fifth U.S. President James Monroe, and supervise the university’s Muscarelle Museum of Art and W&M’s relationship with the Omohundo Institute.

This comes as the Omohundro Institute prepares to bring on a new executive director with the departure of Karin Wulf, who led the OI for eight years, preceded by a decade as book review editor of the William and Mary Quarterly, the leading scholarly journal in the field of early American history broadly understood. Wulf will begin as director and librarian of the John Carter Brown Library at Brown University on Oct. 15. Catherine Kelly, currently the OI’s editor of books, will assume the role of interim director while the search is underway.

“Karin has guided the Omohundro in important new directions,” said Stock, who currently serves on the Institute’s board of directors. “She has expanded the scope of the research and has engaged an increasingly diverse range of perspectives. The Institute’s digital presence has also increased dramatically. I speak for the entire university when I express deep gratitude for Karin’s efforts.”

As part of her role, Stock will be responsible for guiding and shepherding the university's programming toward 2026, the 250th anniversary of the nation’s founding. She will be tasked with developing new collaborations and new programs to support scholars and scholarship tied to the commemoration.

“We play a unique role at William & Mary in this early emerging philosophy and practice of democracy,” Stock said. “It was imperfect at the time and remains imperfect today, but we're still striving to enhance it. With this work, we have the potential to expand our thinking, reflecting on the past with much greater nuance, and in doing so foster a deeper understanding of our nation, our relationships to one another, and ourselves.”