William & Mary will open a second entrepreneurship hub for students in Tribe Square next fall. Launchpad, the region’s business incubator for the City of Williamsburg, James City County and York County, also will relocate to the mixed-use property on Richmond Road and enter into a management agreement with the university.

This university hub will be supported by the existing Alan B. Miller Entrepreneurship Center at the Raymond A. Mason School of Business and will offer students programming, co-working space, makerspace access, networking opportunities, mentorship and additional support as they pursue not just business start-ups, but entrepreneurial projects and ways of thinking across disciplines. Launchpad will work in conjunction with the hub with W&M managing staffing and programming for the incubator.

“Entrepreneurial thinking will be our emphasis in this space — collaboration, creative thinking and judicious risk-taking — capacities that William & Mary students hone as they prepare to become change agents in any number of arenas,” said W&M President Katherine A. Rowe. “Prominently located in Tribe Square, the new hub will cultivate a culture of disciplined creativity across the university and with our regional partners.”

The hub will be located on the ground floor of Tribe Square across the open-air walkway from Chick-fil-A, which opened last fall. Funding for the renovation of the hub will come in large part from the President's Strategic Investment Fund, which was created last summer with a $1.5 million gift from an anonymous alumna. Launchpad will move into the space behind Chick-fil-A. The second and third floors of the building will remain as residential space for W&M students. 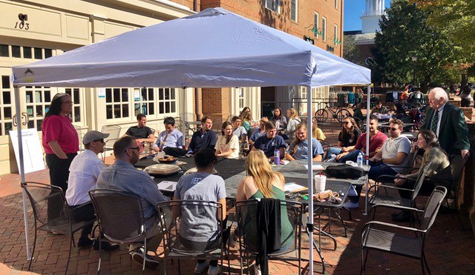 The centralized location of the hub is expected to help attract students from across campus and make the Miller Center’s successful offerings more accessible to all those who want to develop an entrepreneurial mindset and related skills.

The close proximity to the Launchpad is expected to help students and local entrepreneurs work more closely with one another, benefiting both groups.

“Our strong belief is that if we can equip students with that ability to think and act like entrepreneurs, regardless of what they end up doing, they’re going to be more valuable and in demand,” said Graham Henshaw, executive director of the Miller Center.

The idea for the hub grew out of conversations within the university and with regional partners. William & Mary has seen rapid success with its Miller Entrepreneurship Center, which is named after successful hospital entrepreneur and W&M alumnus Alan B. Miller ’58 and focuses on educating, inspiring and supporting students in developing the skills and mindset of an entrepreneur, Henshaw said.

Opened in 2010 through a generous investment from Miller and other partners, it was originally business-focused and curriculum-based, with 100 percent of its members coming from W&M’s business school. The current iteration of the center opened on the third floor of business school in 2016, and its programming is open to all students on campus who wish to become members. 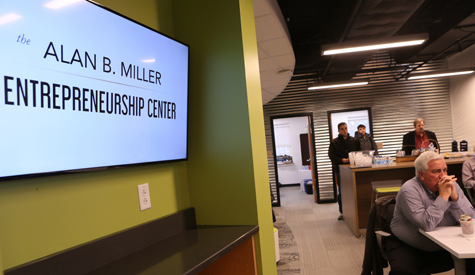 Today, the center is overflowing its current capacity. It has more than 300 student members from a variety of majors, with half of the students coming from the business school and half coming from other areas of study, including computer science, international relations and beyond. Nearly half of the students (46 percent) are women, and the members represent all four undergraduate class years as well as multiple graduate programs.

“We have great programming. We have great resources,” said Henshaw. “But the students actually make this thing come alive. All of our members who come from across campus just make everything better. I just think that diversity of thought makes the programming and the outcomes more interesting.”

With the center a success, Henshaw looked for ways to “scale up” its operations, and a confluence of perfectly timed factors supported the creation of a hub. One of those factors was the progress of an engineering and design initiative at W&M, which began when an ad hoc committee explored ways in which tools and methods of engineering and design thinking could be incorporated into the W&M curriculum.

Vice Provost for Research Dennis Manos and Professor of Business James R. Bradley, co-chairs of that committee, wrote a white paper that offered a series of suggestions under five pillars, one of which was business and entrepreneurship.

The effort has thus far resulted in the establishment of makerspaces, a data science program and an engineering, physics and applied design (EPAD) program at the university. Next year, the business school is launching an innovation and entrepreneurship minor in conjunction with the engineering initiative and involving four departments outside of the business school.

Some of the other perfectly timed factors included the arrival last year of Rowe — who is particularly interested in innovation and is an entrepreneur herself — and the Launchpad’s desire to scale up its own operations and its partnership with W&M.

“We’ve been doing shared programming for a while where we mix entrepreneurs with students, and there’s been a recognition that we could take that even further,” said Henshaw. “One of the greatest assets we have at the Miller Center are our mentors, some alumni and executive partners. … We can make that resource available to Launchpad clients, too, to help those ventures grow.” 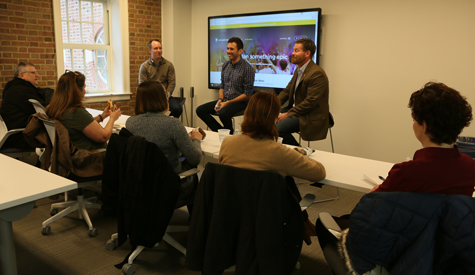 The availability of Tribe Square was also perfectly timed, and Henshaw was thrilled that the Real Estate Foundation saw the vision for the hub as synergistic with its own mission to create a high-quality campus environment for students.

“You can think about that narrowly by saying what kind of retail operations do they attract into spaces, or more broadly, as they’ve done here, about what else you could do to create a vibrant scene for students,” said Henshaw. “I just give them a lot of credit in seeing that housing an entrepreneurial hub would actually help them achieve their mission, as well.”

Although other institutions of higher education have entrepreneurship hubs, Henshaw says that William & Mary’s focus on entrepreneurial thinking — not just start-ups — sets it apart.

“But I think our student body gives us the biggest differentiation. … They are teed up perfectly for this idea to think and act like entrepreneurs, just given the types of students we see,” he said. “They’ve been able to see the benefit of that kind of thinking pretty quickly and apply it in a variety of different ways.”

Faculty will have a role in the hub in guiding students through details they may not have considered, such as legal ramifications and brand management, said Manos. And the university’s liberal arts focus will help students consider the big questions around their ideas, including the ethical considerations. But the liberal arts alone aren’t sufficient if they can’t be turned into solutions to the world’s toughest problems, said Manos.

“That’s where we’re putting a capital E and capital T into that STEM equation and where our liberal arts enterprise is perfect for guiding,” said Manos.

“Why William & Mary got into the game is because we are precisely who needs to be in that game, and Tribe Square is going to be part of that.”

While plans for the hub’s spaces and offerings are still being finalized, the big picture is clear, said Henshaw.

“There’s a really awesome opportunity to make a big impact on campus, and I think it will be measured not by the number of startups, but it would be measured by the collective, entrepreneurial thinking of the campus,” he said.

Work is now underway to finalize plans for the hub’s offerings as well as the design of its space, which will quadruple the current space the Miller Center occupies.

The university’s technology transfer office, which helps faculty members commercialize the technologies they develop, is also involved in planning for the hub, looking for ways to support what may spring from its entrepreneurs.

“All of these things coming together just make it a slam dunk opportunity to make a really big impact not only in the William & Mary community, but I think in this region for entrepreneurship,” Henshaw said. “I’m just thankful to be a part of it.”