Debate is a staple of collegiate education, with professors often facilitating debates among students. But one night each year at William & Mary, the tables are turned. Professors are pitted against one another in the annual Raft Debate to decide which academic discipline must be saved for the sake of humanity.

Students, faculty, staff and members of the community flooded the Chesapeake rooms in the Sadler Center on March 14 to watch the most recent of these debates as three professors, deserted on an imaginary island, represented their disciplines in an battle for a single spot on an imaginary raft. But at the end of the night, it remained empty as the devil's advocate, Provost Michael R. Halleran, won his case.

{{youtube:medium|BTHBQxqBIZk, Scenes from the 2019 Raft Debate}} 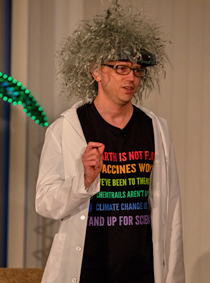 But these professors were not simply battling against one another. As the devil’s advocate, Halleran argued that none of the disciplines, in fact, should be saved.

Under the rules set by the judge, Virginia Torczon, dean of graduate studies and research, the motley crew of academic professionals were each given seven minutes of argument, three minutes of rebuttal, and time to respond to questions from the audience.

Lopresti started the evening off. Donning a two-piece money suit, he explained how the social sciences are about caring about people, not things or abstract concepts — a pointed jab at his opponents. 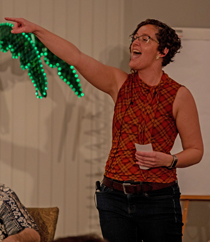 LaMar came next, immediately one-upping Lopresti’s use of props (menus) by throwing around stuffed toy versions of a measles disease. He tossed tiny, fluffy “vaccine” plush toys and gave a vivid example of how herd immunity works.

“From the hands of death, I will give you vaccines,” he said in reference to his papier-mâché skeleton hands filled with the plush toys. He firmly disproved common scientific myths around such topics as the shape of the earth, effectiveness of vaccines and existence of climate change.

“The natural sciences are under attack,” he said.

LaMar continued by calling out the social science’s fabrication of governing bodies that simply do not exist in nature. He finished his point by bringing his two young daughters on stage to throw whipped cream pies in his face. 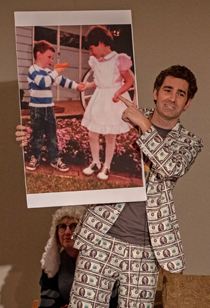 Blazer’s contagious excitement seemed akin to a cheerleading competition as she shouted, “When I say critical, you say thinking! When I say historical, you say context!”

She explained the interdisciplinary nature of the humanities and gave a detailed history of raft debates. She even counted the number of times each discipline has won a debate; overwhelmingly, the devil’s advocate has succeeded. The social sciences and humanities have been the underdogs, only holding two-to-four wins between them.

She then continued by equating the Raft Debate to the popular reality competition television show “Survivor” and claimed a popular variation on the well-known tagline from the show: “I’m here to make friends.”

By appealing to the soft sides of both the audience and her opponents, Blazer tried to exemplify the “inherent dignity and worth” of each person in each discipline in order to win over the spectators.

That is, until Halleran stepped up to the podium. By critiquing every discipline and pointing out their flaws — even through use of limerick — he quickly took apart each discipline’s merits in a hilarious manner.

In final attempts to appeal to the audience, each professor told funny stories, spoke of teamwork and the most important contributions their departments have made, and more. Halleran stepped up as the final speaker with a plush hedgehog named Hedgy, begging the audience to consider working together and allowing not Halleran, but Hedgy, onto the raft. 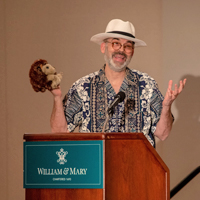 Through the use of a volume meter, Torczon measured the audience approval of each professor. Cheering, clapping and stomping raucously filled Chesapeake and all of Sadler. However, Halleran stepped up from his chair and encouraged the audience to cheer for him, tipping the scale of the meter in his favor.