Molly Mitchell of William & Mary’s Virginia Institute of Marine Science has earned an Early Career Leadership Award from the US CLIVAR Program for her efforts to develop and share sea-level forecasts and other planning tools with coastal risk managers and emergency responders in Virginia and the mid-Atlantic region.

CLIVAR — for Climate Variability and Predictability — is the U.S. component of the International CLIVAR Program, one of the four core projects of the United Nations’ World Climate Research Programme. US CLIVAR research is supported by five federal agencies: NASA, NOAA, the National Science Foundation, the Department of Energy and the Office of Naval Research. 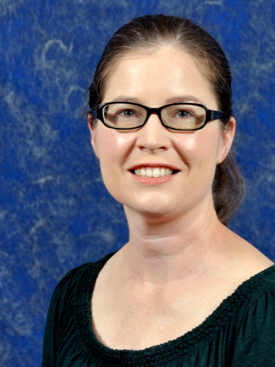 Mitchell is one of only nine scientists nationwide to receive the prestigious award, which will be presented this Thursday during a Town Hall hosted by US CLIVAR as part of the annual meeting of the American Geophysical Union in San Francisco. The meeting is the largest gathering of Earth and space scientists in the world, with more than 28,000 attendees in 2018.

Carl Hershner, Mitchell’s supervisor as director of the Center for Coastal Resources Management at VIMS, says, “It’s nice to know that people at the highest levels of this field recognize the excellence that Molly brings to her work, and the promise she holds for future contributions. It’s an acknowledgment both of the work Molly has already done, and is poised to do.”

Mitchell says, “I’m honored to receive this recognition. The uncertainty of the magnitude and rate of sea level rise makes it difficult to incorporate into planning and can affect our understanding of how to best manage our natural resources and human landscapes. My work tries to place reasonable limits on the uncertainty and convey this information in a way that can feed into a decision-making framework. I enjoy the opportunity to work with scientists, planners, and managers throughout the Chesapeake Bay to achieve a more resilient future.”

Mike Patterson, director of the US CLIVAR Project Office, congratulated Mitchell on her “outstanding leadership of community collaborations to advance science in climate variability and predictability.”

In addition to Adapt Virginia, Mitchell has played a key role in developing and maintaining VIMS’ Sea-Level Report Cards. Updated by Mitchell and colleagues each year as annual tide-gauge data become available, these interactive online charts display recent sea-level trends and project sea-level height to the year 2050 for 32 localities along the U.S. East, Gulf, and West coasts. She also recently began to consider generating a sea-level report card for Venice, Italy based on the increasing vulnerability of this World Heritage city.

Mitchell was also lead author of VIMS’ 2013 report to the General Assembly on recurrent flooding in Tidewater Virginia, and in 2015 visited Capitol Hill to brief congressional staffers and other concerned parties about the nation’s coastal flood risk.

Mitchell earned her undergraduate degree in Biology and Environmental Science from William & Mary in 1999, and both her M.S. in 2003 and Ph.D. in 2018 from W&M’s School of Marine Science at VIMS. Her overall research focuses on understanding, predicting, and responding to shifts in coastal resources due to the interaction between sea-level rise and human-driven modifications to the shoreline.

“Changes in shoreline resources depend both on physical processes like sea-level rise and the way in which humans react,” says Mitchell. “When people stabilize a shoreline, build floodwalls or use other coastal-adaptation strategies, they change the physical characteristics of the system and affect its ecology. By understanding these interactions, I hope to improve our ability to forecast and enhance the future of our coastal resources.” 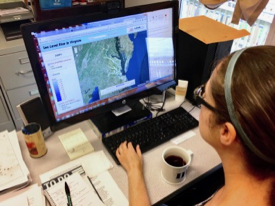 Mitchell says her research is meant to be applied by planners on all levels, from local to federal, and across many different coastal resources, from marshes to roads and buildings. “I work with representatives from many different groups to help translate research and current scientific understanding into practical recommendations,” she says.

Other projects in which Mitchell is currently involved include an effort to increase the sustainability and ecological function of Chesapeake Bay shorescapes via better-informed management decisions; enhancing the adaptive capacity of Virginia coastal wetlands to lessen their vulnerability to climate change; developing strategies to improve conservation of Virginia’s headwater wetlands in the face of climate change; and using created marshes to reduce watershed pollution.