Multi-institutional team will use knowledge gained to advise coastal managers

A team co-led by Associate Professor Christopher Hein of William & Mary’s Virginia Institute of Marine Science has won a three-year, $687,850 federal grant to study how natural and constructed dunes respond when impacted by coastal storms and rising seas. Their goal is to provide resource managers with knowledge and tools to help make the U.S. coastline more resilient.

The grant is one of six awarded nationwide by NOAA’s National Centers for Coastal Ocean Science, with an anticipated total of $4.4 million distributed during the next 3 years. More than 30 organizations will use the funds to study how natural, artificial, and restored coastal habitats could reduce the effects of storms, flooding, and sea-level rise. Hurricanes cost U.S. mainland communities nearly $50 billion in losses in 2018 alone. 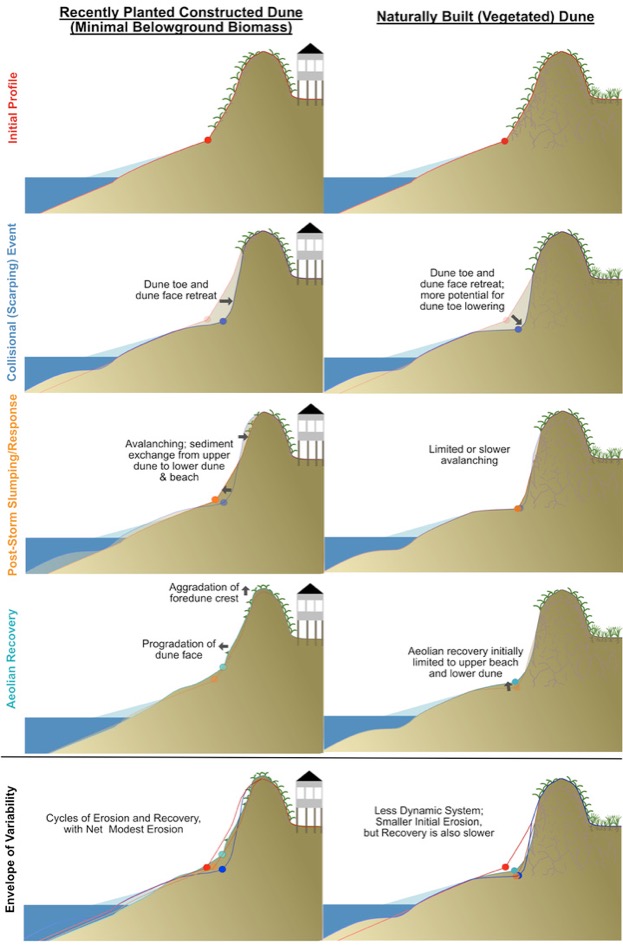 Joining Hein on the multi-institutional research team are Julie Zinnert of Virginia Commonwealth University and Nicholas Cohn of the U.S. Army Engineer Research and Development Center, along with a group of ERDC collaborators.

“Sand dunes are the first line of defense against storm waves and flooding,” says Hein. “They occur naturally along many coasts, and if degraded or absent, coastal localities build them for protection. Our project will determine the trade-offs between natural and constructed dunes to inform coastal-management decisions.”

Natural dunes develop slowly as plants such as beach grass and sea oats trap windblown sand, then continue to grow upward from their roots with the rising dune.

“A natural dune isn’t just a pile of sand,” says Hein. “It has an internal structure consisting of roots and fungi, which strengthen the dune and can reduce erosion from storms.”

Constructed dunes, pushed into place by bulldozers or initiated by sand-trapping fences, lack that internal structure, and are therefore thought to be less stable. But that instability isn’t all negative.

“The absence of internal biomass within constructed dunes may leave them more vulnerable to the impacts of storms and sea-level rise,” says Hein, “but that allows for more transport of sediment along the face of the dune. This can in turn reduce water levels during future storms and may promote faster dune recovery.” 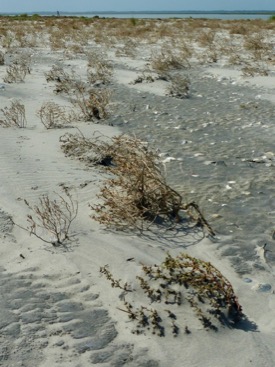 Hein, Cohn and Zinnert will use a suite of tools to compare and contrast the dynamics of natural and constructed dunes. Their research will focus on the well-studied dunes of the U.S. Army Corps of Engineers’ Field Research Facility in Duck, North Carolina, with forays to other dune fields along the Outer Banks of N.C. and Virginia. Their results will be applicable to coastal dune systems worldwide.

Hein says, “We’ll first use LIDAR to explore how the morphology and ecology of natural and built dunes changes and has changed in recent years.”

LIDAR — which stands for Light Detection and Ranging — employs pulses from an aircraft-mounted laser to map the ground surface in extremely high resolution, allowing researchers to detect elevation changes of only a few inches.

The team will complement their LIDAR elevation maps by digging and coring into selected dunes to measure the abundance and distribution of roots and fungi.

They will also employ a high-tech, "mini-rhizotron" camera, which captures high-resolution, 360-degree still images and videos of growing roots. 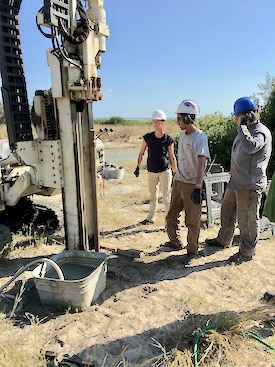 “Our field observations have two main aims,” says Hein. “We want to quantify the degree to which roots and fungi strengthen the dune structure during storms, and to better understand the mechanisms by which this mechanical strengthening might alter the style and rate at which a dune slumps or collapses.”

“We’ll use modeling simulations to explore how the internal biomass architecture of a dune affects coastal evolution on scales of days to centuries,” says Hein, “with a primary goal of considering the future implications of today’s management decisions.” 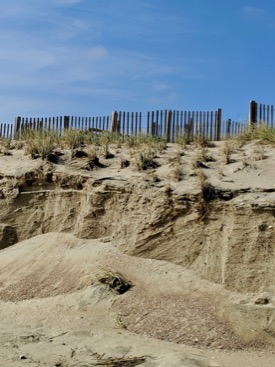 The research team will coordinate closely with local, regional, and federal partners, including regular input from an advisory group of coastal managers.

NOAA’s National Centers for Coastal Ocean Science (NCCOS) is funding the VIMS-led study through its Ecological Effects of Sea Level Rise Program. The program’s current round of funding will also support other multi-institutional research projects in California, Florida, the Chesapeake Bay region and the Pacific Northwest.