Bay hypoxia in 2020 below average due to cool temperatures, wind events, nutrient reductions

An annual report of “dead-zone” conditions in the Chesapeake Bay during 2020 indicates the total volume of low-oxygen, “hypoxic,” water was considerably less than in recent years. Scientists attribute this good news to a combination of favorable weather factors and management actions designed to curb nutrient runoff into the waters of the nation’s largest estuary.

“There was considerably less bay hypoxia in summer 2020 than in the past several years," says Marjy Friedrichs, a professor at William & Mary's Virginia Institute of Marine Science and report card co-author. "Precipitation and nutrient runoff were slightly lower than average early in the year — and much lower than during the very wet years of 2018 and 2019 — while unseasonably cool temperatures in May and September also helped to curtail the duration of the hypoxic season.” 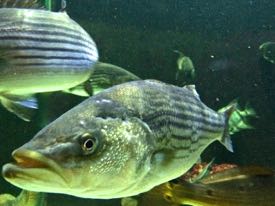 Cooler water can hold more oxygen and slows the rate at which bacteria in bottom waters remove oxygen through respiration.

“Hypoxia did peak in July at an exceptionally large volume due to a spell of very hot weather, but overall the news is good for the bay," Friedrichs says. "Even despite long-term warming temperatures, hypoxia is decreasing due to nutrient reductions — a testament to the fact that management actions to curb nutrient pollution are working.”

The height of 2020 bay hypoxia occurred on July 22, after a spell of weak winds and high temperatures pushed the total hypoxic volume to 11.2 cubic kilometers — equivalent to 4,480,000 Olympic-size swimming pools. Winds from Hurricane Isaias, which crossed the Chesapeake region during the first week of August as a tropical storm, caused bay hypoxia to dip by more than half — from 10.5 cubic kilometers on Aug. 1 to 4.2 km3 on Aug. 5. Hypoxia returned in early September until stronger winds and cooler temperatures prevailed, ending hypoxia in the mainstem of the bay earlier than in previous years.

The summer dead zone is one of the major water quality concerns facing the Chesapeake Bay. The dead zone forms when rivers supply excess nitrogen from fertilizers, wastewater and other sources, fueling short-lived blooms of algae. Bacteria then eat the dead, sinking algae, consuming from bottom waters the dissolved oxygen that fish, shellfish, crabs and other animals need to survive. Bay dead zones peak during summer, when hot weather encourages algal growth and bacterial decay, and reduces how much oxygen the water can hold. At the same time, calm winds typically preclude the mixing of oxygen-rich surface waters into the depths. 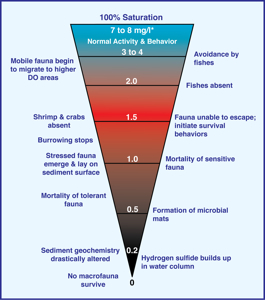 The team’s report card summarizes oxygen conditions in the bay each year as estimated by their 3-D, real-time hypoxia forecast model, originally developed with funding from NOAA. The model is based on 35 years of water-quality data collected by the Chesapeake Bay Program and is forced daily by wind data provided by NOAA and river-input data provided by the U.S. Geological Survey. The modeling team, which includes Research Scientist Pierre St. Laurent at VIMS, also generates dissolved oxygen statistics for previous years for comparative purposes.

Each spring, scientists from the University of Michigan use observed values of precipitation and runoff within the Chesapeake watershed to predict the extent of summertime hypoxia in bay waters. Their forecast is based on a known correlation between runoff volume and hypoxic conditions — in years with a wet spring and high runoff, the influx of nutrients typically generates intense summertime hypoxia in bay waters, while in years with a dry spring and low nutrient runoff, the summertime bay is typically better oxygenated. However, this model does not incorporate several other factors known to affect bay hypoxia, including summertime temperatures and winds.

“The early season forecast was quite good, but the conditions ended up being even better than predicted due to our unusually cool May and September,"  Friedrichs says. "Winds associated with Hurricane Isaias also caused the well-oxygenated surface waters to mix down below the surface and temporarily alleviate some of the summer hypoxic conditions.”

The findings of the VIMS hypoxia model and Dead Zone Report generally match the dead-zone report provided by the Maryland Department of Natural Resources for the Maryland portion of the bay. Slight variations in results are due to different reporting periods and regions, as the Virginia report includes results for the full bay from the onset of hypoxia in spring to its cessation in the autumn, while Maryland’s DNR focuses on Maryland conditions in the mainstem bay from June through September.

Overall, scientists and managers agree the 2020 hypoxia report card is good news for the bay.

“Even despite long-term warming temperatures,” says Friedrichs, “hypoxia is decreasing due to nutrient reductions. When we look at the long-term trend and take transient weather conditions and summer storms into account, we’re generally seeing lower volumes of hypoxic water in recent years. This is due to the success of management actions that have been reducing nutrient runoff into the bay.”

Friedrichs notes that 2018 and 2019 were exceptions because they were particularly wet years, and associated with extremely high rates of spring freshwater discharge. Graduate students in her modeling group are studying the factors that control these year-to-year changes in dead-zone size. Master’s student Luke Frankel is studying how much worse hypoxia would have been in recent years if not for the nutrient reductions accomplished since 1985. Doctoral student Kyle Hinson is studying the long-term increase in bay temperatures during summer, which is four times greater than for the entire year. The increase is particularly high in Virginia waters due to the influx of warming ocean waters.