Virginia’s Eastern Shore preserves some of the most pristine barrier islands and saltmarshes in the world. Just offshore lies a busy shipping lane traversed by vessels moving between the ports of the Chesapeake Bay, Delaware Bay, and the New York-New Jersey metropolis.

With that background, a myriad of federal, state, and local agencies held a major oil-spill drill in Accomack County last week. The drill — part of the National Preparedness for Response Exercise Program, or PREP — was based on a scenario in which a container ship moving north 20 miles off Virginia’s seaside Eastern Shore strikes an unknown object and discharges 2,500 barrels of heavy fuel oil. The crew discovers the spill two hours later and notifies authorities. By that time, winds and currents have put the spilled oil on a collision course with the beaches and tidal marshes of Parramore and Cedar islands. 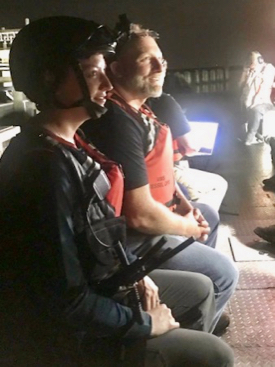 Emily Hein, assistant director for advisory services at the Virginia Institute of Marine Science, serves on the statewide group that planned and conducted the drill: the Virginia Area Committee of the U.S. National Response Team. “V.A.C. members represent the entities that would respond to an oil or HAZMAT spill in Virginia,” says Hein. “We meet quarterly to review best practices before a real spill happens and to examine lessons learned from real events.” The VAC comprises federal, state, NGO, and industry partners, led by U.S. Coast Guard Sector Hampton Roads.

The drill was designed to simulate a plausible real-world event. “There’s a lot of offshore vessel transit in the area,” says Hein. “Several years ago, we realized that if a spill were to affect the seaside Eastern Shore, the response would have to be very different than if it happened anywhere else in the state, both because of the ecological sensitivity of the barrier islands and marshes, and because there are so few response resources out there.”

That realization led Hein and other members of a VAC subcommittee to create an “annex” to Virginia’s statewide contingency plan for spills of hazardous materials. The annex provides a specific blueprint for responding to a spill in the remote and sensitive habitats of the seaside Eastern Shore. 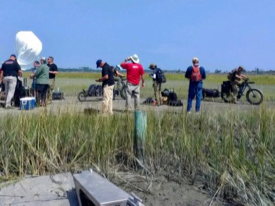 “This PREP exercise tested that annex for the first time,” says Hein. “We based the field deployments out of Wachapreague because both the Coast Guard and VIMS have a presence there.” While Friday’s planned deployment of an oil boom was postponed due to unfavorable weather, a Thursday activity with Verizon tested a suite of cutting-edge communications equipment. This included a pair of E-bikes that deployed balloons outfitted to improve cellular coverage among drill participants in the remote region.

The majority of the weeklong exercise involved a “tabletop" simulation of the imaginary spill, conducted from an Incident Command Post and Joint Information Center established in tents at the Eastern Shore Community College near Melfa. Here, drill participants tested notification procedures and initial response actions, practiced communicating with the Eastern Shore community and media outlets, and weighed the pros and cons of dispersant use, among many other assessment and validation activities.

The drill was by all accounts a worthy endeavor. Lt. Commander Renee McKinnon, chief of Emergency Management and Force Readiness for USCG Sector Hampton Roads, says “Anytime people can meet and work together before a response is ideal. It helps foster relationships and build trust. We presented a difficult scenario for them to work through and to push the team to think outside the box. I think they worked together well and if there was an actual spill they would be even more effective.”

Frank Csulak, scientific support coordinator with NOAA’s Office of Response and Restoration, says “The drill was absolutely a success. This was the first exercise I’ve been involved with where participants devoted so much time and effort to educating local stakeholders, identifying local resources at risk, and attempting to address unique local issues, such as constraints associated with remoteness, lack of infrastructure, and difficulty in accessing adjacent shorelines.”

John Giese of Virginia’s Department of Environmental Quality agrees. “The exercise succeeded on many fronts,” he says. “Stakeholder outreach was conducted on a scale I’ve never seen before or during an exercise, and we learned many lessons that will contribute to the rewrite of both the Virginia Area Contingency Plan and its Eastern Shore Annex. [The drill] was a testament to the dedication of Virginia's response community to truly preparing for a major oil spill.” Giese manages DEQ’s Office of Pollution Response Preparedness.

The role of VIMS

VIMS’ participation in the Eastern Shore oil-spill exercise—and previous drills in other state waters—reflects its dual nature as both a state agency and a research and academic institution. It also leveraged the expertise and local knowledge offered by faculty and staff at VIMS and its Eastern Shore Lab.

“What we at VIMS [will do] during the [postponed] deployment exercise is very different than what we would be doing in a real spill,” says Hein. “The exercise fell under our advisory mission, as we were helping the state and federal partners figure out the best way to plan and prepare for an event that could clearly threaten the Commonwealth’s marine resources.”

During an actual Eastern Shore spill, the physical response—deploying booms, cleaning beaches and marshes, spreading dispersants if warranted—would be carried out by an “Oil Spill Removal Organization” identified by the responsible party in its federally mandated response plan. The response would be guided by a Unified Command comprised of federal and state “On-Scene Coordinators” and any major landowner impacted by the spill.

VIMS’ primary role would be to provide scientific and navigational support as requested by the Unified Command.

“One of the things we identified early on,” says Hein, “is that the response to an Eastern Shore spill would have to rely very heavily on local knowledge to physically get responders where they need to go. You can’t rely on nautical charts, as conditions change way too quickly. Some of that knowledge rests with folks at the ESL and The Nature Conservancy, scientists and staff who have spent hours and hours exploring those back-barrier channels and marshes.”

VIMS would also be ready to offer scientific expertise concerning the Eastern Shore ecosystem. “Our researchers would know whether a particular species is likely to be in a particular area at a particular time” says Hein, “or whether there might be a vulnerable bed of eelgrass or oysters nearby. Those are questions that someone at VIMS can often answer. The expertise that we can bring is really our most valuable resource.”

Ann Hayward Walker, president of SEA Consulting and former NOAA scientific support coordinator, says of VIMS’ involvement during the PREP exercise, “Having an academic in the environmental unit [of the Incident Command System] is rare and should be counted as a huge success.”