Bryan Watts says the trans-Atlantic journey is a challenge for the shorebirds, particularly the southbound migration, which coincides with peak hurricane season in the Atlantic. Watts, director of William & Mary’s Center for Conservation Biology, is lead author of a paper in Nature Scientific Reports detailing how two separate populations of whimbrels have adopted two different strategies for negotiating heavy weather. Other Center for Conservation Biology co-authors on the paper include Fletcher Smith, Chance Hines and Laura Duvall.

“For centuries, bird people like us have been sitting along the coast, watching these birds take off over the ocean,” Watts said. “And we wonder how they make it.” 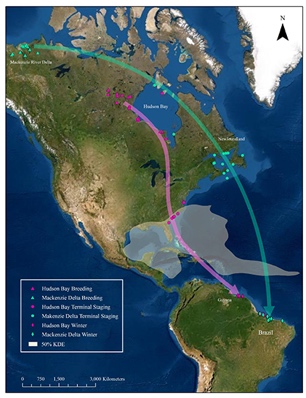 The paper, “Whimbrel populations differ in trans‑Atlantic pathways and cyclone encounters,” is a partial explanation of how the birds make it. Watts and his collaborators fitted some of the birds with solar-powered transmitters to track the birds over nearly four dozen southbound migrations.

For starters, there are three separate breeding populations of North American whimbrels. One group breeds in Alaska, migrating over the Pacific, and were not part of the CCB study. The paper concerns itself with a population that breeds around Hudson Bay and another that uses Mackenzie River Delta breeding grounds, in Canada’s Arctic tundra.

Watts and his collaborators found that the Hudson Bay birds have developed a migratory route that’s completely different from the Mackenzie River whimbrels.

“One strategy, used by the Mackenzie Delta birds, seems to be to stay over cooler water, where the hurricanes don’t form,” Watts said. “They go way east, over the north Atlantic and then ride the trade winds back down to South America.”

By contrast, the Hudson Bay birds go south over a more inland route, crossing the Great Lakes and then flying over a shorter stretch of ocean — but at the height of hurricane season. The Hudson Bay birds have the option of hunkering down on a variety of islands if they encounter a storm.

For instance, Watts recounts a Hudson Bay whimbrel that ran into Hurricane Irene in August of 2011. The bird had to retreat nearly 250 miles from the Category 2 storm, putting down in the Bahamas. It stayed in the Bahamas 19 days before taking off again, only to run into Hurricane Maria near Puerto Rico. After a 17-day stopover in Puerto Rico, the bird continued on to successfully finish the migration in South America.

“That Hudson Bay strategy probably wouldn’t be viable if there weren’t islands to use as stopover points,” Watts said. “On the other hand, those Mackenzie birds fly way out to sea. They have to fly six days nonstop from one point to another. If they encounter a storm, they could be lost at sea.”

Each strategy comes with some finer points. For instance, the Mackenzie Delta birds left their breeding grounds an average of 18 days earlier than the Hudson Bay whimbrels, and arrived on their wintering area some 24 days before the Hudsons. The populations even use different staging areas, and even have different pre-flight diets before taking off over the Atlantic.

The paper notes that on 17 of the 47 crossings tracked, birds encountered at least one storm. Mackenzie Delta birds logged only three storm encounters in 26 crossings. Hudson Bay birds ran into storms on 13 out of 21 crossings.

Island stopovers have their own dangers; three Hudson Bay birds were lost on islands, two to hunters and a third is believed to have been taken by a predator. But, if you discount hunting, Watts says both strategies appear to work well for the whimbrels.

“Not sure how long we’ll be able to say that,” he added, “with the increase in the number of storms due to global warming.”

Watts said that sea surface temperatures are the major driver of storms, a reason that storm development is historically rare in the cool waters of the north Atlantic.

“But if we continue to increase sea surface temperatures up into the North Atlantic, we could get more storms in that flyway,” he said. “These Mackenzie Delta birds are flying 5,000-plus kilometers nonstop. If they encounter a storm early in that flight, it’s probably not viable.”

The Hudson Bay birds face danger from increased sea surface temps, too. Watts noted that an ever-increasing number of major storms would mean just that many more storms for the Hudsons to try to avoid.

Watts said availability of tracking devices allows researchers to study at least a portion of a complex avian phenomenon. Until this study, ornithologists seeing a whimbrel staging on the Eastern Shore in August would have to guess at the bird’s breeding population. He pointed out that whimbrels are just one of many long-migrating bird species that have to deal with the vicissitudes of a long trans-Atlantic migration, including hunting pressure on some Caribbean islands. Hunting is likely responsible for a decline in a number of shorebird species that touch down in Guadeloupe, Martinique, Barbados and other islands.

“Whimbrels are just one species,” Watts said. “The suggestion is that many other species show similar migration patterns.” He said the paper opens the door for additional studies on migration and the future of shorebird success, while addressing a number of questions that have ornithologists scratching their heads.

“For instance, there’s been a lot of speculation that birds can sense the storms out to sea,” Watts said. “People say the birds won’t leave if there’s a storm out there in the Atlantic Basin, that they can game the system and wait it out.

“We don’t believe that’s true. Plenty of these birds have left when there were four named storms out there. So we feel that they’re leaving blind, but armed with the capability of dealing with whatever comes.”