Indicates potential for further expansion in Chesapeake and into Delaware Bay

A new study by researchers at William & Mary's Virginia Institute of Marine Science warns that blue catfish — an invasive species in several Chesapeake Bay tributaries — tolerate salinities higher than most freshwater fishes, and thus may be able to expand their range downstream into mainstem Chesapeake waters, and from there into new bay tributaries and even Delaware Bay.

Conducting the study, reported in the Nov. 5 issue of PLOS ONE, were Ph.D. student Vaskar Nepal of William & Mary’s School of Marine Science at VIMS and VIMS Fisheries Professor Mary Fabrizio. 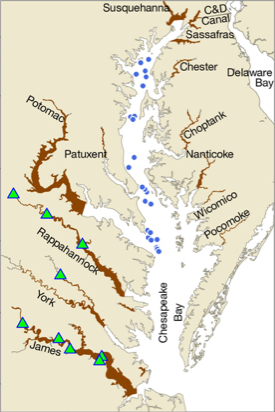 Nepal and Fabrizio undertook the study to better constrain the salinity tolerance of blue catfish in their non-native Chesapeake Bay habitat. The value used in the 2014 report that currently guides management of invasive Bay catfishes was based on a study of blue catfish from their native range: the fresh waters of the Mississippi River basin. Evidence suggests that populations of “blue cats” and other fishes may become more salt tolerant when exposed to brackish estuarine waters.

“We wanted to see how long blue catfish can survive at a given salinity to help us better understand the extent to which they can colonize areas other than those where they were originally stocked,” says Nepal.

Blue catfish were introduced to tidal freshwater stretches of the James, York and Rappahannock rivers during the 1970s and 1980s to enhance recreational fisheries.

They have since expanded their range downstream in these bay tributaries, where they now occur in densities up to 220 fish per acre, with an estimated population of 1.6 million fish in just one seven-mile stretch of the James. Blue cats feed on vegetation, mollusks, and fishes, often out-competing native species such as white catfish.

Nepal and Fabrizio’s findings suggest that blue catfish have the potential to expand their range even farther downstream and into the bay proper, from which the fish could then migrate upstream into other bay tributaries, with the added possibility of a jump into the Delaware Bay via the Chesapeake and Delaware Canal.

“Our results indicate that blue catfish can use brackish habitats to colonize new river systems, particularly during wet spells when salinity decreases throughout the tidal rivers of the Chesapeake Bay,” says Nepal. “They also show that range expansion is most likely to be carried forward by the largest fish.”

In addition to raising fresh concerns about the ecological impacts of blue catfish in estuarine waters of the mid-Atlantic, the study also provides knowledge that managers can use to help mitigate the threat.

“Because range expansion is most likely to be carried forward by the largest fish and during the wettest years,” says Nepal, “increased monitoring of likely dispersal corridors during these periods may allow selective removal of blue catfish, and disruption of dispersal processes.”

“An ounce of prevention is worth a pound of cure,” adds Fabrizio. “Proactive prevention and early removal of blue catfish from these new habitats is likely to be an effective approach to minimizing their negative impacts.” 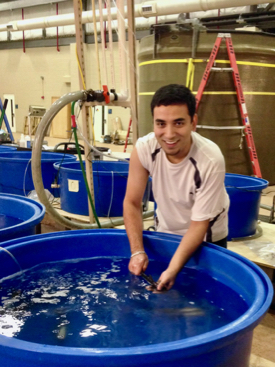 In the laboratory, they held blue catfish collected from the James River in tanks with eight different salinity levels from zero to 27 units on the practical salinity scale, which runs from zero (completely fresh) through 35 (average seawater). Salinity in the mainstem Chesapeake can vary seasonally and spatially from zero to 28 psu due to large differences in river discharge between dry and wet months.

The lab experiments show that blue cats can survive up to three days when exposed to waters up to 17 psu, suggesting they can survive in most downstream areas of the bay’s Virginia tributaries, and use the mainstem of the upper bay to move into other tributaries in Maryland and into Delaware Bay. The researchers continue to study the chronic effects of salinity on blue catfish health, with some evidence of negative impacts on growth and metabolism below lethal levels.

The survey data, collected in the James, York and Rappahannock rivers between 1975-2017, reveal a gradual downstream expansion in the range of blue catfish, from tidal freshwaters to habitats exceeding 10 psu. The species has been collected at salinity as high as 21.8 psu in the James River.

Both survey and lab data show that bigger fish are more tolerant of saltier waters. “We found that larger blue cats — those longer than 200 millimeters [about 8 inches] — are more tolerant of salinities above 10 psu than smaller, immature fish, and thus have a greater ability to use these saltier habitats to invade additional areas throughout the Chesapeake Bay,” says Nepal.

The threat of range expansion is thus greatest among big fish during wet spells. This combination can lead to “jump dispersal,” wherein just a few adult blue cats or a single egg-bearing female move into a new, relatively distant area. For context, blue catfish, which have been clocked swimming at 0.67 mph, could traverse the Bay’s widest point (30 miles) in less than two days. If rain had lowered salinity in the mainstem below 17 psu, those fish could arrive on a new shore ready and kicking to establish a new population.