The rapid growth of oyster aquaculture in the Chesapeake Bay has raised questions about its effects on water quality, with proponents touting benefits including reduction of water-column nutrients and increased clarity, and other stakeholders pointing to drawbacks such as enrichment of sediment nutrients and altered current patterns.

“We found differences in water quality and current speed inside and outside the farms,” says Turner, “but they were minor. The differences we measured between sites and between seasons were typically an order of magnitude greater.” 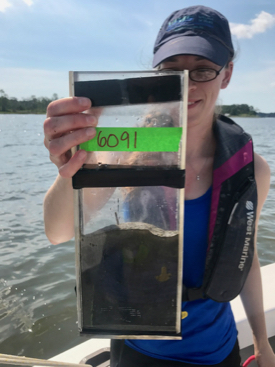 The team’s findings suggest room for growth in oyster aquaculture in the Bay, as long as growers continue using low-density culture with well-spaced cages.

“Even though we detected no effects in the water column during a single tidal cycle,” Turner says, “we know oysters take up nitrogen and phosphorus through feeding and growth, and over time we would thus expect harvesting of farmed oysters to be of benefit to the bay.”

Excess input of these nutrients via fertilizers, wastewater and other sources is a main reason for impaired water quality in the Chesapeake, with their reduction and removal a key goal of bay restoration efforts.

Andy Lacatell, Virginia Chesapeake Bay director of The Nature Conservancy, says, "This important research demonstrates that, while the positive impacts on water quality may be small, just the presence of oyster aquaculture improves the health of the bay."

The VIMS team conducted the research as part of a broader aquaculture study initiated by The Nature Conservancy in several states and countries, including assessment of issues related to oyster farming in Washington and California and seaweed farming in Indonesia and Belize.

Each of these aquaculture localities has its own issues. In the Chesapeake Bay, some stakeholders are concerned about the negative impacts of oyster farms on viewsheds and sediment nitrogen budgets, while others tout the environmental benefits — one oyster can filter a bathtub of water per day, positioning oyster farms as a means to improve conditions in an estuary experiencing decades of eutrophication due to excess nutrients.

Another motivation for the study was to better inform recent considerations of oyster aquaculture as a “Best Management Practice” for helping localities meet the bay’s pollution “diet” or Total Maximum Daily Load.

“Given these questions and the continued growth of the industry” says Turner, “stakeholders need a greater understanding of how oyster farms impact the Bay, whether negative or positive.” Oysters are the fastest growing segment of Virginia’s shellfish aquaculture industry, with a farm-gate value in 2017 of $15.9 million. 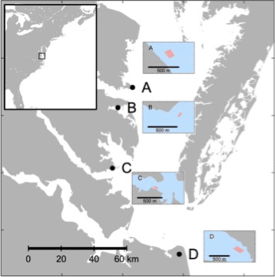 The researchers conducted the study during summer and fall of 2017, comparing turbidity, current speeds and levels of dissolved oxygen and chlorophyll within and adjacent to oyster farms at four sites in the lower Chesapeake Bay: Windmill Point. Bland Point, Monday Creek, and Broad Bay. The farms differed in size, annual production and use of either bottom-mounted or floating cages. The research team collected data both from the water and underlying sediments.

“Because oysters filter phytoplankton and other particles from the water, you might expect chlorophyll and turbidity to be consistently lower inside the farm footprint than outside,” says Turner. “But that’s not what we found. Chlorophyll wasn’t significantly lower inside any farm during any season, and turbidity was significantly lower in only two cases — the farm at Monday Creek in summer and at Broad Bay in summer and fall.” 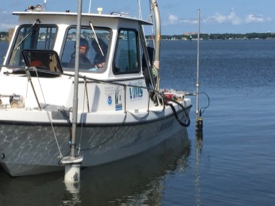 Because oysters produce feces whose breakdown by bacteria and chemical processes can remove oxygen from the water, some stakeholders have also raised concerns of a decrease in dissolved oxygen inside oyster farms. However, “the only significant change in dissolved oxygen we found was an increase inside the farm at Broad Bay in summer and fall,” says Turner. The influence of farms on current speed was also mixed, with significantly lower speeds inside the farm at Windmill Point in both summer and fall and significantly higher speeds within the farms at Monday Creek and Broad Bay in summer.

“Overall,” says Turner, “our results show that farms do have some significant impacts on local water quality, but that they aren’t always in the direction you might expect, and are small compared to naturally occurring differences between sites and seasons.”

The team’s estimate of farm-scale filtration rates may help explain their findings.

“We calculate that only a small amount of the water that passes through a site during the peak tidal current can be filtered by oysters,” explains Turner. “This is consistent with our observations of minimal impact of aquaculture farms on water quality.”