Lays groundwork for further investigation of communication pathways in ocean

Studies of how global change is impacting marine organisms have long focused on physiological effects — for example an oyster’s decreased ability to build or maintain a strong shell in an ocean that is becoming more acidic due to excess levels of carbon dioxide.

Now, a study led by Emily Rivest of William & Mary’s Virginia Institute of Marine Science synthesizes the results of these pioneering behavioral studies — revealing both broad patterns and intriguing outliers — and provides a conceptual framework to help guide future research in this emerging field. 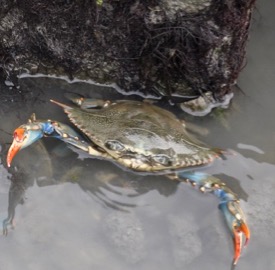 “Climate change will significantly impact marine organisms by altering sensory pathways,” says Rivest, an assistant professor at VIMS. “This will have consequences for ecological and evolutionary interactions, including mating, predation and habitat selection.”

As an example, she cites a 2016 study led by co-author Brittany Jellison of the University of California, Davis, which showed that ocean acidification makes tidepool snails more prone to sea-star predation by interfering with their ability to process and respond to chemical cues that starfish leave in the water.

An ongoing, VIMS-led study in the Chesapeake Bay is also looking at how ocean acidification might affect a predator-prey interaction — that between blue crabs and clams.

The current study, based on a review of 120 pertinent journal articles, appears in the latest issue of Frontiers in Marine Science. In addition to Rivest and Jellison, it was co-authored by Gabriel Ng, Erin Satterthwaite, Susan Williams and Brian Gaylord of UC Davis and Hannah Bradley of James Madison University. The study was funded by the National Science Foundation.

One of the study’s goals was to clarify how human pressures on the environment might impact each step in the sensory pathways between marine organisms.

“Our review,” says Rivest, “emphasizes that behavior is the outcome of a sensory pathway that includes the production of information, transmission of that information through the environment, reception of the information by an organism, and then a response — what the organism decides to do with the information.” The review also distinguishes between information produced incidentally — what scientists call a cue — and information that an organism produces intentionally—a signal.

“Knowing where, and in how many places, climate change breaks that pathway,” she adds, “will help us anticipate how it might affect broader ecological processes, like food-web and population dynamics.”

Satterthwaite adds, "If we can better illuminate where climate change stressors impact the sensory pathway, then we can develop more targeted, effective management and conservation efforts."

The team’s review turned up examples of global-change impacts at all steps in the sensory pathway. For example:

The team chose as their global-change impacts those listed by the Intergovernmental Panel on Climate Change in its most recent report: rising temperatures, ocean acidification, enhanced low-oxygen zones, salinity changes, heightened UV-B radiation, increased turbidity, altered hydrodynamics, greater stratification and excess nutrients. The IPCC is the U.N. body tasked with guiding the international response to the climate-change crisis.

The team’s findings have implications on both the global and local scale.

“We think the common denominator could be physiological stress,” says Rivest. “The change in temperature, salinity, or ocean acidification stresses the organism and may impair its ability to produce a cue or signal.” 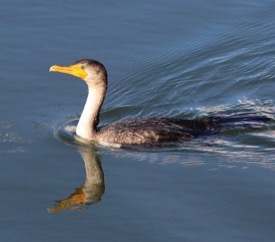 But when it comes to transmission, the team’s review found that global change stressors tend to affect just one mode — acoustic, visual or olfactory.

For instance, Rivest cites a study that determined the decline of a Florida coral reef was substantially affected by increased nitrogen from land-based runoff.

“That’s one of the benefits I see of doing work like this is,” says Rivest. “If you can better understand the relationship between pathways and more local stressors such as nutrient pollution, then you have a more tractable way to make a difference. Rather than trying to affect the behavior of the whole world — to lower carbon emissions — you could work to manage local causes of pollution such as land clearing and stormwater runoff. These local solutions may actually be more effective in some places, and they are not currently getting as much attention.”