During WWII, naval oceanographers discovered a reflective layer that rose and fell across their sonar screens once each day. Further research revealed that it comprised swarms of fish and tiny sea creatures­ called zooplankton­ migrating toward the ocean surface as the sun set to feed under cover of darkness, then swimming back to the inky depths at dawn to escape their own predators during daylight hours. 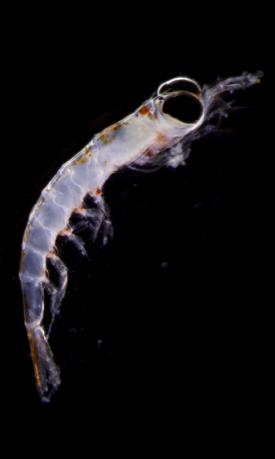 Initially valued as a way for submarines to hide their movements, this daily vertical migration is now known to play a major role in the global carbon cycle, as the consumption of surface algae by migrating zooplankton carries carbon to the deep sea, thereby reducing carbon-dioxide levels in the surface ocean and atmosphere. But the exact amount of carbon exported to the deep sea via this "biological pump” has remained difficult to quantify on a global basis, based as it is on intermittent measurements from single ships atop a vast ocean.

A study published in the Dec. 12 issue of Nature reports on the use of satellite-borne lidar to map the daily vertical migration of zooplankton across the world’s seas over the course of a decade. Lidar is the laser equivalent of sonar, using pulses of light rather than sound to image objects in the air and water.

Lead author Michael Behrenfeld of Oregon State University says, “What the lidar allowed us to do is sample these migrating animals on a global scale every 16 days for 10 years. We’ve never had anywhere near that kind of global coverage to allow us to look at the[ir] behavior, distribution and abundance.”

VIMS professor and co-author Deborah Steinberg contributed to the study by “ground-truthing” the satellite-based measurements with data obtained from ships by deploying fine-mesh nets to collect, then count and identify the many species of migrating zooplankton. She has been conducting field studies of zooplankton vertical migration for the last three decades, most recently near Antarctica, Bermuda and in the northeast Pacific as part of the EXPORTS project. 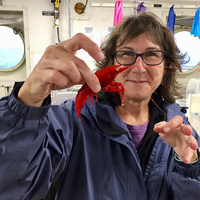 “Combining data from ships and satellites allows us to greatly expand our research footprint,” says Steinberg. “It helps to increase our quantitative understanding of the role of zooplankton in the global carbon cycle, particularly in terms of its variability in time and space. That knowledge is critically important for refining global climate models.”

Joining Behrenfeld and Steinberg on the study were researchers from 11 other marine and space science institutes around the world, including NASA Langley Research Center in Hampton, Virginia, and NASA Headquarters in Washington, D.C. Other collaborators hailed from the European Institute for Marine Studies in France, the University of Alaska Fairbanks, University of British Columbia, University of California Santa Barbara, University of Maine, University of Virginia and University of Washington.

Co-author Chris Hostetler of NASA Langley says, “This is the latest study to demonstrate something that came as a surprise to many — that lidars have the sensitivity to provide scientifically useful ocean measurements from space. I think we are just scratching the surface of exciting new ocean science that can be accomplished with [this tool].” 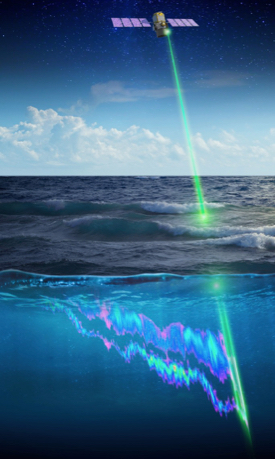 The team discovered that vertically migrating zooplankton generally make up a greater fraction of all plankton in the clear waters of subtropical seas, consistent with the idea that avoiding visual predators is an important strategy in these regions. They also found the total mass of these animals is higher in polar and upwelling regions, where food is typically more abundant.

The 10-year satellite record, from 2008 to 2017, also reveals noticeable trends in the abundance of vertically migrating zooplankton, which appear to correlate with changes in the availability of food in surface waters. General agreement between the satellite data and data collected at the world’s two long-term, ship-based sampling stations lends credence to the new lidar approach. These stations are the Hawaii Ocean Time-series and the Bermuda Atlantic Time-series, where Steinberg has led a zooplankton monitoring program since the late 1990s.

“Our results provide a detailed view of the global activities of vertically migrating zooplankton and a path for refining how we can quantify their importance in the carbon cycle,” says Steinberg.

From ship-based sonar and nets to satellite-based lidar

Sonar and lidar began life as acronyms: SONAR for sound navigation and ranging and LIDAR for light detection and ranging. Both can be used to paint a picture of a target area by emitting pulses of energy and recording reflections off any object whose density differs from the background — whether that’s a 100-meter submarine or a 1-millimeter copepod.

Sonar has long been a favorite tool of oceanographers, as sound can travel significant distances even through cloudy seawater, providing a comprehensive view of zooplankton vertical migration at a single location, particularly when combined with comparative day and night net tows to calibrate the sonar. But these measurements are rarely collected at regular intervals or over long periods due to the high cost of ship time.

Lidar has traditionally been considered of limited use in marine studies, as light quickly attenuates in even relatively clear water. It has been deployed from aircraft during recent decades to study the distribution of zooplankton and other marine life, but only in the top few meters of seawater and on a limited geographic scale. Like shipboard sonar, airborne lidar also suffers from high cost and irregular sampling. 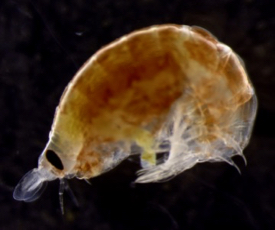 The Nature study is the first to use a satellite-based lidar sensor to map the abundance and distribution of vertically migrating zooplankton on a global basis and over multiple years. Unlike other ocean sensors that measure reflected sunlight, lidar’s use of a laser light-source also gives it the capacity to measure marine organisms during both day and night — crucial for studying the magnitude of a daily vertical migration.

The sensor was actually designed to study the atmosphere and has been doing so since it was launched aboard a Delta II rocket in 2006 in a joint venture between NASA and the French space agency. The team’s breakthrough was to re-purpose the lidar data to decipher global patterns in the abundance of surface zooplankton.

“The footprint of the CALIPSO laser is 300 feet in diameter at the ocean surface, with a vertical sampling depth of 66 feet,” says Behrenfeld. CALIPSO stands for Cloud-Aerosol Lidar and Infrared Pathfinder Satellite Observation. “This means that each lidar measurement integrates the signal from a water volume that is 5 million times greater than that measured during an entire night using traditional ship-based optical sensors.”

One challenge with satellite lidar data is that the measured differences between night and day are not only due to changes in the abundance of vertically migrating zooplankton, but also reflect changes in the phytoplankton on which they feed. “Further modeling and analyses of field data are needed to refine descriptions of these other contributors,” says Behrenfeld.