It sounded like a wind tunnel on the other end of the phone.

“I’m so sorry for all the noise,” said Rachel O’Brien. “My husband is frying bacon — for an experiment.”

As COVID-19 and stay-at-home orders upended life as we know it, O’Brien turned her kitchen into a makeshift laboratory. She and her students literally cooked up experiments in their homes by measuring aerosols released during cooking. Bacon, it seems, is the culinary equivalent of a smoke machine.

“It’s a breakfast of champions,” O’Brien said. “It also creates a lot of aerosols.” 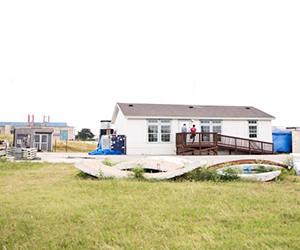 Aerosols are created when fine solid particles or liquid droplets are suspended in air or another gas. Dust, haze and smoke are all examples of aerosols. They play a vital role in influencing air quality and the Earth’s climate.

“In general, aerosol particles are not healthy to breathe in high concentrations,” O’Brien said. “The smaller ones can get deep into your lungs and the larger ones will deposit a little bit higher. You don't want a whole lot of material coating or getting into your lungs, so you want to make sure you’ve got a safe particulate load.”

Even in non-pandemic times, people in the United States spend nearly 90% of their time indoors, most of that in their own home, she explained. As a result, individuals’ exposure to most airborne pollutants is strongly influenced by their household environment.

For the past several years, O’Brien has been part of a team of researchers from 13 universities working to identify the most important aspects of the chemistry that controls the indoor environment. In June 2018, the group conducted a month-long experiment at the University of Texas at Austin to simulate real-life air quality conditions inside a full-sized test house.

The HOMEChem experiment (House Observations of Microbial and Environmental Chemistry) was set up inside a 1,200 square-foot manufactured home. The researchers employed a suite of instruments to measure a range of indoor microbial environments and chemical reactions that are a part of daily life. Their research focused on everyday activities performed in home environments, such as cooking and cleaning.

“The idea was to run experiments that simulate different things that would happen in a typical home environment, under controlled conditions that you could study,” O’Brien said.

O’Brien and her students are still analyzing the HOMEChem dataset, which the team plans to release publicly this summer. Already the data, collected with real-time instrumentation, have provided some important insights into chemical processes that occur indoors.

A key finding, detailed in a paper published last summer in Environmental Science: Processes & Impacts, is that cooking activities were the primary source of indoor submicron particles. The paper stated that during cooking events, particle mass in the air increases and a substantial fraction of the increases are due to chemical species related to cooking oil. The majority of those cooking-associated particles are in the ultrafine mode. 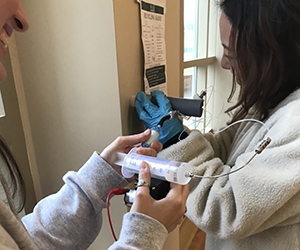 “We found that cooking is one of the major sources for depositing aerosol particles in the indoor environment,” O’Brien said.

One of the challenges of studying air quality in real-life conditions is instrumentation. In the lab, chemists rely on mass spectrometers to analyze compounds. The large instruments trap ions and convert their signals to a mass spectrum, which provides a detailed chemical analysis of what molecules the sample contains. That process is, understandably, challenging to perform in a home environment — as a mass-spec is not a common kitchen appliance, unless you’re Mario Molina.

Having inadequate instrumentation can complicate measurements and thus confuse interpretation of chemical data, O’Brien explained. That’s what led O’Brien and her students, Hannah Przelomski (master’s candidate in environmental chemistry) and Gloria Ge (Class of 2021), to develop the Indoor Surface Extractor.

“We needed a tool that would allow us to collect samples directly off surfaces for analysis,” O’Brien said. The Sloan Foundation recently awarded the team a grant to continue development.

The ISE takes a solvent, like water, from a syringe and deposits it onto a surface. The device then sucks the solvent back up, along with any particles that had fallen down onto the surface.

“The goal is to be able to take this extractor and walk up to a surface and extract a little spot of material right off that surface,” O’Brien said. “Then we can take that sample back to the lab, prepare it and analyze it, without it ever leaving a sterile environment.”

Przelomski said the ISE has come a long way from the first prototype she developed two years ago from PVC pipe and recycled boxes. She’s engineered the latest version to be almost fully 3D-printable.

“The only pieces we can’t 3D print right now are the components that come in contact with the solvent and sample,” she explained. “That piece is made from stainless steel and Teflon, which we don’t have the ability to 3D print.”

The project began two years ago, in a world that had yet to be fundamentally changed by pandemic. Still, Przelomski said she is considering how the ISE might be adapted to test surfaces for traces of biological material like the novel coronavirus.

“I have been asked about doing biological sampling with it,” Przelomski said. “It’s something we haven’t fully explored yet, but I would think it would be possible, because the ISE extracts material from surfaces – and bacteria and viruses are on surfaces.”

Przelomski’s original and ultimate goal for this project is to provide a new understanding of the solids and liquids that are suspended in the air around us. She explained that there are still many unknowns about the chemistry of the indoors. There are far more surfaces inside versus outside, compared to the volume of air in the two environments.

“So if you think about your home or your work place, there are all these surfaces for things to deposit and react with the material already on there,” Przelomski said. “What we're doing is building a tool to better understand this organic mixture that everyone is making inside their homes.”

O’Brien says improved understanding of what contributes to the formation of particles indoors, whether they’re emitted from a surface reaction or a pan of bacon, will contribute to public health.

“Even when we’re not stuck at home all the time, it’s important to think about the air quality in your home,” she said. “And that starts with understanding what is actually in the air.”