Professor Iris Anderson of William & Mary’s Virginia Institute of Marine Science has been honored by the world’s leading coastal research society for her sustained accomplishments and important contributions to human understanding of estuaries and coastal ecosystems.

Anderson, who has been at VIMS since 1993, is a leading expert on the enrichment of coastal systems by nitrogen and carbon. Symptoms of this nutrient pollution — including harmful algal blooms, shading of sun-loving seagrasses, and an increase in low-oxygen dead zones — pose some of the greatest threats to the health of Chesapeake Bay and other estuaries worldwide. 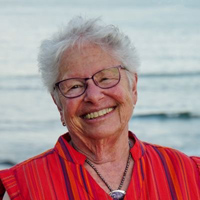 VIMS Dean and Director John Wells says, “I can think of no one more deserving of an award for lifetime achievement than Iris, who has been working tirelessly for decades to increase our knowledge of the fundamental processes that govern nutrient cycling in the bay and other estuaries along the U.S. East Coast.” In addition to the Chesapeake, Anderson’s work has recently focused on Virginia’s seaside bays and the New River estuary in North Carolina as part of the Defense Coastal/Estuarine Research Program, or DCERP.

Professor Deborah Steinberg, chair of biological sciences at VIMS, says, “Iris is a gem. Not only is she an excellent biogeochemist with a deep understanding of estuarine systems, but a wise mentor and a caring, supportive colleague. You also gotta love that 'shawp' Boston accent.”

In their award citation, members of the Coastal and Estuarine Research Federation’s Scientific Awards Committee note that Anderson “stands out as a trailblazer and leader in the fields of shallow-water estuarine and coastal ecosystem biogeochemistry and ecology” whose “research has evolved over time to keep pace with cutting-edge techniques and topics of broad interest to estuarine ecologists.” During her career, Anderson has authored or co-authored scores of highly cited papers in leading journals, including Biogeosciences, Estuaries and Coasts, Limnology and Oceanography, and Marine Ecology and Progress Series. 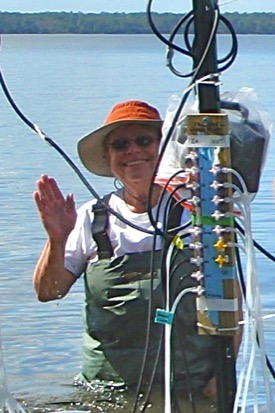 The CERF Awards Committee also highlighted the challenges Anderson overcame in a traditionally male-dominated field, noting “The impacts of Iris’ work are all the more significant given her non-traditional path. She navigated a Ph.D. program as the only woman in her class, paused her education to raise a family, and found a passageway back to gaining her doctorate and an outstanding record of professional achievements. Iris’ career serves as a strong reminder that scientific excellence can be enhanced and informed by non-linear trajectories.”

The Odum Award furthermore recognizes Anderson as an “outstanding mentor and role model” who “has been inspirational for many young scientists.” In her time at VIMS, Anderson has mentored 15 graduate students (six Ph.D. and nine master’s), 19 undergraduates and six high school interns; and taught or co-taught a total of nine graduate-level courses, including Environmental Microbiology, Aquatic Microbial Ecology, Wetlands Ecology, Isotope Geochemistry and Principles of Marine Environmental Science and Policy. She also served as associate dean of academic studies for W&M’s School of Marine Science at VIMS from 2002 to 2010, and co-founded the NSF-funded PERFECT program, which connected graduate students in VIMS’ School of Marine Science with teachers and pupils at local middle and high schools. 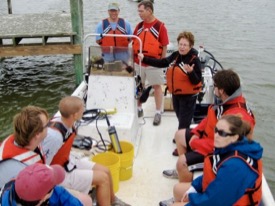 The Awards Committee notes that “Iris frequently engages students in detailed conversations about their research and freely offers both advice and encouragement. She has a long history of working with a diverse cadre of scientists and students on a broad range of both scientific and applied topics that have clarified our understanding of complex biogeochemical processes in freshwater and marine habitats.”

In addition to the Odum Award from CERF, Anderson has been recognized with a number of other honors, including the VIMS Lifetime Achievement Award (2015), a Plumeri Award from W&M (2012), and the Dean's Prize for the Advancement of Women in Marine Science (2003).