A persistent mystery surrounding one of William & Mary’s most treasured possessions apparently has been solved, by a 19-year-old sophomore.

It took her a little over a week.

The sleuth is Caitlin Dolt ’22. Two university faculty members believe she has identified the “mystery annotator” who wrote corrective notes in Latin in the margins of the university’s copy of the 1687 first edition of Isaac Newton’s Philosophiæ Naturalis Principia Mathematica.

“The Principia is arguably our most valuable and important rare book in our collections,” said Gerald Gaidmore, the Marian and Alan McLeod Director of Special Collections at Earl Gregg Swem Library. “The annotations make it extra special because they make it even more unique.”

The Principia is widely recognized as one of the most important books in the development of modern science. Written in Latin, the common language of natural philosophers of the time, the book lays out Newton’s laws of motion and universal gravitation.

William & Mary’s Principia is protected, but far from sequestered. Special Collections arranges regular showings of the book and other rare scientific tomes for the William & Mary community. And it’s of interest to more than just the scientists at William & Mary.

“Every year, I visit the Special Collections at Swem with my Latin students and we have often examined this edition of Newton’s Principia,” said Vassiliki Panoussi, professor of Classical Studies.

Dolt’s search for the mystery annotator took her through a centuries-old controversy about the invention of calculus.

She also had to deal with the peculiarities of 17th-century typography, as well as the perplexing differences between the Latin used by the scientific community of Newton’s time and the more-familiar Classical version of the language. Panoussi explained that the Latin of the Principia is known as Neo-Latin.

“It’s the version of Latin adopted from the Renaissance through the 1900s to write scientific, philosophical and other treatises,” she said. “Neo-Latin is quite different from Classical Latin, which is what we teach here at William & Mary, but close enough that one could figure out what character or word is meant.”

In addition, Dolt had to wade through the contributions of an individual who became known as the Doodler, perhaps “a bored student” Dolt says, who made seemingly meaningless marks in the Principia, filling in the o’s and q’s and committing other odd graffiti.

All of those paths, each of them extremely interesting, turned out to be red herrings in the search for the mystery annotator. Dolt ran the annotator to earth by comparing handwriting.

Joshua Erlich and Nicholas Popper, William & Mary faculty involved in the ongoing investigation, endorse Dolt’s conclusion: the mystery annotator is Rev. Thomas S. Savage, the man who donated the copy of the Principia to William & Mary in 1869.

Plenty of unanswered questions to ponder

There is still plenty of mystery surrounding the book. For one thing, the revelation of the identity of the mystery annotator has hatched a completely new conundrum: What was Rev. Savage’s motivation in making those annotations?

There are also annotations made in what appears to be a secret code.

Erlich, professor of physics, and Popper, associate professor of history, have coordinated a continuing investigation into the secrets of the Special Collection’s copy of Isaac Newton’s masterwork, mentoring Latin-literate undergraduates like Dolt, or Jackson Olsen ’16, who previously took on the investigation.

Dolt started with the same working hypothesis that guided previous investigations into the mystery annotator: The annotations were made by some learned soul who was preparing for the publication of subsequent editions of the book. Second and third editions of the Principia were published in 1713 and 1726.

The “revision hypothesis” was based on deductions based on the annotations themselves. Dolt points to annotator’s notes in a digitized version of the Principia.

“See, he does an asterisk and then he writes his note down here,” Dolt explains. “So from this, along with the corrections in the earlier part, it really appeared to us that he was editing it. And when I looked at the third edition, comparing them. These edits show up. Exactly, word for word.”

The revision hypothesis was challenged by a message that came a few years ago from Niccolo Guicciardini of the University of Bergamo in Italy. He had read about the mystery and wrote the collaborators to indicate one of the annotations referenced a work that was first printed in 1792. Ergo: at least that one annotation in the 1687 book could have been made no earlier than a few years before the onset of the 19th century. 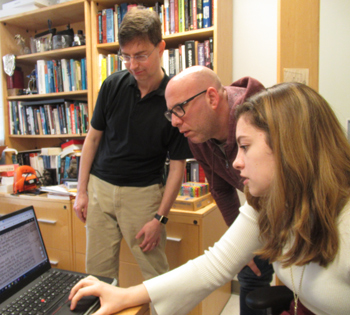 Guicciardini’s observation about a single entry did not by itself destroy the revision hypothesis. In addition to the verbatim appearance of annotations in the third edition, a number of other aspects supported continuing work along the revision track.

For example, Popper said that some of the more inscrutable notations were interpreted as possible marks used by typographers preparing for a new edition.

And so, the investigation’s focus remained on that comparatively small group of natural philosophers who had the scientific chops to comment on the work of Isaac Newton.

A controversy over calculus

Newton himself was ruled out early in the investigation; the handwriting was wrong for Sir Isaac. Dolt noticed several instances of a one-word annotation in the margins: “dico,” or “I say,” in Latin.

“This was huge for me,” she said, explaining that she thought she might have found an important element of the famous “who-invented-calculus” controversy that persists after centuries.

“Newton and (Gottfried Wilhelm) Leibniz apparently developed the early concepts of what became calculus, independent of each other,” she said. “There was a big controversy of who plagiarized whom.”

Dolt thought that the multiple “dico” notations might be assertions of primacy and she could imagine Leibnitz himself as the mystery annotator, marking up Newton’s book with “I say,” meaning “I said this first.”

“I was really excited,” she said. Such a discovery would be huge indeed. She researched online samples of Leibniz’s handwriting: no match with the mystery annotator.

Handwriting matches ruled out Newton, Leibniz and some other suspected annotators, so Dolt took a closer look at the annotator’s handwriting itself. She noticed it had a distinguishing element.

A distinctive letter in a collection of letters

“The P’s are distinctive,” she said, pointing to the p in “ipsius.” “It’s an open P.  See, it’s not closed on the bottom, and the upstroke goes up really high. It looks like an H.”

She shared her discovery with Gaidmore, who had arranged for Dolt to have access to the Special Collections’ Principia. By coincidence, Gaidmore used to work at the University of North Carolina, Chapel Hill, the repository of the Savage family papers.

Gaidmore noted that Rev. Savage was a polymath in his own right and is credited with the discovery of the western gorilla while serving as a missionary in Africa. Through his UNC connections, Gaidmore was able to secure permission quickly for Dolt to gain access to the Savage family archive.

Dolt examined a letter from Rev. Savage to his son. The handwriting matched the important annotations in the Swem first edition of the Principia. The distinctive P’s were a clincher, she said.

Erlich, Popper and Dolt discussed the implications and questions prompted by her discovery at a meeting in early February.

The Principia left Rev. Savage’s hands in 1869, when he donated it to William & Mary. Erlich pointed out that the annotations were made more than a century after the book came off the printing press.

“Wouldn’t it be recognized as a valuable book even at 150 years old?” he asked, wondering that someone would mark up what was, even in the mid-19th century, a venerable first edition of a classic work.

“Not necessarily,” Popper replied. “People didn’t fetishize books back then the way they do now.”

The conundrum of “why?”

For now, Rev. Savage’s motivation in updating his first-edition Principia remains a matter of speculation. Gaidmore says he can’t say and is consulting the collective wisdom of the Special Collections staff. The motive remains at least as perplexing as the annotator’s identity had been.

“Why is he doing this?” Popper wondered. “Is he preparing to make his own edition? It’s clear he’s not preparing for a third edition, which is what we originally thought.”

Dolt is making arrangements for a trip to UNC, Chapel Hill to take a deeper dive into the Savage family papers. She hopes to find some answers, or at least some context, about the annotations and perhaps even a key to the annotator’s notations made in astronomical/astrological characters mixed with Greek letters. It has the appearance of a secret code, but Erlich cautions that it’s too early to say so.

Her work is a significant advance in the study of the William & Mary Principia, which has been a kind of an ongoing side project for Popper and Erlich. They like to find an undergraduate to spearhead the investigation — someone conversant in physics and comfortable with Latin — and a suitable candidate had not surfaced for a few years.

Dolt is a physics major and classical studies minor and just the kind of person Erlich and Popper look for to resume the Principia project. She was discovered when Erlich was subbing in Professor Marc Sher’s Modern Physics class one day.

“He was comparing something,” Dolt recalled. “And he said, ‘Then we write CF which means to be compared with for some reason. I don't know why.’”

After class, Dolt went up and told him why. CF stands for the Latin word “conferatur” which means “to be compared with.” She just had "conferatur" as a vocabulary word in a Latin class with Panoussi.

“He thanked me,” Dolt said. “Then asked: ‘Oh, do you know Latin? Would you be interested in a project?’ We met and I found that it was super interesting.”

Panoussi is not a part of the Principia working group, but she says she has been following Dolt’s progress.

“Caitlin was able to bring together her expertise in physics and her knowledge of Latin to unravel a really cool mystery,” Panoussi said. “I am very impressed with her initiative and ability to go through the annotations, which are probably written in Neo-Latin. It is extremely impressive that Caitlin was able to do this having only taken beginning and intermediate Latin at W&M.

“Caitlin’s project is a wonderful demonstration that Greek and Latin can still help lead to new and exciting discoveries,” Panoussi concluded. “Her project not only helps answer the important question of who the annotator was, but also enhances the value of this Special Collections holding for the future.“